Yesterday was apparently “National Teddy Bear Day” –I actually looked up whether it was Teddy Roosevelt’s birthday, and lo and behold, it was not!

One of the fun things about working at King Features is that there’s always a lot of licensed merchandise around the office. We don’t have a lot of teddy bears but we DO have a lot of Betties, and Bimbos, and Pudgies booping around! 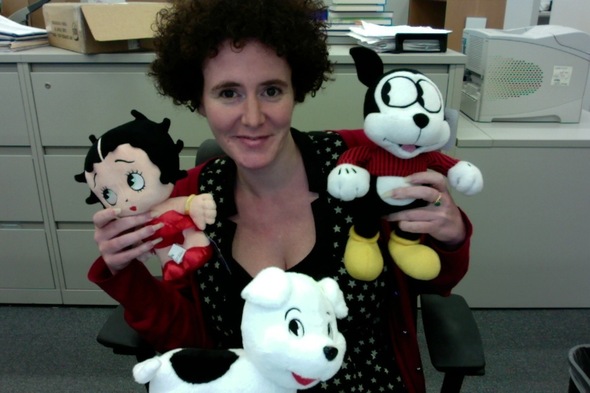 Today, I asked our cartoonists to tell me about toys they love to draw, or toys that inspire them.

I LOVE to draw toys. If you look closely in any number of Intelligent Life strips, you’ll randomly notice the characters often have toys sitting on their computers, on desks, on shelves or in backgrounds, sort of randomly. I do this because I just REALLY love to draw little innocuous fun things like Daleks or a TARDIS or Star Trek action figures, but also because I actually HAVE almost all of the very things I draw in my strip in these very places on my actual computer, desk or shelves. I’m surrounded by so many nerdy things (As I’m writing I’m looking at a Dalek on a shelf, a Batman on my computer tower, a Commander Riker action figure on my desk, a Popeye comic book, a couple of Flintstones action figures, a Darth Vader action figure… I could continue…) that feed my own strip with colorful inspiration, and it LOOKS like my actual life! (Which, heh, it IS.)

In Safe Havens, there was a notable appearance of a teddy bear at the baby shower commemorating the arrival of little Marlon in 2010.

I had a teddy bear with a button eye and worn out paws. He was our mascot when my friend Cathy and I ran in our school’s mock election. He got more votes than we did.

Zippy has to watch his toys carefully. Sometimes, they wander away and do bad things. All of the items in Zippy’s collection just happen to be in my collection, too. I keep a close eye on them every night.