Yesterday was Grandparents’ Day, so I wanted to take a moment to wish all the grandparents out there a very happy one.

My own grandparents were lucky enough to celebrate their 67th wedding anniversary last week– of course I have to take a moment to brag.  Here’s Rose and Frank celebrating: 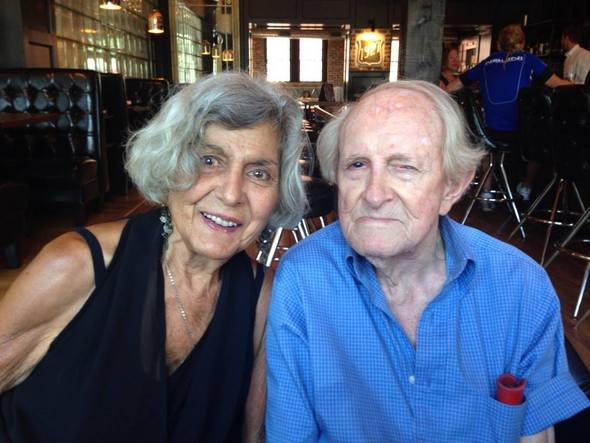 My grandparents were really instrumental in encouraging my love of comics. I know I’ve talked about them before, but when I was a kid, they moved from upstate New York to Lewes, Delaware, and their newspaper in Delaware had a very different comic section than my paper on Long Island, New York.  Being obsessed with King Arthur at the time, I became enchanted with Prince Valiant– but of course, since Prince Valiant was a serial, I would always be confused when I showed up to visit them, having missed weeks of the comic in the meantime.  (This was before the days of Comics Kingdom…)

So my grandparents started saving their comic sections for me, so I could read it.  Lucky me!

My grandfather was blind for a number of years, though he’s managed to recover some of his vision more recently (modern science is AMAZING).  While he was blind, my grandmother read and described the comics section to him every single day.

On my dad’s side, my grandmother’s refrigerator was a colorful repository of comic strips.  She would cut out and tape up her favorites, and I would spend ages staring at them– especially the intricately-cluttered Family Circus Sundays, that were chock full of amazing little details.  Her favorites to cut out were comics that had jokes about grandmas or grandparents in them.  Sadly, she passed away when I was a teenager, but I figured in the spirit of Grandparents’ Day, I’d fish out some comics about grandparents just like she would have.