August is Tree Check Month and Mark Trail is joining with the USDA to help teach us about the dangers of the Asian Longhorned Beetle, and how we can check our trees for infestation and prevent the spread of this deadly insect. After checking out the recent Mark Trail strip on the topic, please enjoy this week’s Archivist about the history of Mark Trail!

Over the century-plus of comic strip history, most will fall into common genres that all works of fiction fall into: Westerns, Detectives, Military, et cetera. But, “Mark Trail” is in a very uncrowded field — I guess we could call it the “Rugged Outdoorsman” category.

“Mark Trail” was created by Ed Dodd (1902-91), who was a true nature lover. As a youth, he worked with Boy Scouts of America founder, Dan Beard, eagerly learning about woodland creatures and outdoor survival skills. 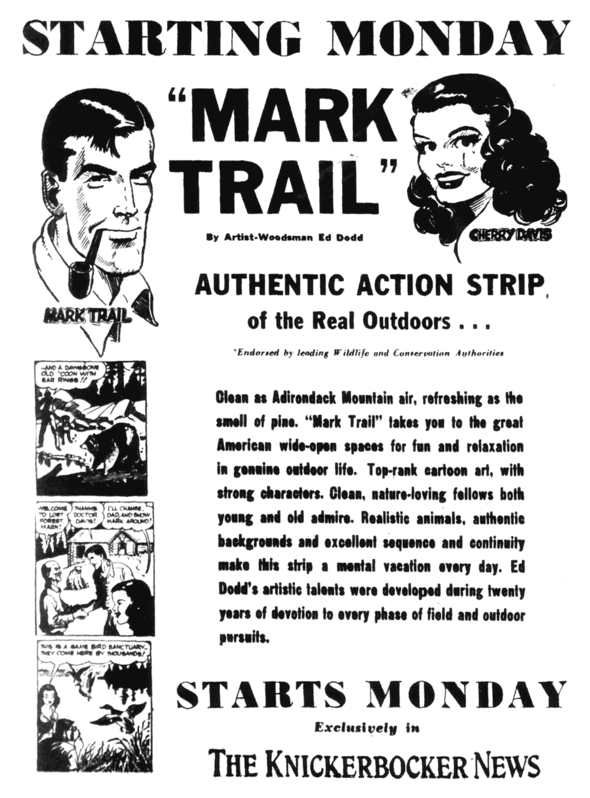 He was also gifted in cartooning. In the 1930’s-40’s, he did moderately well with a backwoods family panel that he sold to United Features Syndicate, but his true passion for nature led to “Mark Trail” in 1946. This was initially distributed through the New York Post Corp. Syndicate, a venture that lasted only a few years before merging with another small company, the Hall syndicate, and eventually becoming field, and NAS.

The strip was such a success that Dodd became closely associated with the cause of conservation. He’s as often described as a “naturalist” as he is a cartoonist. In a way he was, perhaps, the John James Audubon of the funnies.

The daily stories of “Mark Trail” concerned the soap opera-like efforts of Mr. Trail to preserve his beloved wilderness from poachers, developers and loose runaway crooks and careless campfire builders. His girlfriend, Cherry, and lovable Saint Bernard, Andy, would often become the catalyst for chases and searches; but, the Sundays were given over to nature lessons, educating readers to the world of all manner of animals, fish and birds. Dodd was what we would call an environmentalist today.  In 1951, he was named head of the National Wildlife Federation, and supported many educational projects through the years, sometimes appearing in TV documentaries on conservation.

Dodd drew the strips by himself until the early 1970’s, when he first had assistance by Tom Hill, and then in  1979, by Jack Elrod, who eventually took over the strip. Mr. Elrod recently retired, with new artist James Allen taking over just this April. Here’s some choice “Mark Trail” examples through the years: 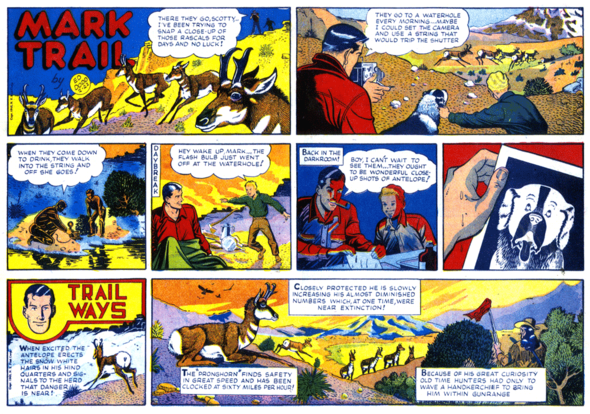 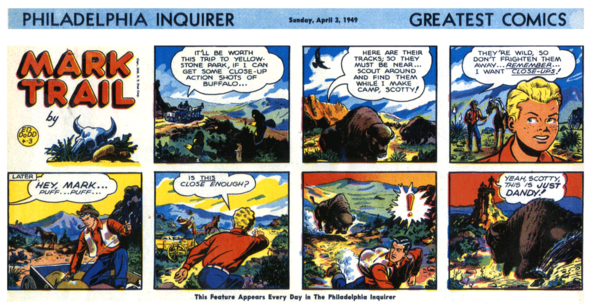 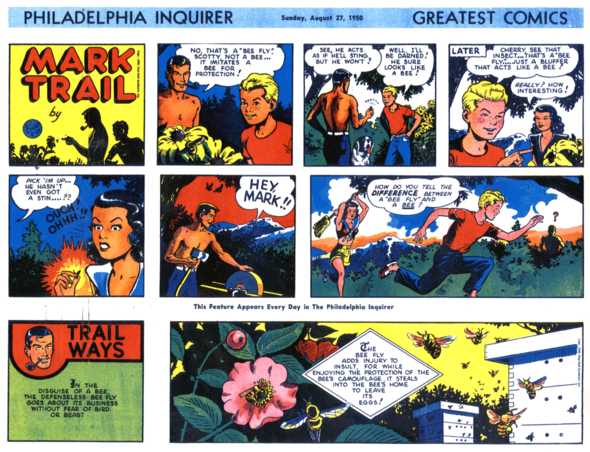 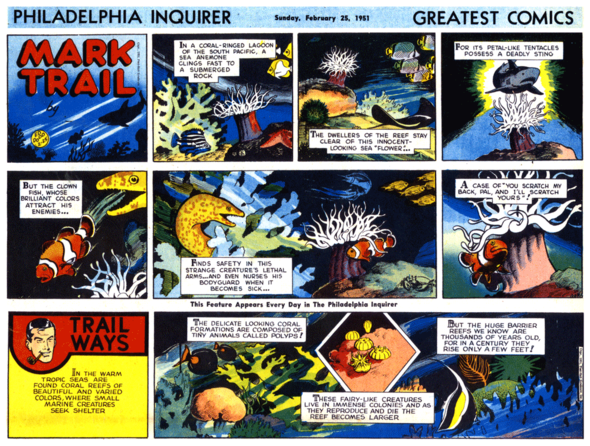 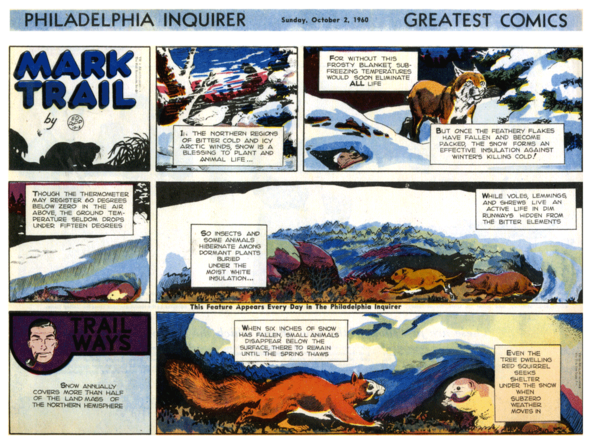 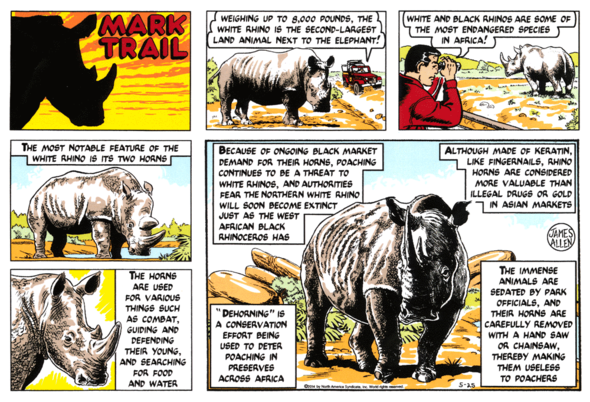 To John Anthony Graziano:
You could very well be right that my Bizzy Buzz Buzz doll could be a prototype; after all, it was in the possession of King Features with some other toys, long after anyone remembered BBB. Though something strikes me odd, and that is … this one, the one I own, looks more like the character than the other ones. Note for instance, the hair on the prototype is made of felt cut to approximate Bizzy’s bangs,  whereas the two “troll” ones have yarn or what appears to be acrylic brush filament. Doesn’t the felt look more like the cartoon’s hair? The nose looks too bulbous on the production doll, too.

Also, the eyes … look at Bizzy’s peepers. They’re “inkdot” eyes, and proto’s solid teddy bear- type eyes are closer to that than the production samples, with more realistic eyes, with whites and pupils. Kind of creepy, too, but what do I know? Anyone know if the tag we showed last week was on the production models?

As for the Bizzy Buzz Buzz scribbling mosquito toy, It seems it was offered after the doll character. I can’t find any reference to it before 1966. Perhaps, the term was uncopyrightable.

To Danidarc:
If Bizzy Buzz Buzz was a long name, I think it still would’ve been amusing enough for kids to like saying it. She seems to have just been an unexciting doll, making it to the stores for the Christmas 1964 season only.

What were some of the other girls’ toys that fall? There was Barbie and her extensive/expensive wardrobe; a doll with hair that could be extended longer and longer that might be set different ways; and a high fashion baby doll with Gallic aspirations called “Little Coquette.” Also, lots of play-infants that play-slept, play-drank, and play-relieved itself.  The little boy of 1964, that was me, is well nauseated.

However, the biggest thing in the doll world that year were talkers, most famously “Chatty Cathy.” You’d pull a rip cord in her back, and a small record would play back one of several witty observations from Miss Cathy.

Actually, I have no recollection of what she said, or might reasonably convey in the two–second running time of the recording. Maybe, a cry for help? I don’t know. In the spirit of full throated, freewheeling American enterprise, multiple knockoffs of Cathy were also on offer as well,  including “Charmin’ Chatty” and “Blabby Baby.”  Bizzy didn’t do anything, she wore old lady clothes and even stayed dry as a bone, so you can see how she got lost in the shuffle.

When Billy DeBeck started putting hillbilly characters into “Barney Google” in the 1920’s, he began collecting background data on that region, earnestly studying the manners, customs and dialect of the Ozarks to give his creations an authentic air. Fred Lasswell talked about a huge bookcase full of material Debeck had amassed by the time of his death.

The word “bodacious” is a conjunction of bold and audacious, and is first known to be recorded in 1832 as “bowldacious,” according to WorldWideWords.org.

Back with more next Thursday …