You might recall back in March, I talked about the kinfolk of hillbilly star, Snuffy Smith, including his little-known niece, Bizzy Buzz Buzz. See here.

She only appeared but three times in Barney Google and Snuffy Smith fifty years ago, on consecutive Sundays — two of which were seen in the earlier posting. Artist Fred Lasswell invested no more time than that in her, though she appeared in some of the TV cartoons and there was licensing of the character. Here’s the second of the trio, 25 October 1964.

Inspired by that post, new interest in Bizzy led to John Rose bringing her back this month for a weeklong series. Here’s three strips from the series: 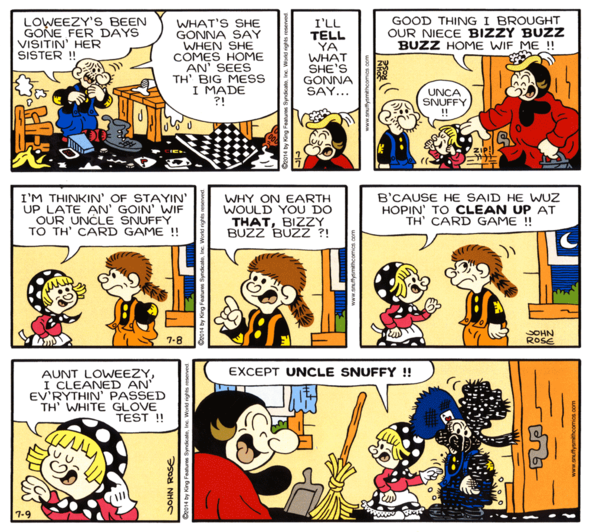 John Rose sent me this bodacious photo from a fan of yet another Bizzy doll, another rag doll incarnation now with the “Troll” face. I wonder if Gund made this doll, both sizes, with an existing Troll face first, and then got around to making a face mold that actually resembled Bizzy when it sold enough to warrant an upgrade. Thanks Mr. Rose! 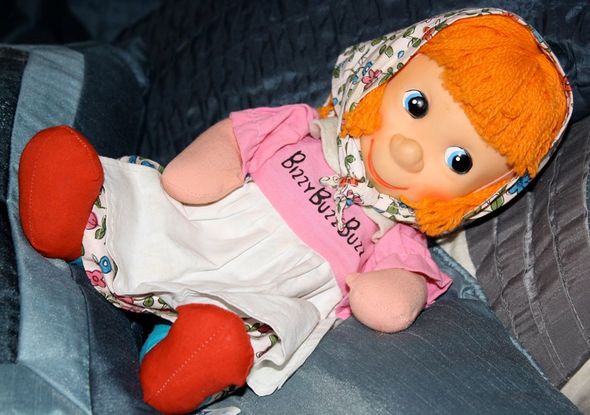 The licensing that I refer to was the Gund Manufacturing Company’s  Bizzy doll. This was a soft cloth doll with a rubber-molded face. I own the sample that was sent to King Features. 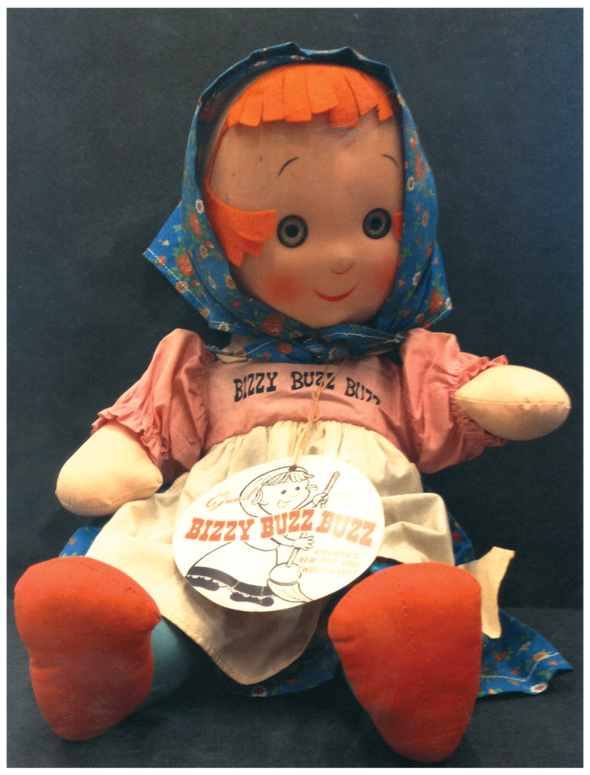 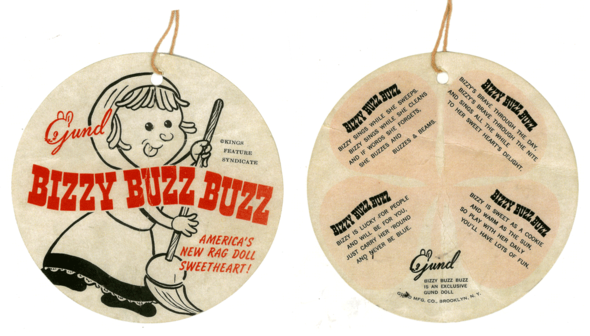 THE BIZZY BUZZ BUZZ DOLL, AND A CLOSE UP OF THE TAG. LASSWELL DIDN’T DRAW THE CARTOON. IT WAS PROBABLY DRAWN BY THE SAME GUY WHO WROTE THE COPY!  IS IT LEGAL IF IT’S MARKED “KINGS FEATURE SYNDICATE” INSTEAD OF “KING FEATURES SYNDICATE”?

The odd thing about this doll is that there seems to be another version, one that in fact looks more like a “Troll” than Miss Buzz.  In the early 1960’s, the Trolls were very popular with girls. They were put out in various sizes and licensed items like clothes and jewelry. There were even knock-offs, like the “Wishniks.”

I’m just speculating, but since GUND was a big player in the toy world, they probably made ”Troll” or Troll-knockoff dolls of their own, and somehow, they were putting out BBB dolls with Troll faces and hair like this: 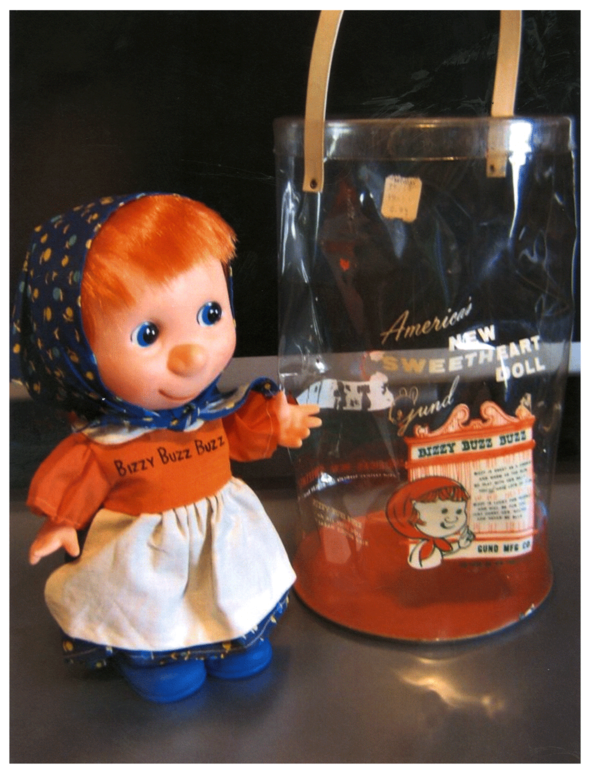 Notice in the picture it has its original carrying bag, which has the Lasswell-like Bizzy on it.  It looks a bit smaller than the rag doll, and this one has plastic hands and feet. It could be they just never got around to making a proper BBB face for any but the larger model. Nobody knows much about it now, maybe an interested fan can contact us.

Thanks this week to John Rose, Claudia Smith and Cole Johnson for the assist.

To Cephasatl:
I’ll do something with Tim Tyler someday-It was never one of my favorites, but neither was Captain Kate.

To Danidarc:
TIGER by Bud Blake began in May 1965. Before that, he had a panel called “Ever Happen To You?” that I thought was funny. Take a look HERE.

See you next week.