Ask a Cartoonist: Summer Memories and the 4th of July

If you’re here in the US, I hope you’re getting ready to celebrate a great Fourth of July!

Summer’s in full swing here in New York, with cookouts, ice cream trucks, and fireworks on the horizon.  This week, I asked our cartoonists to share some of their summer or Fourth of July memories.

My favorite Summer Scenes are from the Bunny Bashes…the 33rd one just last week…It is always great to see everyone enjoying the day. –Bunny Hoest, The Lockhorns

I think being in the army ruined 4th of July for me. After spending so much time as a soldier throwing grenades, firing cannons and machine guns, learning to kill people I’m turned off by explosives. I think they should invent a firecracker that sings a song, “Baby you make my heart go BOOM!”
–Mort Walker, Beetle Bailey

My best summer memory is one that comes around every year. On the last day of school. I always thank my lucky stars that I won’t ever have to go back to grade school ever ever ever again!!
–Margaret Shulock, Apartment 3-G and Six Chix

Listening to my brother, Tony, who was a DJ on a pirate radio station, ‘Radio Scotland,’ dedicate ‘Rain’ by the Beatles to me. It was my 14th birthday and I was walking down Great Western Road (Glasgow) after attending a gruelling swimming lesson. The date was July 1st 1966. I remember It was overcast… with occasional showers. –Kieran Meehan, Pros & Cons

I adore summer and most of my best memories involve being at the beach with my brother and sisters, swimming, diving and coming home beachy, covered in sand and salt. –Alex Hallatt, Arctic Circle

When I was a child, I remember that we once had turtle races on the Fourth Of July! Each child that wanted to participate had to go out in the woods and catch a box turtle. Then, using acrylics, we each painted our turtle’s shell red, white and blue in our own patriotic design. We drew a big circle in the dirt and placed our turtles in the center and the first turtle to walk pout of the circle won the race! I can’t remember if I won or lost, but I sure had fun painting the turtle’s shell! –John Rose, Barney Google & Snuffy Smith

Here’s an image of fireworks through the eyes of a five-anna-half year old. — Marcus Hamilton, Dennis the Menace 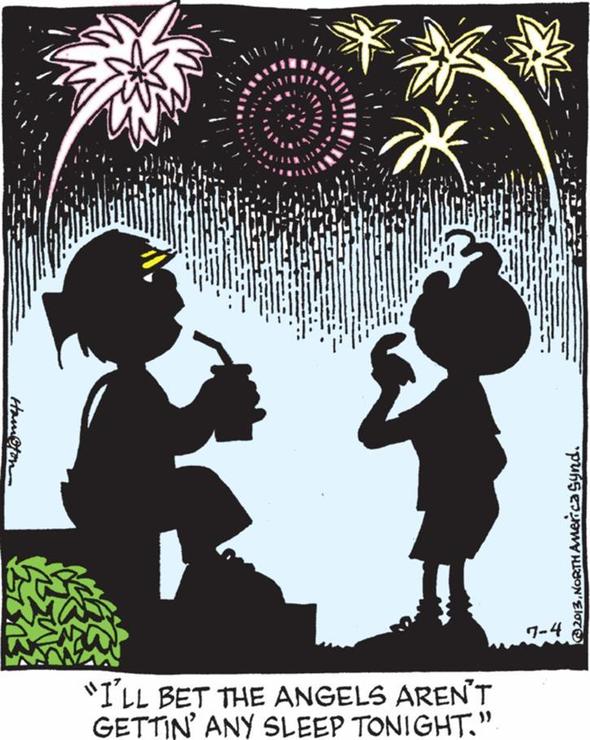 And here’s a favorite summer comic from Bud Grace of Piranha Club: