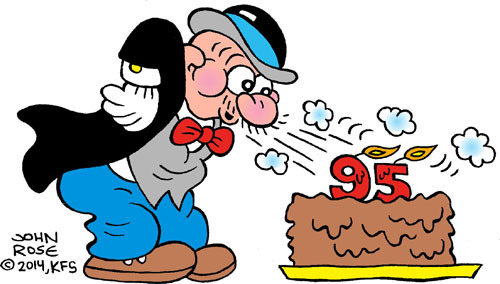 This week, Barney Google turns 95 years old!  To celebrate the anniversary of the iconic cartoon character, I spoke with John Rose, who currently brings Barney Google and Snuffy Smith to life each day! 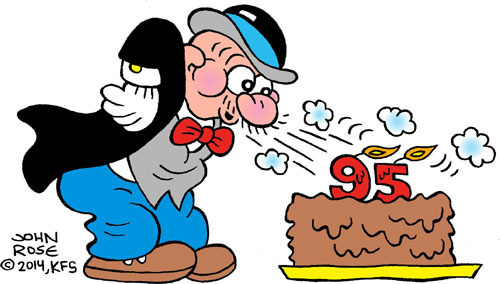 Can you give me your impressions of helming Barney Google & Snuffy Smith in the anniversary year?

I have felt that every Barney Google and Snuffy Smith comic strip I have drawn since 2001 has been an amazing honor.

What is it like to work on the longest continually-running comic strip still in syndication? Does it bring any particular challenges or pressures?

I feel that I am bodaciously blessed to get to do this every day! I still have to pinch myself to believe this opportunity came to me! Other than the daily deadline pressure that all comic strip cartoonists face, the biggest challenge is keeping it fresh, funny and relevant after 95 years. We work really hard to strive to bring readers a great comic strip every day. And by “we,” I mean myself and all my friends at King Features–I could not do this job without all of them.

You’ve been bringing Barney Google back more and more in the past few years— what led to this decision, and what are your favorite things about getting to write the character?

I frequently do Snuffy Smith chalk talks to retirement communities and civic and corporate groups. I really enjoy getting out of the studio every so often and meeting fans of the strip. One question that I almost always got asked from the audience was, “Whatever happened to Barney Google and Spark Plug?” So, a couple years ago, after a chalk talk when I was asked that question, I thought it would be fun to bring the characters back. I approached Brendan Burford, King Features’ editor, with the idea and he was all for it. The first week-long visit was so popular with readers that we brought Barney and Spark Plug back for a second week later in the year. Again, the visit was very well-liked by fans of strip. So, since that time, Barney and Spark Plug have had two separate week-long visits each year. They are two of the most fun weeks in the strip to create each year! As far as writing, Barney brings a new element to the strip. He is from the big city of Chicago and likes to come to Hootin’ Holler to get away from it all. Stories of his big city adventures add a new dimension to draw upon.

What’s your favorite thing about being part of Barney Google & Snuffy Smith’s legacy?

I have loved every minute of working on the strip, since I started as Fred Lasswell’s inking assistant in 1998. It was incredible to get to work with Fred and then it was such an honor when Jay Kennedy selected me to be the strip’s cartoonist in 2001 after Fred’s death. I enjoy everything about it, but my favorite part is probably being credited with bringing Barney Google and Spark Plug back to the comic strip as semi-regular characters again. Billy DeBeck created two wonderful characters and until I brought them back in February of 2012, the last time they had appeared in the strip was 1997 (and even then, for years, they only made infrequent appearances, showing up for a day a year or so). Barney and Snuffy had the last of their big adventures in the 1950’s when they went to Washington, DC. After that, Barney was slowly phased out over time.

How do you feel the comic has changed over time?

Like anything, over time changes occur. Under DeBeck, it started out as a big city strip, then later Snuffy and his family entered the picture and added the rural element. Snuffy entered the Army in the 1940’s and Barney the Navy. I think this story line lasted about 5 years. And then, as I mentioned, Barney was phased out by Fred and the focus totally became the rural community of Hootin’ Holler. Billy DeBeck and Fred Lasswell created a wonderful cast of characters that I am very fortunate to work with every day. I have made a few changes since 2001. I have added a few regular characters: Granny and Grampy Pritchart and Lureen Jenks, the man-crazy single female, just to name a few. I have made all the characters literate, except for little Tater! I often show Snuffy and Lukey reading the newspaper and commenting on events of the day, but only in the most general sense.

Thanks, John!  And happy birthday to our favorite googly-eyed nonagenarian!   You can read more Barney Google and Snuffy Smith this week for a very special visit from Barney Google himself (and his beloved horse, Sparkplug)!