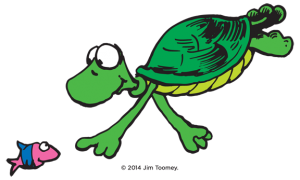 Today is World Turtle Day, and what better day than today to shine a light on Sherman’s sidekick, Fillmore the sea turtle, and his amazing species.

Below is a Sherman’s Lagoon comic from June 2013 where Fillmore weighs in on his pricelessness.

Below are some amazing ocean turtle facts from Zoomed.com: