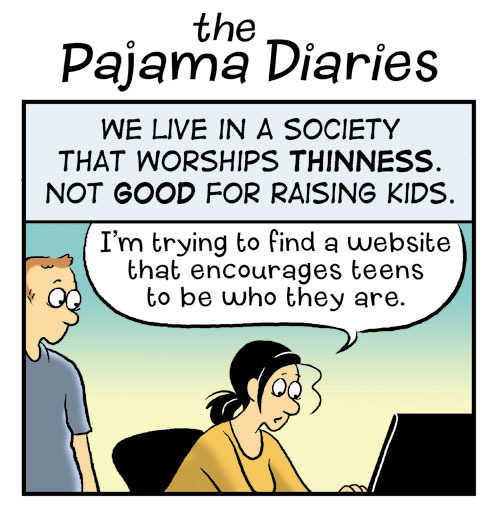 Starting tomorrow, May 20, The Pajama Diaries will be featuring a story about preteens and body image.

I remember being a preteen, and how, apart from all the other awkward bits about growing up at that age, it’s definitely the time when you start to become self-conscious about your appearance.  I know I went through a phase of hating my dark red, curly hair, because it stuck out (literally AND figuratively), and started worrying about which parts of me looked too fat.  While I never suffered from an eating disorder, I had friends– both girls AND boys– who did.

Terri Libenson, the creator of The Pajama Diaries is a mom of two preteen girls, and talked to me about her decision to do a story about this topic. 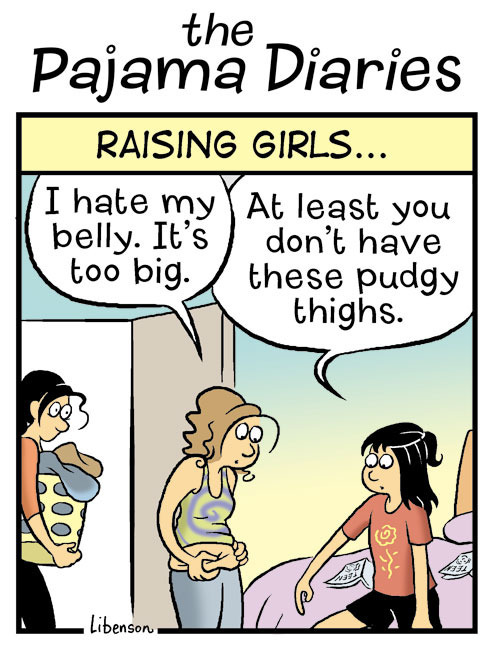 “I did this story line because my daughters are at the age where they are becoming more critical of their bodies. This hits so close to home because I, like many other women, developed an eating disorder earlier in life. Mine was in college. Luckily, it was short-lived and I consequently developed good habits over the years, like eating nutritiously and exercising. I try and model health-conscious habits and a positive outlook for my daughters. I never criticize their figures and – just as importantly – I try not to criticize my own (not in front of them, anyway!).

A real problem is with the rest of society: peers, media, and the food and fashion industry. I find it incredibly confusing, so I can’t imagine what it feels like for young, vulnerable girls. This is why this series is so important to me. I’m sure this won’t be the last time I approach it.”

Body image issues are a tough subject to talk about for both parents and kids.  Kids are often embarrassed to tell people if they’re feeling insecure about themselves, and sometimes they hide it so well that it’s hard for parents to notice.  That’s why I, personally, thought that it was great that Terri chose to tackle this sensitive subject– the more people talk about these things out in the open, the easier it is to help kids feel like it’s okay to tell someone if they have a problem, or to see that maybe they’re being more critical of themselves than they need to be.

Terri also wrote a great blog post over on the official Pajama Diaries website; you should check it out!