Inspired by the current release of the Noah movie, I’ve dared to go to the well of James Swinnerton cartoons once again. He was quite a comics pioneer, right in at the start of comics in the 1890’s, and creator of many series over the years. 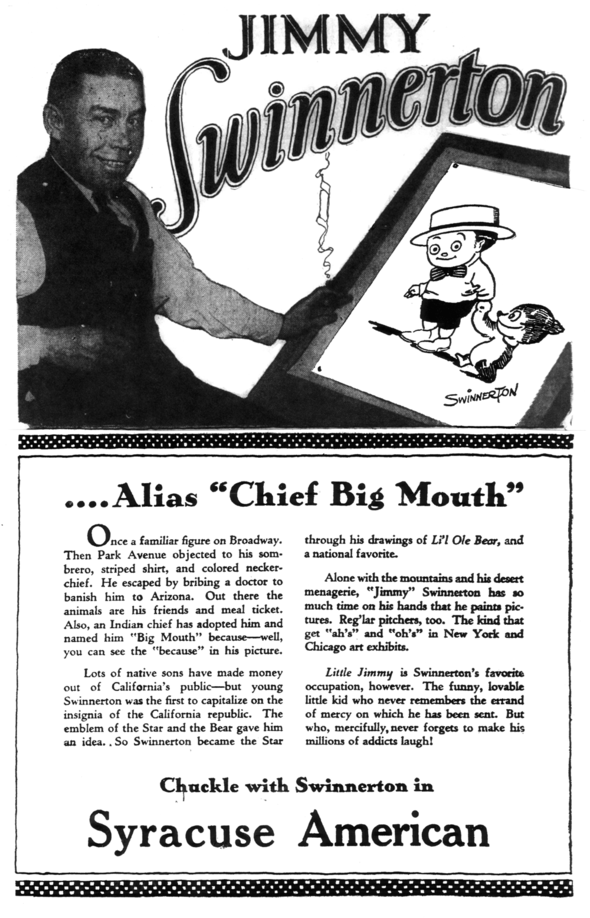 An early one of his was based (very loosely) on the story of Noah and the Ark, and what would it be like after the soggy forty days and nights ended and he started a civilization on the titular “Mount Ararat.” The culture was amazingly close to that of early 1900’s America, where the animals all dressed in modern clothes and were able to function like humans of odd sizes and abilities. A couple of samples can be seen HERE and HERE.

That series ran from 1901 to 1904. Obviously, he enjoyed Noah’s story and the animal characters, and revisited some of them seven years later with one of the recurring characters, Mr. Lynx. The series was nominally called “Mt. Ararat” again, but more often just the word Ararat  appeared in the title or even not at all.

Lynx was one of Swinnerton’s amorously unprincipled critters, a soulmate of fellow feline Mr. Jack. He was incredibly rich, and madly infatuated by Miss Tiger, who would have nothing to do with him. Lynx’s story thrust was his adventures stalking her and his comeuppance. It ran in Hearst sections in 1911 and 1912. See another one HERE. 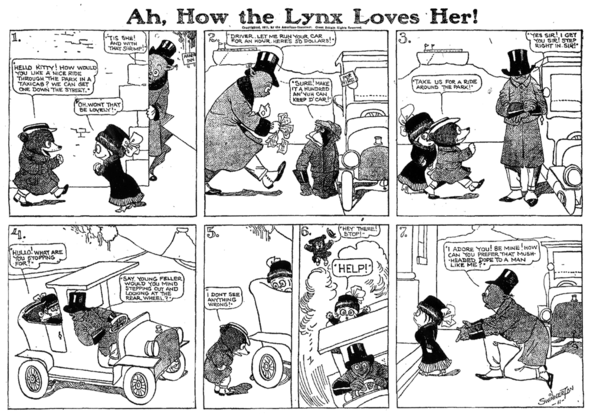 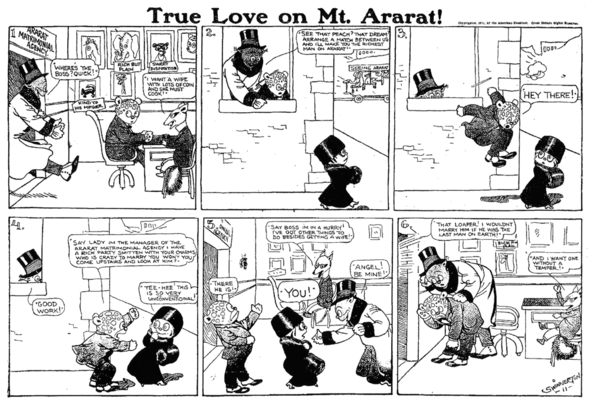 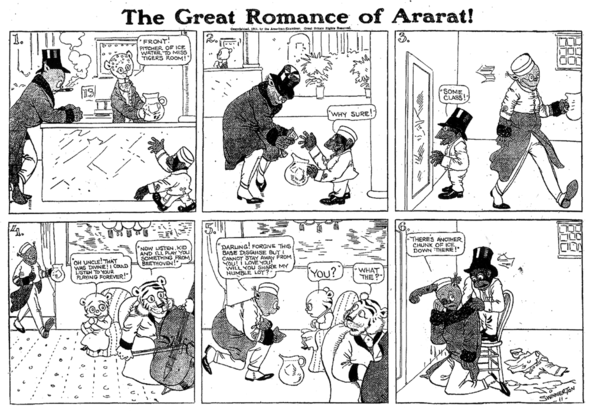 SOME EPISODES IN MR. LYNX’S PURSUIT OF MISS TIGER (26 NOVEMBER,3 DECEMBER & 24 DECEMBER 1911. *Note the Ark is visible in the first strip.

Then, another seven years passed and in 1918-19 Swinnerton gave the idea one more look. This time it would be called “In The Good Old Days,” and brought back Noah, who’d been absent in the 1911 turn. The new version differed from the first two because instead of what happened on Mt. Ararat, this took place aboard the Ark before they made land. Noah wore a sort of toga that would be appropriate for ancient times, as opposed to the modern costumes he sported back in 1901. The animals didn’t bother much with clothes at all. The Ark was run like a cruise ship, with shops, games and room service. The humor was based on the temperaments of the different species and their petty conflicts. You could say it was a forerunner to Boner’s Ark, (HERE) which Swinnerton lived to see. 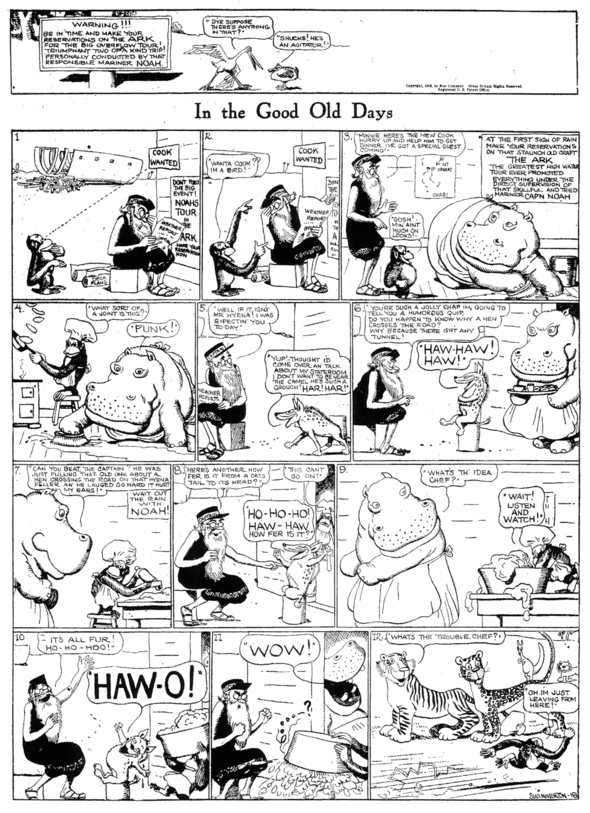 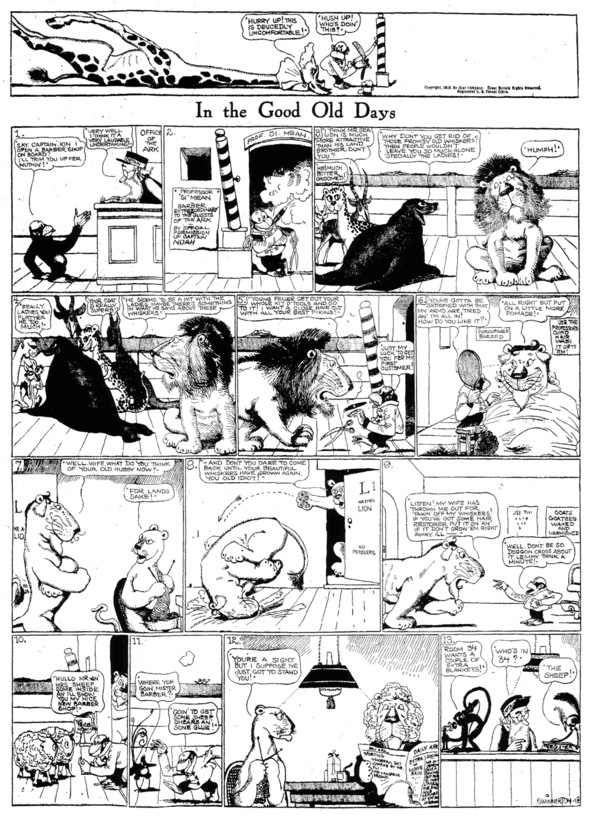 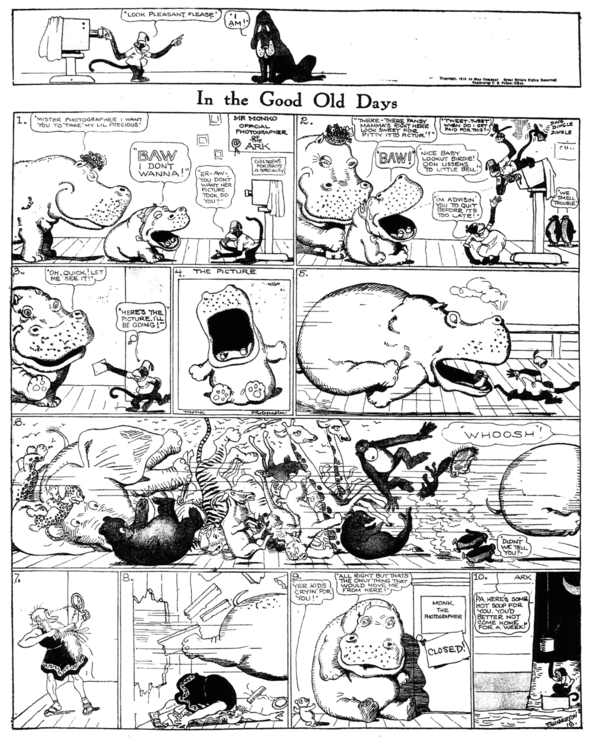 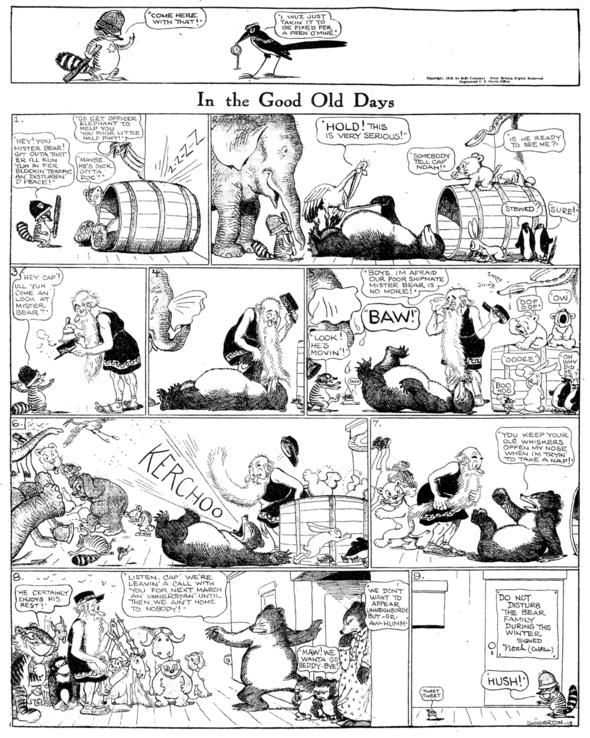 Even with the silly situation comedy, it’s closer to the original story than the current Hollywood product!