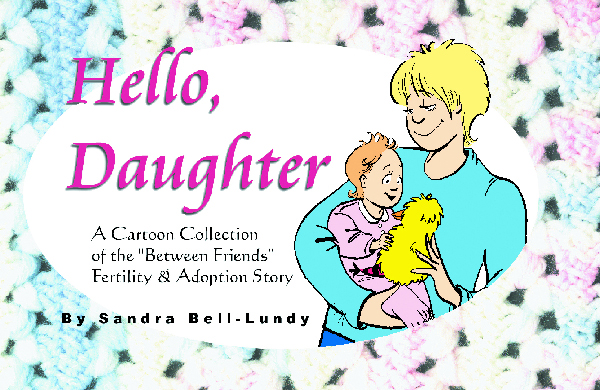 I have donated 5 copies of my book, “Hello, Daughter” to the Kenosha Festival of Cartooning indiegogo campaign.  I’ll sign and do a doodle too.

This book is out of print and the only copies left are from my own limited supply.

The book is a collection of all the strips pertaining to Harv and Susan’s struggle with infertility and the adoption of their daughter, Emma.  Included in the book are the background influences behind certain strips as well as reader response.

The above strip was written in 1997.  Here is the added background inspiration for this strip:

My doctor asked me one time if I would draw a cartoon about fertility for him.  I wrote the above strip for him and eventually used it in my “Between Friends” story line.

In the original version of this strip, I used the word “sperm” instead of “sample”. This was the only time I was censored by my syndicate editor. I was told they would prefer it if I tried to make my point without saying “sperm” but would agree to my using it if I couldn’t (make my point otherwise). As it turned out, it wasn’t a problem to change it. I think the message is clear.

Click here to go to the Kenosha web site.