Did you know today is NATIONAL TATER DAY? That’s right! And while I have been informed that the intent of this holiday is to celebrate the much-beloved lumpy root vegetable (mmmmm, potatoes), I can think of another important Tater right here at King Features. 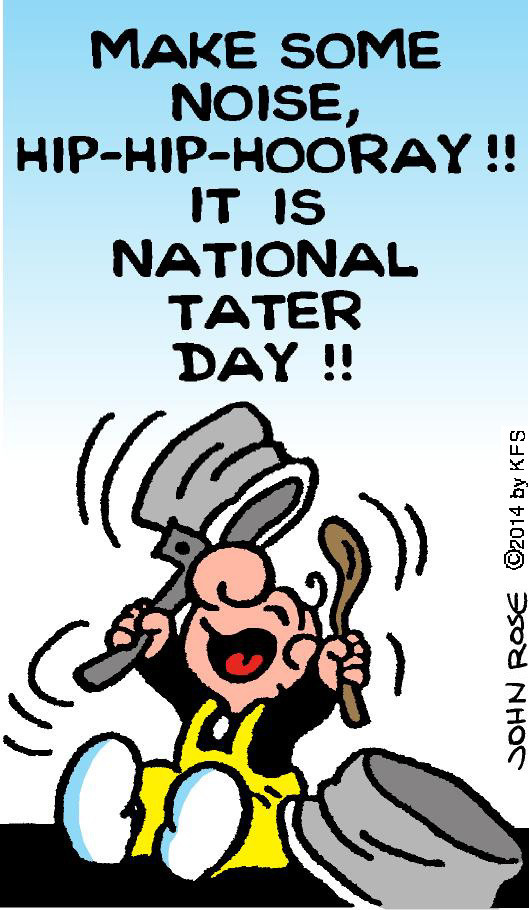 So, while I’m eating my mashed-potato loaded baked potato with a side of fries, I thought it would be a good time to talk to John Rose about Tater “Smif,” as the Hootin’ Holler locals like to say.

Tater is the spitting image of his Paw, only shorter! Li’l Tater is the apple of Snuffy’s eye and the bane of Jughaid’s existence! Tater was created by my former mentor, teacher and friend, the wonderful cartoonist Fred Lasswell. Fred always referred to Li’l Tater as Loweezy’s change of life baby. Tater was “born” on November 20, 1967 and this strip marks his first appearance.

Tater is mostly seen in his Maw’s arms or crawling around the house. He loves playing with Jughaid, Ol’ Bullet and all of the farm animals outside their mountain home. Occasionally, he goes to a preschool class(which is known as “kiddygarten” in Hootin’ Holler!). When I do cartooning presentations in schools, the children laugh out loud when I draw Tater with that one little hair shaped like a question mark in the center of his little bald head. Over the years that I have been drawing the strip, I have been surprised at the large amount of adults that have told me they were nicknamed Tater or Snuffy after the characters in the comic strip!

As a character, Tater is a joy to work with and he is a lot of fun to draw! On this National Tater Day, I hope you enjoy reading some of my favorite strips that feature Tater!