News From Around the Kingdom: Spring Break, Spinach and Filing Taxes

Have you filed your taxes yet? Not to worry, neither has Hägar! What else is new, right? Read below to catch up on the latest News From Around the Kingdom!

Mary Worth has taken up a new residency in the Kingdom. She has her very own website. Check it out here.

Anticipation is building for the release date of Flash Gordon #1. Read an interview about it here.

Hilary Price was interviewed by her local TV station and reveals the identities of her favorite female gag cartoonists.

Alex Hallatt was inspired by her local pub to create a painting. It gives new meaning to the phrase “mother’s milk.”

Snuffy Smith sighting in The Happiest Place on Earth!

Jeff Parker finds some creative uses for his plethora of “Dustin” business cards. For a comic strip about a guy who isn’t gainfully employed, it’s very ironic that the strip’s writer would order 1,000 business cards!

Terry LaBan opines about the stereotype of “Doofus Dads.”

The arrival of Spring means different things for two of the characters in “Hi & Lois.” 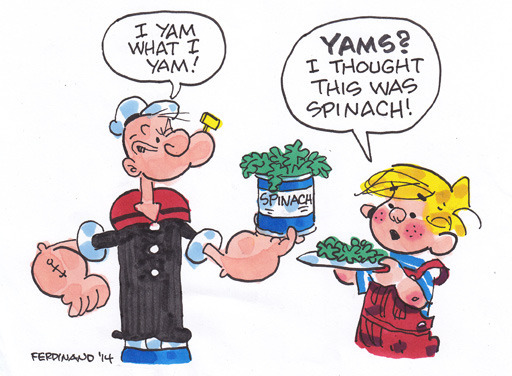 Stop by again next Friday for the Kingdom recap of news. Have a great week!