We’ve got one more week of Women’s History Month left.  We’ve talked about our favorite female cartoonists from all over the place, and from throughout history, but before the month is out, we wanted to celebrate the very awesome women of King Features.

Ever since Grace Drayton became the first woman syndicated by Hearst (read more about her here in this great post by our Archivist), King Features has syndicated top-of-the-line, awesome work by women cartoonists.

Last week, Alan Gardner of the Daily Cartoonist posted a great videoof our very own Hilary Price (who’s been nominated for the Reuben Award, cartooning’s highest honor, this year!) talking about being a woman working in the field of cartooning, which has traditionally been a male-dominated career.  It’s definitely worth a watch!

Right now, we have eleven amazing features being created or co-created by women:

I grew up reading Apartment 3-G: the girls always seemed so sophisticated.  Now, I love the character dynamics between three such different personalities all living under the same roof, and the tongue-in-cheek wit Margaret Shulock brings to the strip.   Margaret’s comics on Six Chix are a nice contrast to her work on Apartment 3-G, where we get to see her use a warmer style of humor.

Alex Hallatt does an amazing job combining serious commentary about the state of the environment and a sincere love and enjoyment of everything in nature with an hilarious sense of the absurd.  Lenny the Lemming in particular is a favorite of mine–  his innocence combined with bizarre wisdom, he always reminds me of an Arctic version of 30 Rock’s Kenneth the Page.

It’s sometimes hard to believe that one person writes all three of the characters in Between Friends–  but Sandra Bell-Lundy is behind high-strung Susan, free-spirited Maeve, and no-nonsense Kim, and makes all three of these women feel so very real.  Though I’m a bit younger than Sandra’s characters, I doubt there are many women who can’t sympathize with them.

Patty LaBan works with her husband, Terry, on Edge City, and helps give it its super-authentic, real-life feel.  One of the best things about the Ardins, to me, is the way the LaBans illustrate the generation gap, with all four members of the family often struggling to understand each other– and, of course, Len’s sometimes-flailing attempts to be the “cool dad.” 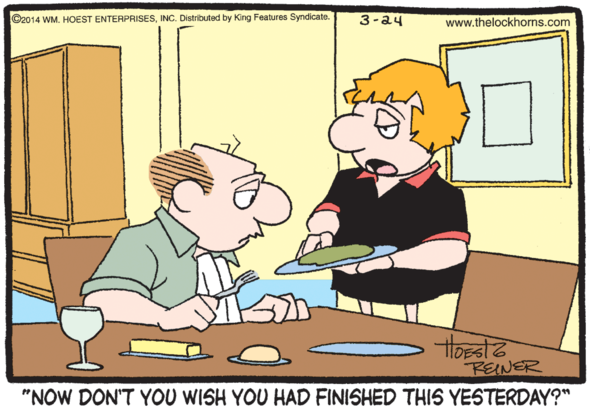 Anyone who has ever met Bunny Hoest can tell you that her sense of sarcasm is only matched by her absolutely infectious enthusiasm– and it shows in the Lockhorns.  Leroy and Loretta are the king and queen of bitterness and cynicism, and I love them for it.

Karen Moy writes Mary Worth with a charming, sympathetic touch that brings Mary and her friends in Santa Royale to life.  As Mary winds her way through the lives of the people around her, even the smallest guest characters seem to sparkle with their own personalities thanks to Karen’s writing.

Jill Kaplan is one of the funniest women in comics, thanks to her creator, Terri Libenson.  The frenzy of her dual mom-work persona is a constant source of hilarity, whether you’re a mom, a working women, or, well, a woman at all.  And as the Kaplan girls get older, Amy and Jess are fast becoming powerhouse characters in their own right.

Hilary Price’s humor is brilliant.  Whether she’s spouting relationship wisdom, punning on current events and pop culture, or simply serving up a cautionary tale about cat hair, I don’t think I’ve seen an unfunny “Rhymes With Orange” strip in my life.  And her huge cast of characters are always charming and absurd.

Susie MacNelly has been a galvanizing force behind Shoe for many years now– thanks to her, we have been able to enjoy the off-kilter, bird-populated world originally created by her husband, Jeff, and their rather zany opinions on politics, journalism, and, well, anything under the sun, really.

Last but not least, Tina’s Groove is a must-read for anyone who has ever worked in food service (or who knows someone who has).  Rina Piccolo’s spunky art and her wildly varied cast of characters make Tina’s Groove an absolute delight. Tina’s ability to stay sane in the face of her crazy customers and coworkers is a feat beyond belief!

Do check out all these fabulous comics during Women’s History Month– and during the rest of the year, too, of course!