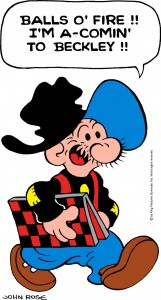 BARNEY GOOGLE AND SNUFFY SMITH cartoonist, John Rose, will be doing a Snuffy Smith Chalk Talk and book signing in Beckley, West Virginia to promote the release of his new book, “The Bodacious Best of Snuffy Smith.” In his chalk talk, Rose will talk about his career as the Barney Google and Snuffy Smith cartoonist, show samples of his work and draw some of the comic strip’s most popular characters for the audience. Y’all come, ya hear!