Editor’s Dispatch: At the Movies! 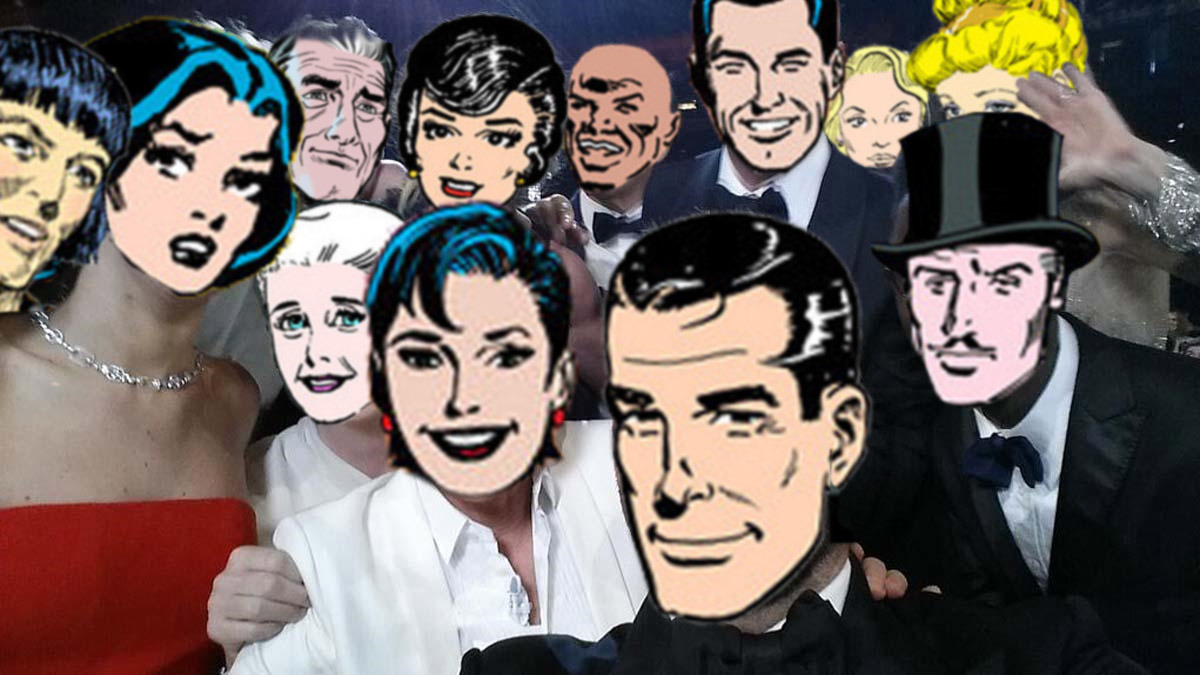 Hey, look at all our favorite cartoons taking a selfie at the Oscars! 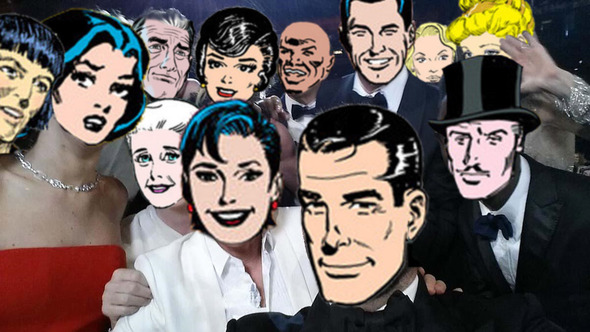 Around this time every year, when I see Oscar nominations and winners and lots of movie buzz all over the place, I start to think about the giant gaping holes in modern cinema: that is, films about classic soap opera and adventure strips.

I mean, comic films are all the rage these days, right?  In the face of huge Hollywood blockbuster franchises, who’s to say that the girls from Apartment 3-G couldn’t face off against The Avengers, or Judge Parker couldn’t take on Christopher Nolan’s Batman, huh?

I like to daydream a lot about my fantasy casts and plots for films based on these classic comics, so I thought I’d share some of my favorites with you:

I’d love to see a version of Apartment 3-G that brings the wit AND the danger: three twenty-something professionals movie into an apartment in New York City that just seems too good to be true– and maybe it is…  Their new home houses a mystery, and they have to solve it before time runs out!  Meanwhile, the girls are getting to know each other,

and sharing their dating woes over cocktails.  Think Clue meets Sex and The City! This dark comedy stars three excellent young comedic actresses.  Naya Rivera, known for her role as “mean girl” Santana on Glee, is perfect for Margo.  Brassy Emma Stone is fun-loving Tommie, and Amanda Seyfried is our pick for naive, romantic LuAnn.

So I’m thinking Judge Parker would make a super comedic action-adventure flick full of legal drama.  My pitch: an unsolvable crime puts dashing attorney Sam Driver back in touch with his old mentor, Judge Alan Parker.  The mystery takes them to Spencer Farms, a successful horse farm, where Sam meets Abbey Spencer and falls hopelessly in

love– but could it be she’s hiding a secret of her own?  Pierce Brosnan of James Bond fame stars as our beloved Judge Parker, Ryan Gosling plays Sam, and Isla Fisher plays heiress and horse trainer Abbey, for a cast with proven dramatic and comedic talent.

Mandrake is totally due for his time on the silver screen, and I’d love to see a big-budget fantasy adventure based on Mandrake’s exploits.  Mandrake, the famous stage magician finds himself and his best friend/bodyguard, Lothar, trapped on the island nation of Cockaigne, after a mishap at a stageshow leaves the new government suspicious of

Mandrake’s presence in the country.  Mandrake, of course, is entirely innocent, but once his motives are questioned, he starts to dig deeper into the growing conspiracy– and finds the mysterious Princess Narda, who was supposedly killed in the military coup that took over her country.   Soon, he discovers that this plot involves real magic, and Mandrake’s

own powers begin to awaken. Mandrake is by Christian Bale, Lothar is Chiwetel Ejiofor of 12 Years a Slave, and Zoe Saldana of Star Trek plays Princess Narda.

Okay, I’ve got to be honest: Mark Trail is how this entire thing started.  I’ve wanted to see a Mark Trail movie forever!  Think about it: Mark Trail as a wild slapstick action comedy, complete with zany scenes chock full of wildlife facts?  It would be a super summer blockbuster family film!  Plus, Jon Hamm’s comedy chops generally get overlooked in

favor of his dramatic performances on Mad Men, and face it: the man is Mark Trail’s doppelganger.  I’d pick Amy Adams to play his romantic interest, Cherry Davis, and of course, we need an evil poacher!  How about Will Ferrell?

Ahhh, Mary Worth, everybody’s favorite busybody!  Envision this one as a feel-good comedy about Mary, played by Betty White (who else could possibly play Mary?) as she attempts to help her neighbor’s daughter, Dawn, find happiness.  Dawn isn’t having any of it, of course, and wishes this nosy old lady would stay out of her life– until her dad, Wilbur’s,

advice column brings them together.  Abigail Breslin stars as Dawn.

You really can never get too many fantasy films, in my opinion, and it’s been a while since we’ve had a great Arthurian romance.  I’d love to see Prince Valiant start at the beginning, with Val as a young man.  It would be amazing to try to recreate Hal Foster’s

lush art for the silver screen.  I’d nominate Joseph Gordon-Levitt to play Prince Valiant (check out that hair in Lincoln.  Perfect!) and, hey, as long as this is all wishful thinking, Jennifer Lawrence of Hunger Games fame would make a great Aleta– a phenomenal actress who’s also proved she can play an action heroine.

Like Prince Valiant, I’d love to see good old Rex Morgan rewound to his first days in Glenwood– a big city doctor suddenly finding himself in a small down and trying to learn to adjust, while dealing with all kinds of medical woes he

never had to encounter in his previous career.  His move also introduces him to Nurse June Gale: and the two are skeptical of each other at first, but have to learn to work together– and maybe fall in love!  I think it would make a pretty sweet romantic-comedy-slash-medical drama, and my choices for casting are Paul Rudd as Rex and Anna Faris as June– both great romantic comedy leads!

That’s all from me!  Tell me your dream casts for Comics Kingdom movies!  Who knows, maybe some producer is reading RIGHT NOW!!??