Ask A Cartoonist: Tool of the Trade

If you ask a dozen cartoonists to describe the methods they use to write and draw their comics, you’ll wind up with…well, a dozen different descriptions.  As somebody who loves to write and draw, myself, I love hearing about how the pros do it– it’s how I discovered my favorite pen nib, my favorite brand of marker, and my favorite writing software.

So, this week, I asked our cartoonists to share their favorite, most essential tools for writing or drawing! 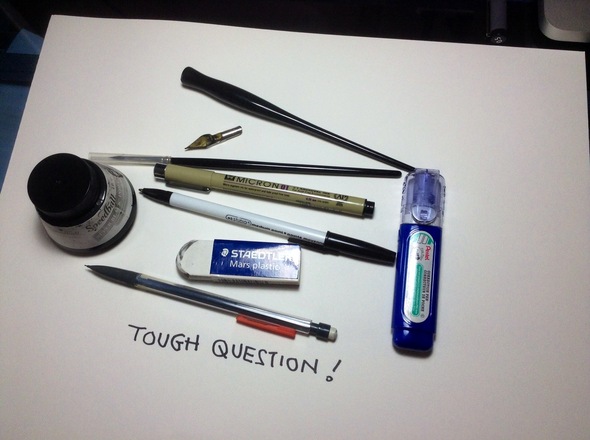 I guess I’d have to say that the one tool I find essential for writing and drawing is a pen, or brush. Without a pen you can’t do much— except maybe draw with your fingers (as on an tablet screen). But then paper is important, too… unless you have a 3-D pen that draws in air, which I will soon have. Maybe my soon-to-arrive magical 3-D pen will become my most essential tool, who knows? This is a tough question! –Rina Piccolo, Tina’s Groove & Six Chix

The one essential writing and drawing tool I’ve been using since I was 3 or 4 years of age, and continue to use, is an HB pencil.

The tools essential to the syndication of ‘Pros & Cons’ are relatively recent developments. The home computer, a scanner, the Internet, the WorldWide Web and software programmes like Photoshop, InDesign and Acrobat. All these things used to scare the hell out of me. I was convinced this wave of technology would make the HB pencil based skills I’d spent my whole life developing redundant. In reality, technology enabled me to produce, deliver and make my work available to a far wider audience –Kieran Meehan, Pros & Cons

The tool I cannot live without is a radio to listen to politicians, because they are hilarious, and very inspiring for cartoonists. –Isabella Bannerman, Six Chix 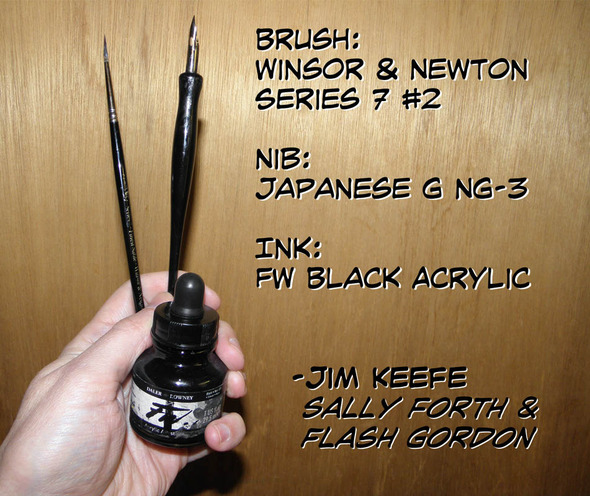 For inking it’s a Winsor & Newton series 7 brush (sizes vary). You can see more of my tools in this linked blog post. –Jim Keefe, Sally Forth & Flash Gordon

For writing, the one tool I value is the internet. I use it to scan articles, websites, anything that might inspire me. I also read books and magazines, but the internet has a larger well to draw from, so to speak. I’m on it so much, my pupils are basically pinwheels at this point. –Terri Libenson, The Pajama Diaries

Besides pencils, pens, brushes and ink, the one tool I couldn’t live without when creating comics is my light table. My wife, Karen, gave me one for Christmas in the mid-1990’s. It is not large at all, measuring only about 11″ x 18″, which is nice because it does not take up much space in the studio. Plus, because of it’s small size, it’s portable and easy to take on trips. About a month ago, after many, many years of bodacious service, this light table died! Luckily, I was able to find a new one just like it on amazon, ordered it and had it the next day! –John Rose, Barney Google & Snuffy Smith

I love to listen to podcasts as I ink. Tom Racine’s interviews with cartoonists, This American Life, Radiolab and BBC Radio 4’s Friday Night Comedy are my favourites and when I’m being good, I attempt to improve my Spanish with News in Slow Spanish. –Alex Hallatt, Arctic Circle

Aside from several cups of strong coffee, a Hunt’s 100 nib. It’s almost as flexible as Zippy’s frontal lobes. –Bill Griffith, Zippy the Pinhead

The lowly pencil dominates the Tool Throne. Everything starts with the pencil jotting down an idea. Then the best ideas are selected from those jottings and transformed into a sketch. When one of those sketches is selected to be used, a finished drawings is made by our pencil on heavy drawing paper and is ready for inking. But it’s success all depends on the quality of the pencil’s drawing. Hail to the revered pencil! — Mort Walker, the lowly pencil pusher of Beetle Bailey

The one essential tool for creating my cartoons is comfortable seating. A good couch that I can sink into. I find that being in a relaxed position is the best way for me to be creative and get inspiration for my editorial cartoons. So I will slouch into the couch with my feet up on whatever is closest, coffee table, ottoman, you name it. When I would do this at one of the newspapers I worked at, passersby assumed I was goofing off. But I had to explain to them that this was actually me at my most productive! –Jimmy Margulies, Editorial Cartoonist 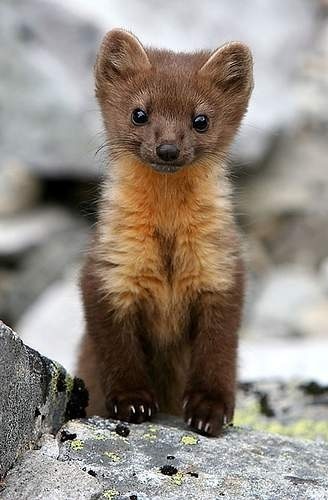 This little fella has made my professional life possible. He’s a Kolinsky red sable, a weasel really, who leads a spartan lifestyle in the Siberian wild. Ain’t he a cutie?

The Kolinsky’s tail hairs are uniquely supple and strong, and when expertly fashioned in the talented hands of the women on the lines of the Winsor & Newton factory in England, conspire to form the dreamy Series 7 Number 3 red sable brush.

It’s the brush I’ve used to draw virtually every line in my forty-year career as an editorial and comic strip cartoonist. If you care for it lovingly those critical hairs at the point will last three or four months in peak form before losing a bit of their spring and a couple miles an hour off their fastball and being relegated to a spot in the bullpen. — Jim Borgman, Zits