This week, based on the results from our Vintage Expansion survey, we starting running the beloved vintage strip Johnny Hazard Dailies and Sundays. Here is The Archivist’s take on this vintage treasure!

And don’t forget to stay tuned for next week, when we will debut vintage strips of Redeye!

It will soon be seventy years since the start of a great adventure strip, “Johnny Hazard” by Frank Robbins. It premiered at a key moment during World War Two — the day that the Allies captured Rome and the day before D-Day. 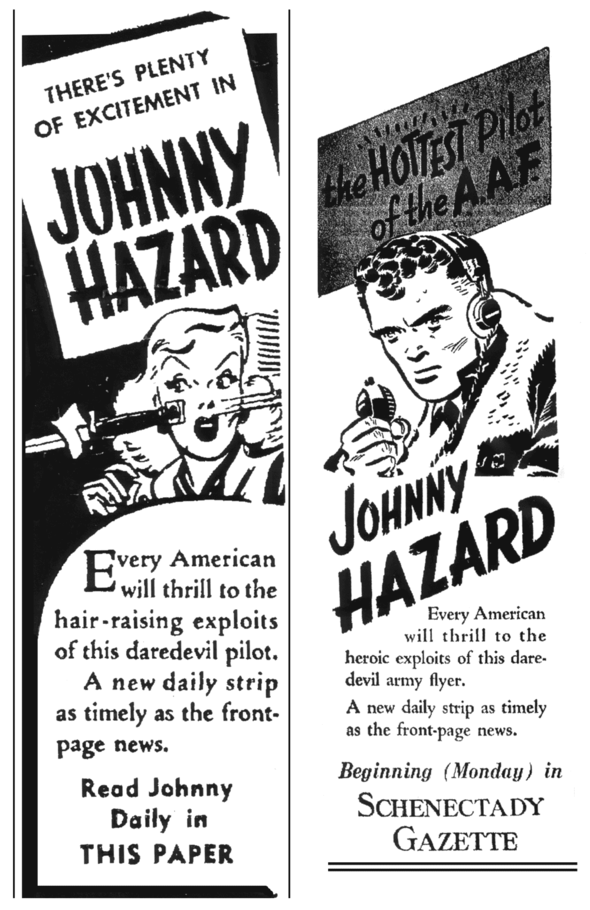 Robbins was formerly the man on “Scorchy Smith,” the small Associated Press Syndicate’s aviation adventure series. The genre was already extensive: “Smilin Jack,” “Terry and the Pirates,” “Barney Baxter,” “Skyroads,” “Tailspin Tommy,” etc. Johnny was an Allied pilot, fighting Germans over Europe. After the war, he would fly missions and get into spy Intrigues in the Far East and more. Robbins would occasionally do science fiction, like when he crashed in a valley inhabited by dinosaurs, or really strange tales, such as a pirate band living in a string of long-abandoned ships sitting in the Sargasso Sea.

Over the years, Johnny went pretty much everywhere: from fighting Red Chinese submarines, searching for Bigfoot in the Himalayas, thwarting thieves who would steal the English crown jewels, or rescuing kidnapped rock and roll stars. Johnny outlasted most of his contemporaries, lasting 33 years, ending in 1977.  You can now enjoy reading Johnny’s stories on Comics Kingdom, so look in for some entertaining reading.

I thought Tumbleweeds was also a great strip, and though we handled it for many years, alas, it was another property we didn’t own. It belongs to it’s creator, the great Tom K. Ryan.

We already have something like that, check out our “Ask A Cartoonist” blog series.

Joe Palooka was never a Hearst property, nor did we syndicate it. Longtime New York  area readers may recall Joe appearing on the cover of the Sunday Mirror’s comic section for many years, but it was distributed by the McNaught syndicate.

We appreciate all the suggestions of strips to add to our vintage line-up. We are always  expanding our vintage selection, so check back often for more vintage expansion plans!

Yours truly,
The Archivist