Even been curious about the places where cartoonists work?  So was Alex Hallatt of Arctic Circle.  She suggested a great question for this week’s “Ask a Cartoonist:” show us your workspace!

Here’s a couple of pictures of my studio, though. It’s in the attic of my house, which was built in 1930. It’s pretty nice. Which is why I hardly ever leave. My drawing table is really big and old, dating, I suspect, to the early 1900s. I bought it at this auction house I used to live near in Chicago. That’s where I got the the jackalope on the back wall as well. But my shelves are from Ikea.  –Terry LaBan, Edge City 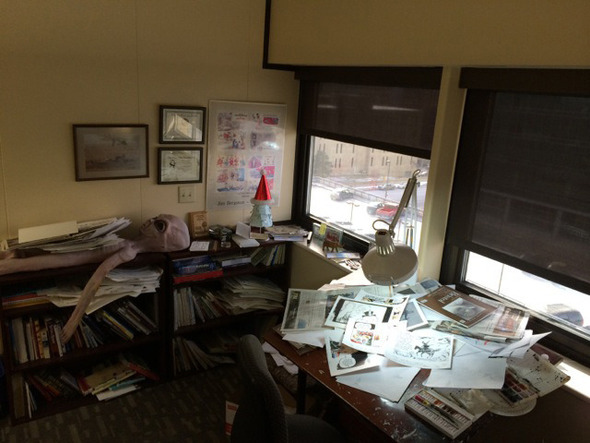 Here’s my office with a blog post about the alien!  –Jeff Koterba, Editorial Cartoonist

Here is my workspace. There is a sofa for brainstorming and a table next to the window for drawing. Being an old house (1720), there are a lot of draughts, so I have bubble-wrapped the window to keep them out, but let in the light. The lightbox/slanted drawing table is homemade and clunky, but works!

The other angle shows my computer set up – a mac with antique Wacom graphics tablet and a extra monitor for when I’m working on a lot of cartoons.

And I love maps. 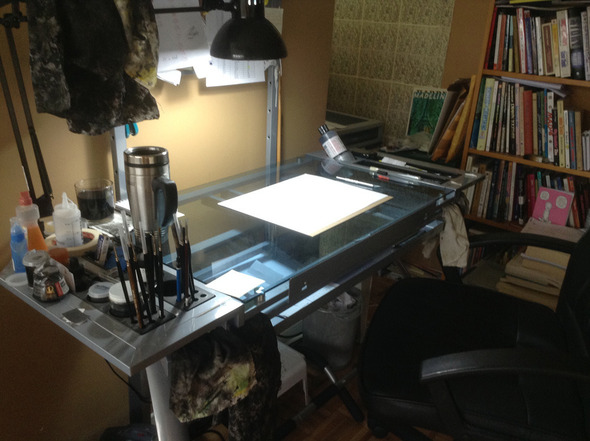 Here’s the photo of my desk. Not too impressive, lots of filthy ink rags, but I get work done!  –Rina Piccolo, Tina’s Groove and Six Chix

I do most of my penciling and writing from the cozy corner of my living room couch.
While there, I am either listening to Spotify or Pandora.  I will sometimes take a break from the music to watch “The Price is Right”.  I can ink from this spot too but most of the time I move to the dining room table for the inking process.

Then it is off the the basement where I set-up shop between our christmas/halloween decorations and the washer and dryer (I know, pretty sweet  right?)  This is where the large scanner is located.  After the scanning I usually head back up to the dining room to do all of the finishing touches on the laptop. — Bill Bettwy, Take it From the Tinkersons 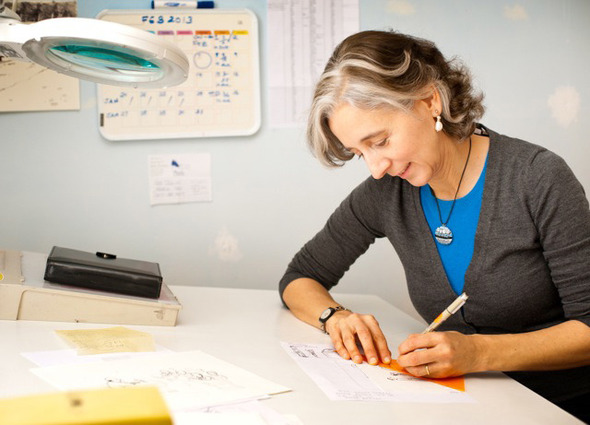 Here are some words about my studio.

It faces west, so if I want to use my light box in the afternoon, I have to pull down a heavy blind to block the sunshine. I use that magnifier light you can see in the corner – a lot! In my hands are a Micron pen and a see through orange triangle for drawing the borders around the comic. –Isabella Bannerman, Six Chix  (Photograph Credit to: John Maggiotto of Dobbs Ferry, NY.)

My studio is multi-functional. I’m also a painter, so the space on the right side of the fireplace is devoted to that. The drawing board I use for comic strips is on the left.  The couch in the middle is what I use for um, thinking.  — Jerry Scott, Baby Blues and Zits 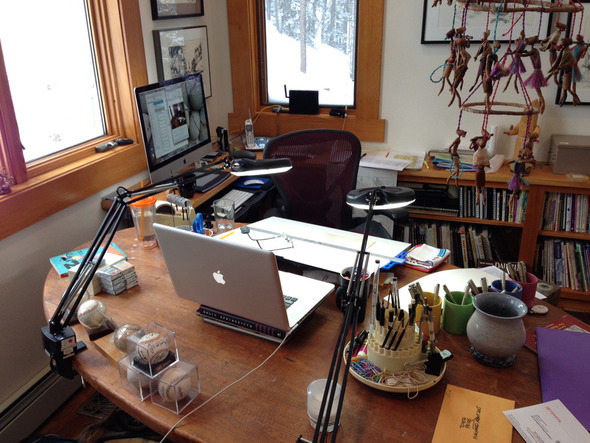 Here’s a shot of my studio this snowy Colorado morning.  –Jim Borgman, Zits 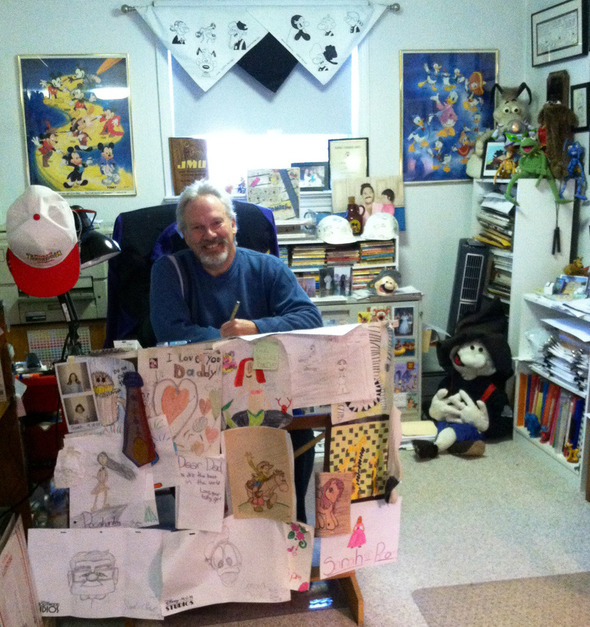 My most favorite things about my drawing table are the drawings that are attached to it, hanging all over the front of the table.  Our daughters, Meredith and Sarah are both college-aged now, but they did these drawings for me when they were very young.  And they’ve hung on my drawing table ever since.  I treasure them. –John Rose, Barney Google and Snuffy Smith

–Marcus Hamilton, Dennis The Menace (Click to enlarge and read all the goodies!) 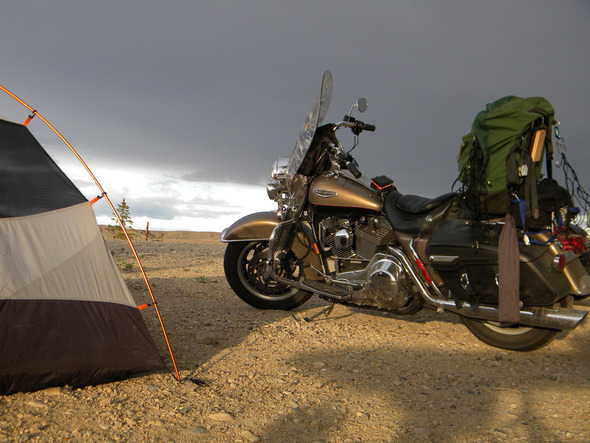 I was out on the road for 83 days this summer, about 11,200 miles. I wrote the Phantom from wherever I happened to be. Ended up in Alaska for a while.

This was Wyoming.  –Tony DePaul, The Phantom

–Hilary Price, Rhymes With Orange (click to enlarge and see all the goodies) 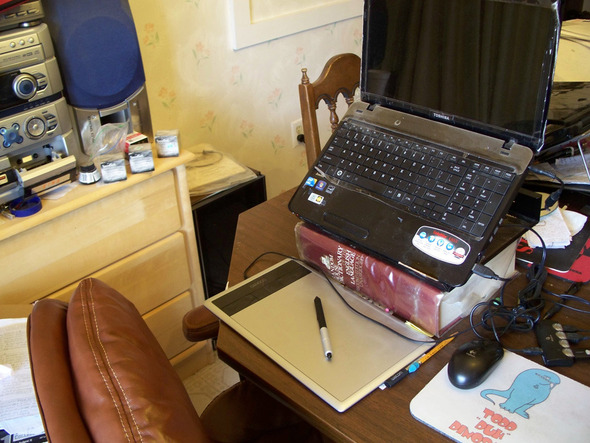 Here’s a shot of my workspace.  It’s actually a commandeered end of the kitchen table. –Patrick Roberts, Todd the Dinosaur 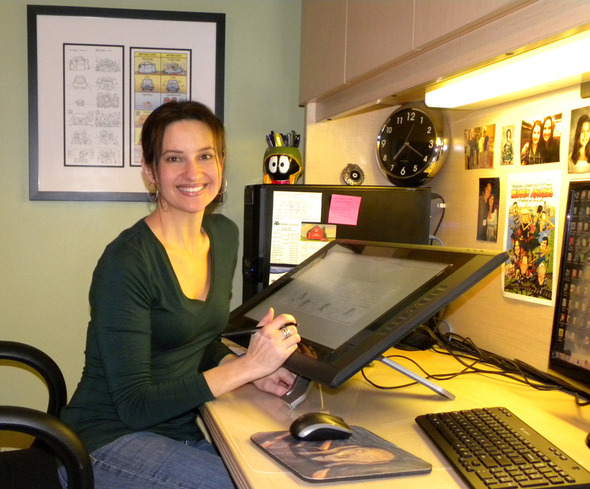 Here’s me in my home office with the love of my life, my Cintiq 🙂 –Terri Libenson, The Pajama Diaries 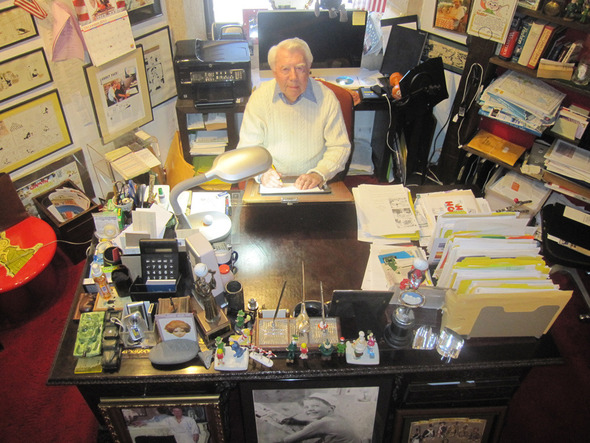 Do you have any questions you’d like to ask the King Features cartoonists?  We’d love to try to answer them!