I hope you all had a great New Year!  I took a few days off and spent some time with my family in New England.

Last weekend, we drove to Orange, Connecticut, to visit the Pez Visitor Center,  which houses a museum and a viewing area where you can actually see Pez candy being made. 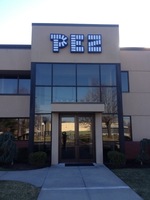 I’ve been collecting Pez dispensers since I was a kid, and I’ve always wanted to go there, but what made this trip especially exciting was that I got to see some King Features characters up close and personal– and it was a total surprise for me!

There is a display case at the Visitor Center where the museum houses special “custom” dispensers with original artwork hand-drawn by a number of cartoonists, illustrators, and other artists.  Our very own Mort Walker had a Beetle Bailey Pez dispenser on display, along with a Sarge dispenser by Bill Janocha of the Beetle team.  Aww, look at those smiling faces! 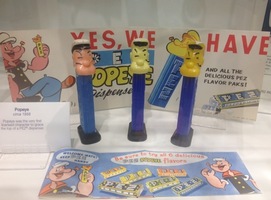 But I think the most interesting thing for me was learning about the very special history of Popeye at Pez.  Pez began making dispensers in the 1940s, and they were originally very plain and stylish– intended for adults who were trying to quit smoking.  Throughout the 1950s, Pez introduced a number of more playful designs intended for children.  In 1958, Pez introduced the very first Pez dispenser featuring a popular licensed character– and guess who it was?  Yep, our beloved spinach-chomping sailor man was the FIRST famous character to get his face on a Pez dispenser.  Look at that!  They even had an entire ad campaign about it!

Which leaves me wondering whether they ever made spinach-flavored Pez!

Before I sign off for the week, I just want to remind everybody that TOMORROW is Flash Gordon’s 80th anniversary! Wow.  That’s eighty amazing years of swashbuckling in space…seems like only yesterday they were taking off in Zarkov’s rocket, huh?  Go celebrate by re-reading last weeks “Ask the Archivist”  Or by, you know, conquering a galaxy. Both are equally acceptable!