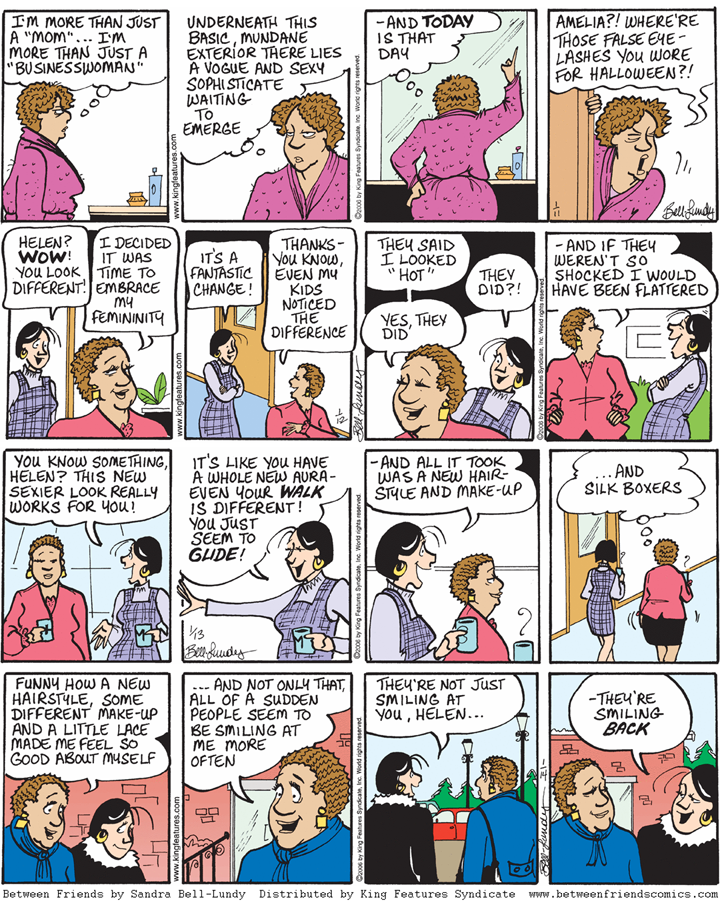 People sometimes ask “who” my Between Friends characters “are”.  There isn’t really any definitive answer to that.  When I originally created the strip, I had five women characters who were modeled on good friends of mine as well as myself.  I was advised early on to take those five characters down to three…and to “really develop” the personalities of those three.  The editor said five characters were too many for a reader to get to know all at once.

So I took the three strongest, most developed characters and based my comic on Susan, Maeve and Laura.  (Laura morphed into Kim…but that’s a whole other story)  There were some traits of the dropped characters that I liked though…and so I molded these bits and pieces into the chosen three.

The point is that the characters were influenced by real people but they aren’t a mirror reflection of those people.  And in addition to that, I would say there’s also a little bit of me in each of my three women. I admit that I identify most strongly with Susan.

That’s who my comic strip characters are. Confusing enough?

The other thing about these characters is that they’ve become individuals in their own right over the years.  When I write a strip, the outcome of the situation or the punchline ultimately depends on which character is being featured. There are things Maeve would say that Kim wouldn’t.  There are ways Kim would react in certain situations where Susan would do the complete opposite. I write according to who the characters are…not according to what I want to say.  (Although I guess I could flip that and say if I wanted to make a particular point, I would give my voice to the character it best fit in the situation.)

This week’s comics are about Susan wanting to make a change in herself…something she frequently wants to do but somehow never seems to follow through.  She wouldn’t be Susan if she did.

Helen (Maeve’s assistant at the office) is a completely different type of character. She’s more sure of herself, she’s no-nonsense and she’s the type of person who gets things done.  Below is a series from 2006 where she decides she wants to make a change.  And she does.  Because she’s Helen.