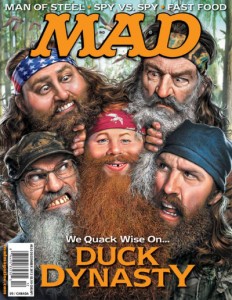 As someone who grew up reading MAD Magazine, I was thrilled when I saw this issue recently!

As a kid reading MAD, I never thought that a cartoon character I drew would ever be parodied in the hilarious pages of the iconic magazine. But, imagine my surprise when I was reading this double-page spread on Duck Dynasty, bodaciously illustrated by MAD artist Tom Bunk… 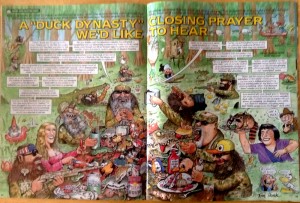 Right in the upper center of the page, on water skis, being pulled by a frog through the swamp, I saw my pal Snuffy Smith! See enlarged image below: 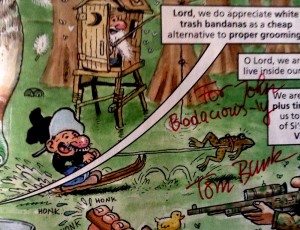 How cool is that?! Not only to have Snuffy in the marvelous pages of MAD Magazine, which I have so long admired, but to also have him featured alongside my pals from Duck Dynasty!

Although I was familiar with his work from MAD Magazine, I did not actually know the wonderfully talented Tom Bunk. Tom has been with MAD’s “usual gang of idiots” (as they are commonly referred to) since the early 1990’s.  I wanted to thank Tom, but did not know how to get in touch with him. So I contacted my friend, the amazing MAD artist/caricaturist and President of the National Cartoonist Society, Tom Richmond, who kindly put me in touch with Tom Bunk. Tom B. was gracious enough to send me an autographed copy of the magazine which I will forever treasure.

Snuffy going MAD sure made me HAPPY!