ASK THE ARCHIVIST: THE DREAMS OF WINSOR McCAY

Our founder, William Randolph Hearst, had a great eye for talent when it came to cartoonists of his era, and he would always pay handsomely to acquire and keep the services of  the best.

Unquestionably one of that number was Winsor McCay (1869-1934), forever to be remembered for Little Nemo In Slumberland, the foremost fantasy/science fiction strip of comics’ first decade. McCay was one of those geniuses of pen and ink, like Hal Foster and Alex Raymond who followed him, who could create well-thought out, highly intricate tableaus and deliver them every week.

He created Nemo for The New York Herald’s syndicate, and it ran there from 1905 to 1911. It was easily the star attraction of their offerings, inspiring some licensing, which included  an extremely early animated cartoon in 1911.  That was the year McCay’s fortunes rose with a move over to The Hearst Corporation. As always happened in those days when a cartoonist went to a new syndicate, he could bring the characters he created, but not the trade mark. That is, the name stayed behind, so The Newlyweds and Their Baby became  Their Only Child, The Katzenjammer Kids became Hans And Fritz, and Little Nemo In Slumberland became In The Land Of Wonderful Dreams.

He also contributed a number of situation comedy daily strips, with titles like The Faithful Employee, Mr. Bosh!, Everybody’s Got an Ax To Grind, and The Man From  Montclair (who became “The Man from Evanston” in the Chicago Examiner) But still most highly regarded work was McCay’s fantasy series. He always used the framing device of a dream to rationally explain why irrational things went on, and in addition to Nemo, there was a famous earlier daily series he’d done for the Herald called The Dream Of A Rarebit Fiend. He revived this format with new titles, usually a variant of “The Dream Of A Lobster Fiend.” Evidently McCay’s source of inspiration was overly rich food. 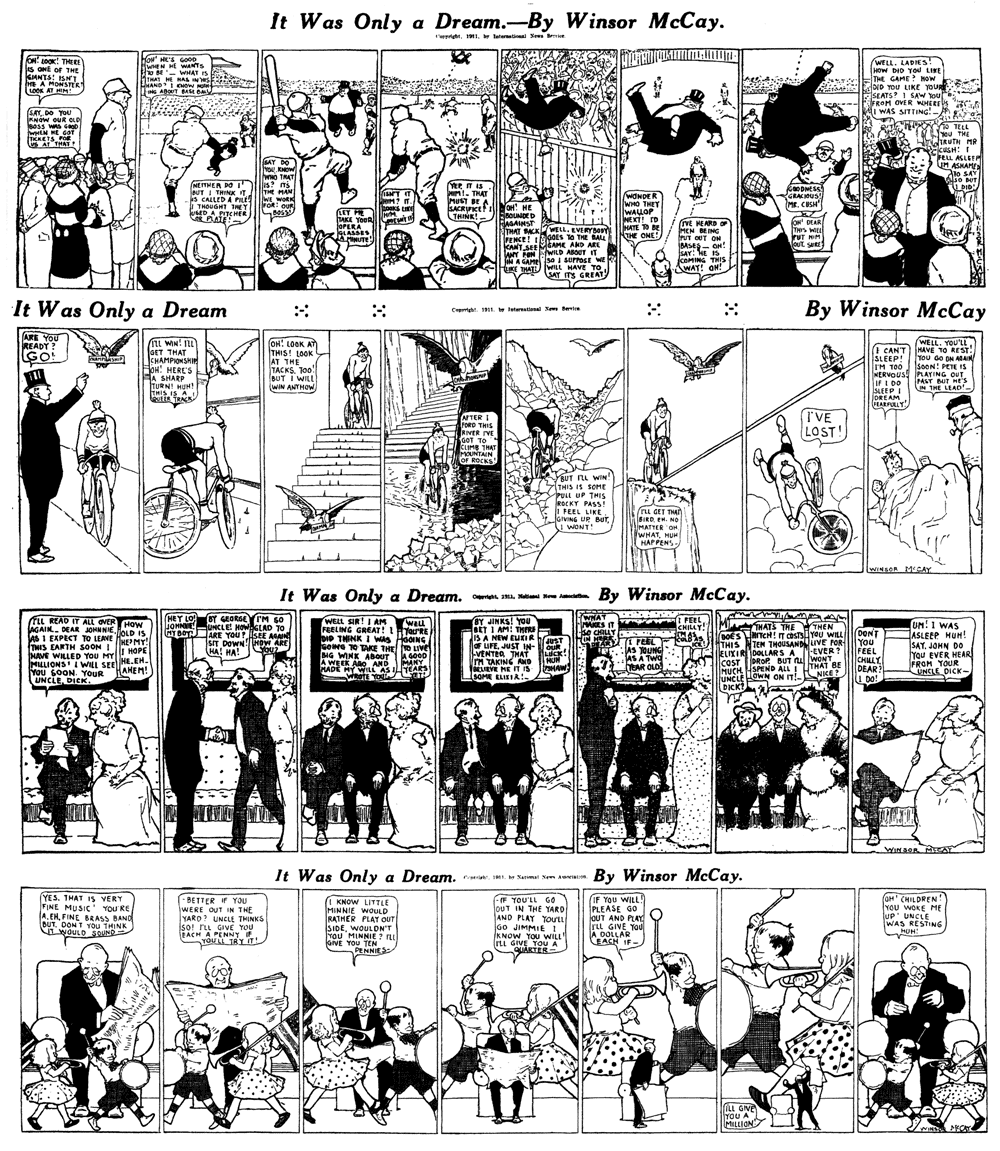 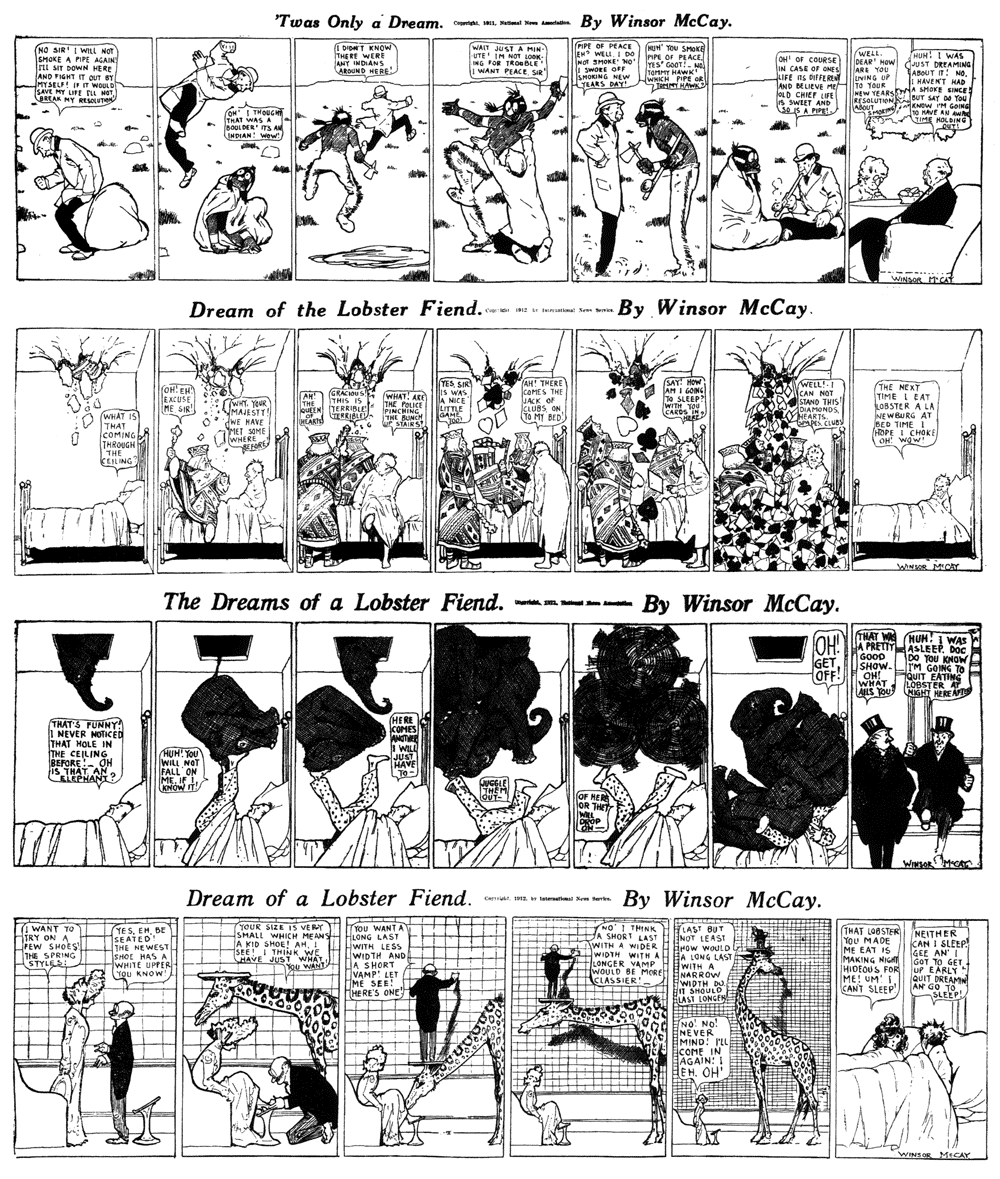 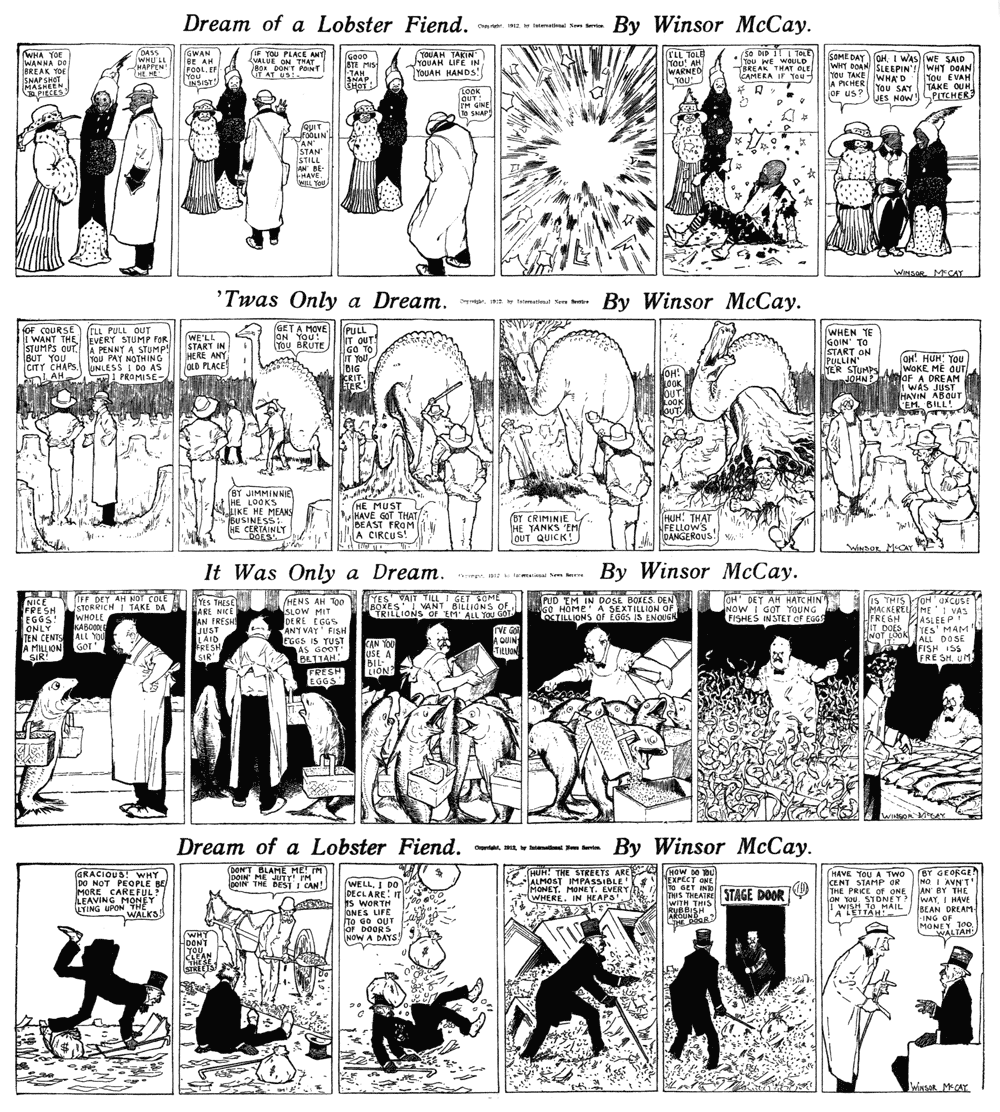 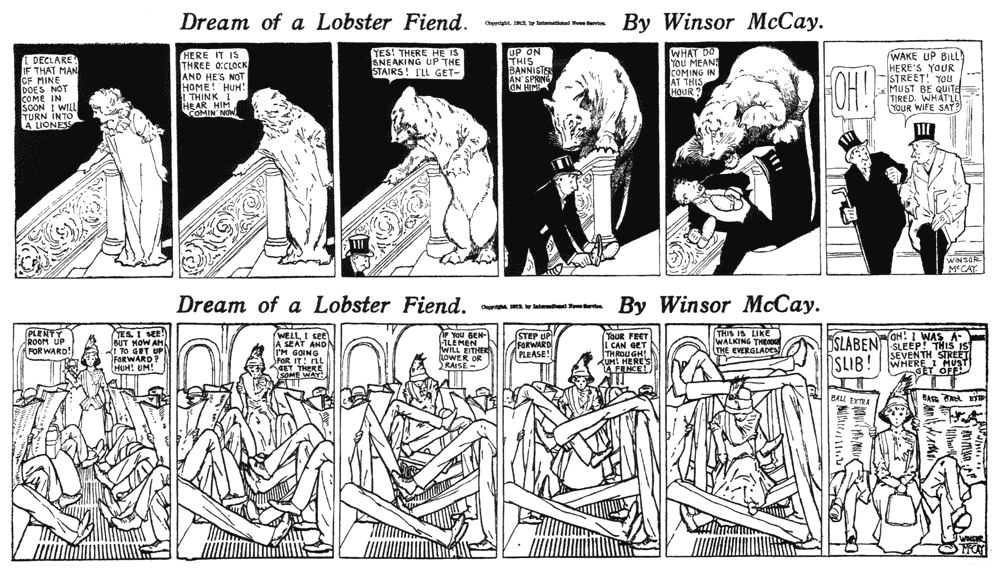 Some of Winsor McCay’s daily nightmares from October 1911 to May 1912.

By 1914, McCay had stopped doing comics altogether and only contributed editorial work for the Hearst opinion pages, and a large, often half-page effort for the Sunday edition that could take on elaborate fantasy elements.

I know the Newspaper Feature Service and King Features syndicate designations are a century old,  or nearly so,  but I guessed that as a topic, it would be on the moldy minutiae side, of interest only to us comics super fans. However, in two years we will celebrate our corporate name’s origin, and the man who was responsible (after Mr. Hearst, of course), Moses Konigsburg.

Glad to run some of the old Barnes episodes ofThe Better Half past you. Maybe if I can think of an excuse, I’ll show off some of his Sundays too. They were basically five one-panel gags instead of one, with the center cartoon in a circle instead of a square.

The Charleston Gazette might have done just that, the feeling that it was a more adult series than say, the Register & Tribune’s other daily gag panel, The Family Circus, was talked about when I was a kid. There were other papers that put it among the want ads, but most papers included it with the rest of the comics with no problem, for instance, The Philadelphia Evening Bulletin always had both panels on the back page for years.