It’s been 50 years this week since the tragic day when John F. Kennedy was assassinated in Dallas. Those of us old enough to remember those dark hours and days will never forget how that felt. Perhaps I can liken it somewhat to the same dread as on 9/11. There weren’t many bright moments that day. All television stations dropped their scheduled programs and devoted all their time to coverage of the event, the capture of Oswald, the eulogy, the death of the assassin, and the state funeral and burial of JFK at Arlington Cemetery. A numbing, exhausting weekend. But newspapers still had to get published, and although one would probably have had little interest then in the frivolity of the comic pages, they went along as usual, oblivious to the grim events in the real world.

So today, to commemorate that day, I will show some of the King Features strips and panels that ran that Friday. Half a century makes quite a difference—most of these titles ran for decades, but are long gone now. You can click the images below to enlarge them. 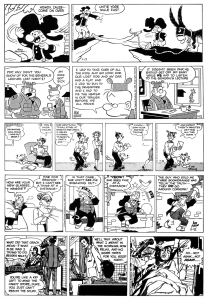 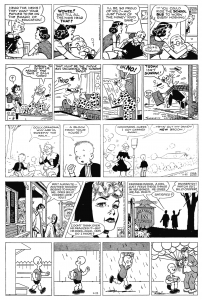 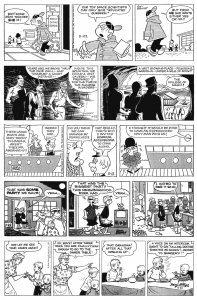 PONYTAIL by Lee Holley, SALLY’S SALLIES by R. J. Scott, THEY’LL DO IT EVERY TIME by Jimmy Hatlo, TRUDY by Jerry Marcus.

To Tim Fisher:
Segar was a dedicated cartoonist of high output, and his career lasted about twenty five years. He wasn’t always ill, and in earlier years spent a lot of leisure time pursuing outdoor sports like hunting and fishing.

To MR. WHOOPEE:
I will do some things with Segar and the other cartoonists of the J. Keeley Syndicate soon, after all when Hearst bought the Chicago Herald, the syndicate came with it.