ASK THE ARCHIVIST: THE LOOK OF MANDRAKE

MANDRAKE THE MAGICIAN is and has been a man of many mysteries, and over the years one of them has been the look of Mandrake himself.

First of all, could Mandrake actually be based on a real man?  Surprisingly, the answer is not only yes, but in fact, he is based on several real men. Mandrake’s creator, Lee Falk, was often asked about this, primarily because of the famed stage magician, Leon Mandrake (1911-1993).

Born Leon Giglio in Washington State, he started his career early, as a teenager. His talents included ventriloquism, mind reading and even fire eating. He toured mainly in the U.S. and Canada for many years. Some sources say he had been on the stage ten years before the strip was created. Both Lee Falk and Phil Davis knew him, at least after the strip was created. So was it intentional? I see that Leon Mandrake’s first wife was named Narda. Yet some articles from the 1960′s state Falk intended Mandrake to resemble himself.

Being an inquisitive sort, I asked Lee about this once. I believed if anyone were, at least physically, an inspiration for Mandrake, it might be the film actor Warren William (1894-1948). William had a great, deep precise voice, always playing smart, slightly villainous or raffish characters. He is probably most remembered for assaying the roles of Perry Mason and The Lone Wolf. Falk I think, preferred to play it cagey and offered me some other actors like Fredric March or Fred MacMurray. I suppose that maybe Warren William’s fame had waned to obscurity, and maybe a better known name might keep Mandrake fresher. Anyway, to others he did say William was, at least many years ago, a model for the great magician. 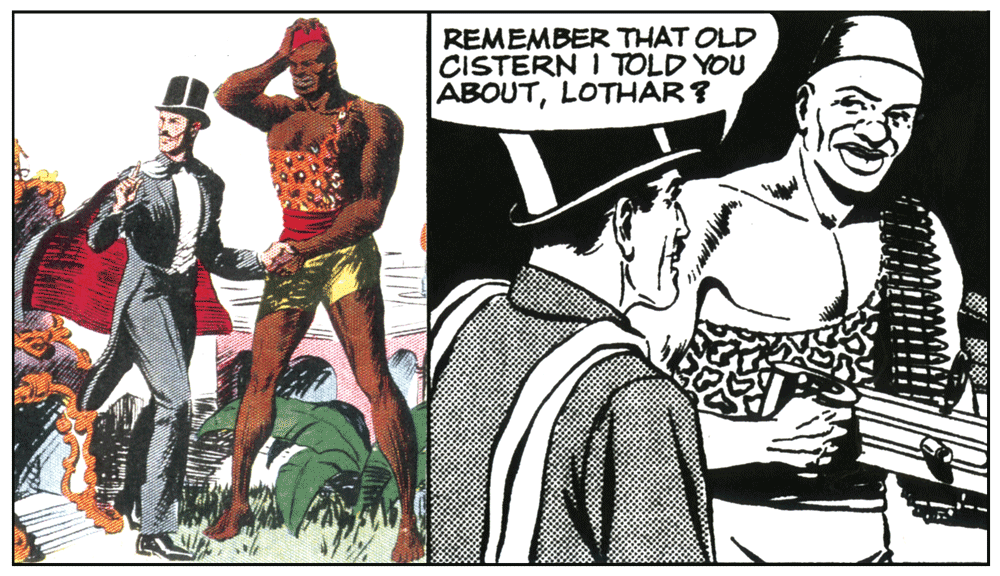 While Mandrake has remained fairly consistent, Lothar has gone through several changes. When the strip began in 1934, even though he was the strongest man on Earth, he was uneducated, and often, he alternately played comic relief or punched/destroyed his way through adventures. His costume was an odd one: a fez, a leopard skin shirt one might expect on a circus strongman or a caveman, swim trunks, and a red cummerbund like a bare-knuckle-era prize fighter. 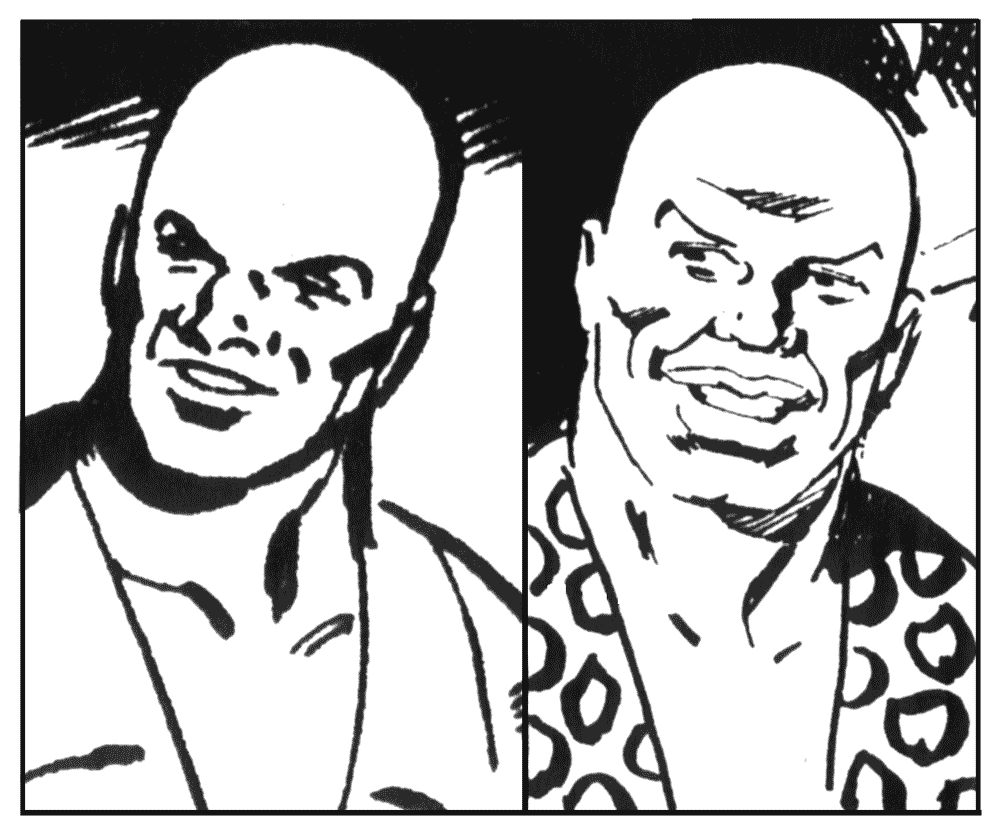 In the beginning of the series, Lothar spoke the same as everyone else, but right away, he developed a pidgin patois loaded with colorful malaprops like “Topsy-Turtle” for Topsy-Turvy, or “Boneheads” for skulls. By the mid-1950s, he went back to speaking standard English.

Lee became sensitive to the changing attitude toward black characters, and in 1969, Lothar’s costume was changed to an open-necked sport shirt  and long trousers.  Lee asked Fred Fredericks (who took over the drawing chores in 1965) to give him more politically correct looks. But it became too severe, and all racial distinctions were gone, leaving Lothar looking like a young Mr. Clean.  Lee decided it was a bad idea, and his old looks were restored. In the end, it was an unnecessary experiment because neither Falk nor Fredericks ever received a single letter of disapproval anyway.

I’m impressed by our reader response to the Mandrake-themed “Ask the Archivist” from last week. The great magician has many dedicated fans.

The Titan series of books will be very interesting, but I’m afraid I don’t have a set either. About forty years ago, another publisher put out a great set of art-book treatments of rare early Mandrake, an outfit known as “Futuropolis.” They are beautiful tomes, and would have been perfect except for the unfortunate retranslating of the word balloons into French.

The Mandrake strip Mr. Kennedy refers to as being so memorable is a daily showing Mandrake trailing two thieves in a warehouse, invisibly, because they are under his hypnotic spell. Suddenly he’s stopped by the watchman, who can see him because he wasn’t under Mandrake’s influence.  I’m sure Lee would have been pleased and flattered that such a minor bit of story impressed itself on you that much. Memory is an odd thing, especially those of our earliest years.

Mr. Potrzebie has a pretty standard account of Mandrake and where the name changed, but I would take it with a pinch of salt, it seems to me there’s always a bit of hyperbole involved from Lee, which of course is essential in promoting one’s creations.

I don’t know of a Mandrake candy license, but that doesn’t mean there wasn’t one. He’s been on a few things over the years, toys and trinkets like plastic charm bracelets, and yo-yos, and kid’s puzzles. I guess the most  popular item was a small magic kit made from the late 1940’s and 1950’s.