Today, I am starting a mini-series on Mandrake, the classic character created by Lee Falk, who would bring so many memorable science fiction and crime-fighting tales to the comics page in its long, long run.

When MANDRAKE THE MAGICIAN first saw the light of day in 1934, the world of action/adventure story strips was still a relatively new one. They were mostly cops-and-robbers sagas, like DICK TRACY and DAN DUNN. With his love of theatre and great literature, Falk wanted to do a crime-fighting series with a new twist and he added the element of magic. Falk’s concept involved a mysterious man who could counter the bad guys with supernatural force and bizarre methods guaranteed to shock and amaze readers. Let’s look at his first story, The Cobra (June – November 1934).

Mandrake, at first, is seen as a fantastic, unearthly man of magic who makes people into objects or animals of his choosing. He comes on the scene of a theft of highly sensitive diplomatic papers that were in the hands (or taken out of the hands of) an ambassador.

With him is Lothar, nearly unrecognizable at first, especially with the blazing, wild-eyed zombie stare. Mandrake is dressed in a traditional magician’s evening clothes of top hat and cape, implying he might be a member of high society. Clearly, he is a sophisticated, highly cultured gentleman. He is definitely a man of mystery because it would be a long time before Falk gave him an origin story. We don’t even know what his nationality is, though we will assume here that he is American until we’re told different. 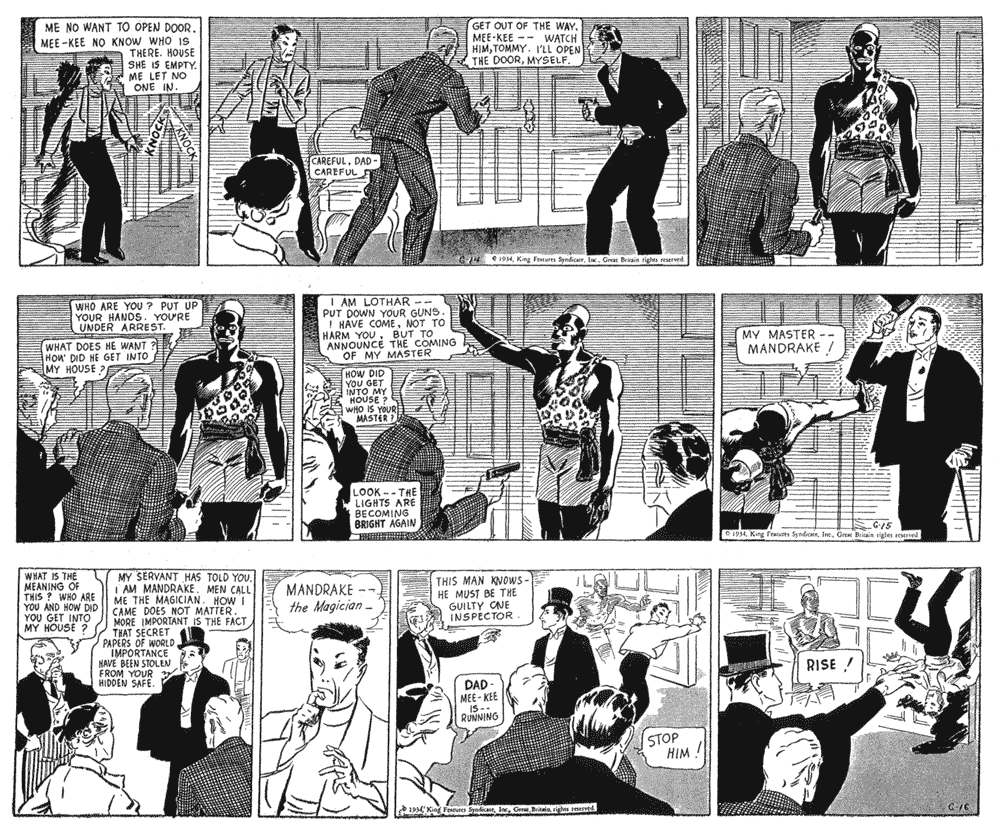 The first time Lothar, Mandrake and a magic act are seen in MANDRAKE THE MAGICIAN.

In the first story, we also meet Mandrake’s arch-nemesis, the equally mysterious Cobra who also oozes mystique yet lacks Mandrake’s sartorial élan. Cobra is the one who heisted the all-too-dangerous, secret diplomatic papers. A war might break out if they fall into the wrong hands. “What could these papers possibly say?,” I shudder to think.

Mandrake instructs Secret Service Inspector, Ralph Sheldon, his daughter, Barbara, and young assistant, Tommy Lord, to travel by ocean liner thirty days eastward until they get to “Tejei,” where they will be on Cobra’s trail.

Onboard, several attempts by the Cobra’s men prove no match for Mandrake’s ingenious hocus pocus. He and Lothar had been aboard all along by manipulation of shadows, rendering them invisible until they wish to reveal themselves. I’ll bet Mandrake and Lothar get into the movies free a lot.

Mandrake really knows how to make an entrance.

When they get to the weird land of Tejei, the Cobra puts things like a termite plague on them, which Mandrake counters by summoning the aid of a high priest of sun who has been dead seven thousand years.

At their hotel, three of Cobra’s henchmen attempt yet another futile assault on the intrepid party, and again seek out the girl as their first target. The cowards! They are captured and made to spill the beans as to where the Cobra’s lair might be, and one finally cracks with the right illusions to persuade him.

Lothar never was a man to trifle with.

In 1934, it isn’t clear whether Mandrake is using hypnotic mind control or if he has actually metamorphosed the object or being.

When they finally get into the Cobra’s hideout, he proposes a partnership with Mandrake to rule the world. Mandrake temporarily pretends to go along with this, while Cobra reveals his nefarious methods which includes how he can manipulate international leaders through a mix of astral projection and hypnotism abuse.

The “Council of Nations” alludes to the real life League of Nations, which might have benefited from the Cobra’s help.

Additional bizarre goings on at chez Cobra include: reducing men to “blank-faced” slaves by erasing their faces and operating a fantastic mine in the cellar, where diamonds are ground to a dust component from his poison gas and death ray.

Inside the secret laboratory and some of the “Blank Faced Men” that Cobra has temporarily enslaved.

Cobra finally loses his hold on the good guys when sunlight comes through to Mandrake, which breaks a “Spell of Darkness” holding Mandrake’s powers in check.

After one last escape from a snake pit of cobras (naturally) that Tommy and Lothar faced until Mandrake turned the nasty reptiles into kindling wood, the evil wizard himself is finally turned into his own namesake. The all-important papers are recovered, and Mandrake has spared civilization from facing the possibility of a second world war.

The ironic end for the Cobra.

However, The Cobra didn’t stay a cobra. He returned many years later to threaten Mandrake and world peace anew, in far more sophisticated written storylines.

I would talk to Lee Falk about his earliest MANDRAKE stories, but he was not interested in discussing the subject. I got the impression he was possibly embarrassed by the naïve storytelling that left so many baffling hanging threads. He probably hadn’t given them much thought in many years by that time anyway. Nevertheless, he was a pioneer in the field, and it took at least a few months for anyone to notice the new strip. Outside of the Hearst flagship newspaper, The New York Evening Journal, few others ran it on its first day. By the end of the 1930’s, however, it became a classic.