Ask the Archivist: THE LOCKHORNS Anniversary

This week, I post once again about the prolific Bill Hoest as today’s subject. Previously, we looked at his AGATHA CRUMM and WHAT A GUY! series, but THE LOCKHORNS was his magnum opus. 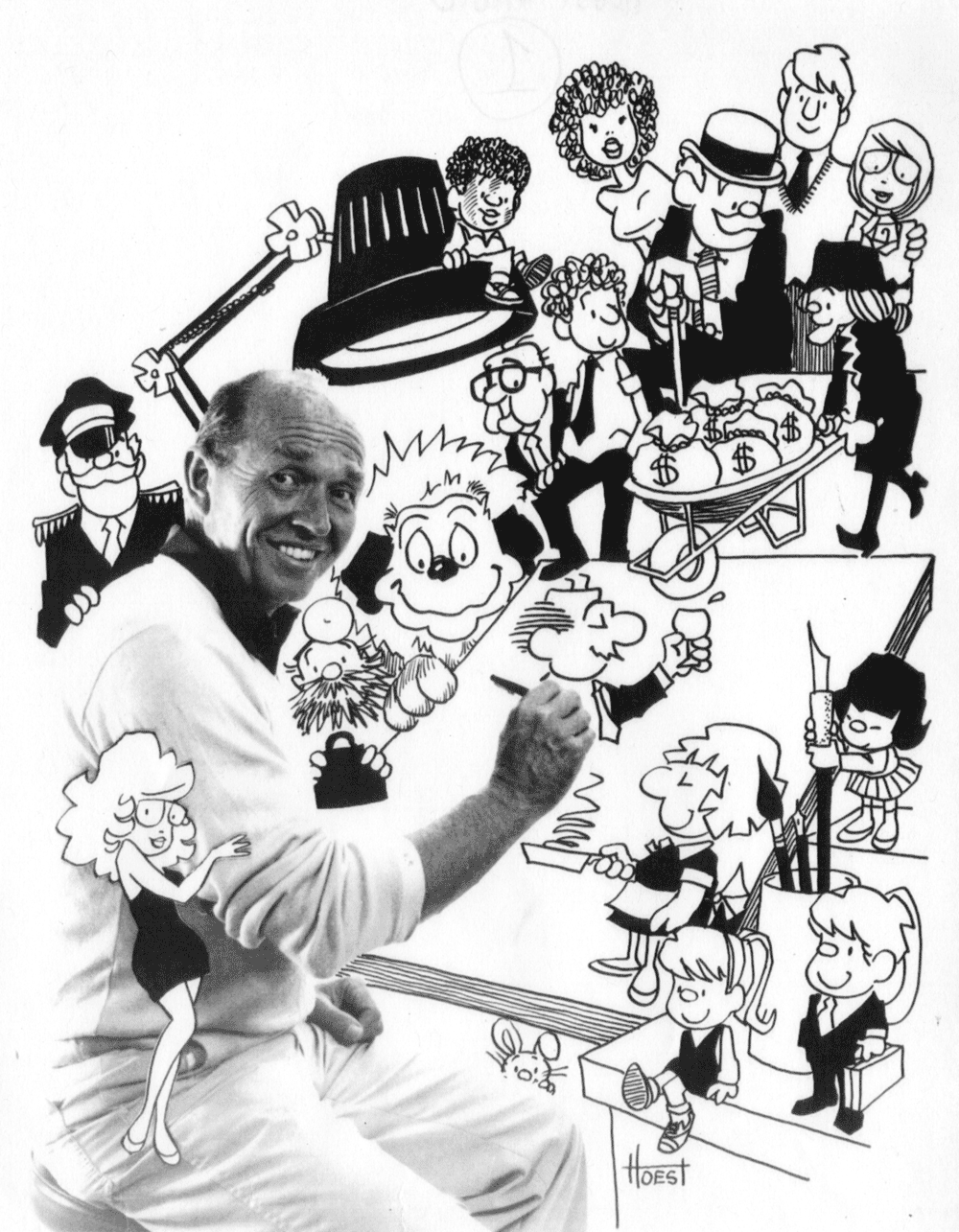 A 1986 promotional photo of Bill Hoest (1926 – 1988) surrounded by his various creations, including characters from AGATHA CRUMM, WHAT A GUY! and THE LOCKHORNS.

There have been unhappy spouses in comic strips before, from the ever-bickering Greens in MR. & MRS. to the battle-strewn, married life of Jiggs and Maggie in BRINGING UP FATHER, but THE LOCKHORNS  is different. Other comic couples would kiss and make up now and again, and their disagreements (and assaults) forgiven, at least for a while. However, Leroy and Loretta Lockhorn never weaken on their position. They genuinely despise each other. Any occasion is grounds for  venomous sarcasm to spew forth with even the threat of physical violence. (Fortunately, we’re spared actually seeing that.) 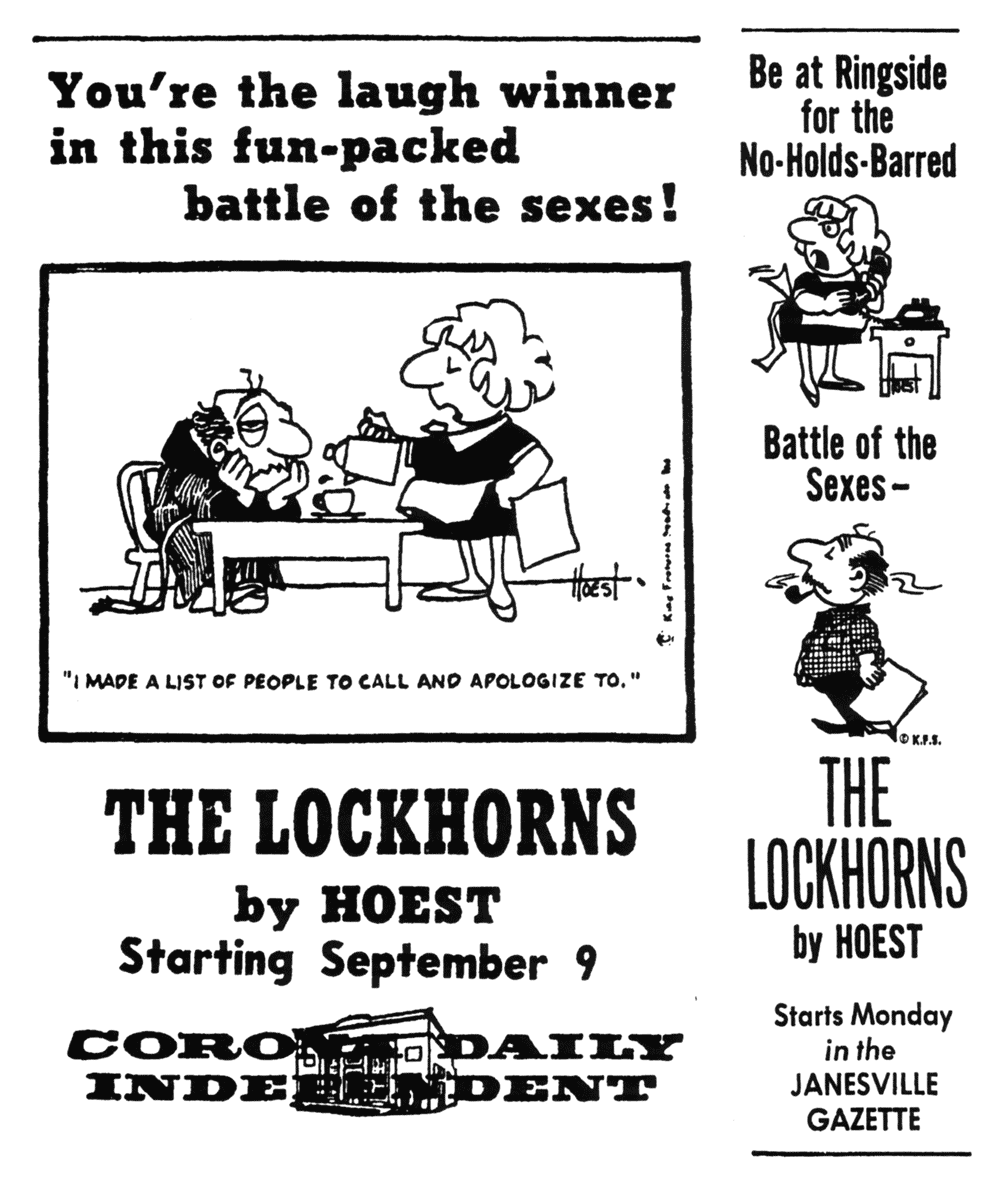 Leroy is a mean-tempered, hard drinking, well-paid executive of some sort. Loretta is a bitter, frustrated  housewife, who is none too right or innocent either. They live in an upscale suburb, which some might say is the ideal of every working class American. For the Lockhorns, it seems more like a Ring of Hell that neither can escape. Jolly little story, isn’t it?  But this dark humor has remained a mainstay of the comics page all these years because it reaches readers who might say, “I fight with my wife, but I could never be that nasty.”  Call it the anti-BLONDIE.

Here are some early samples: 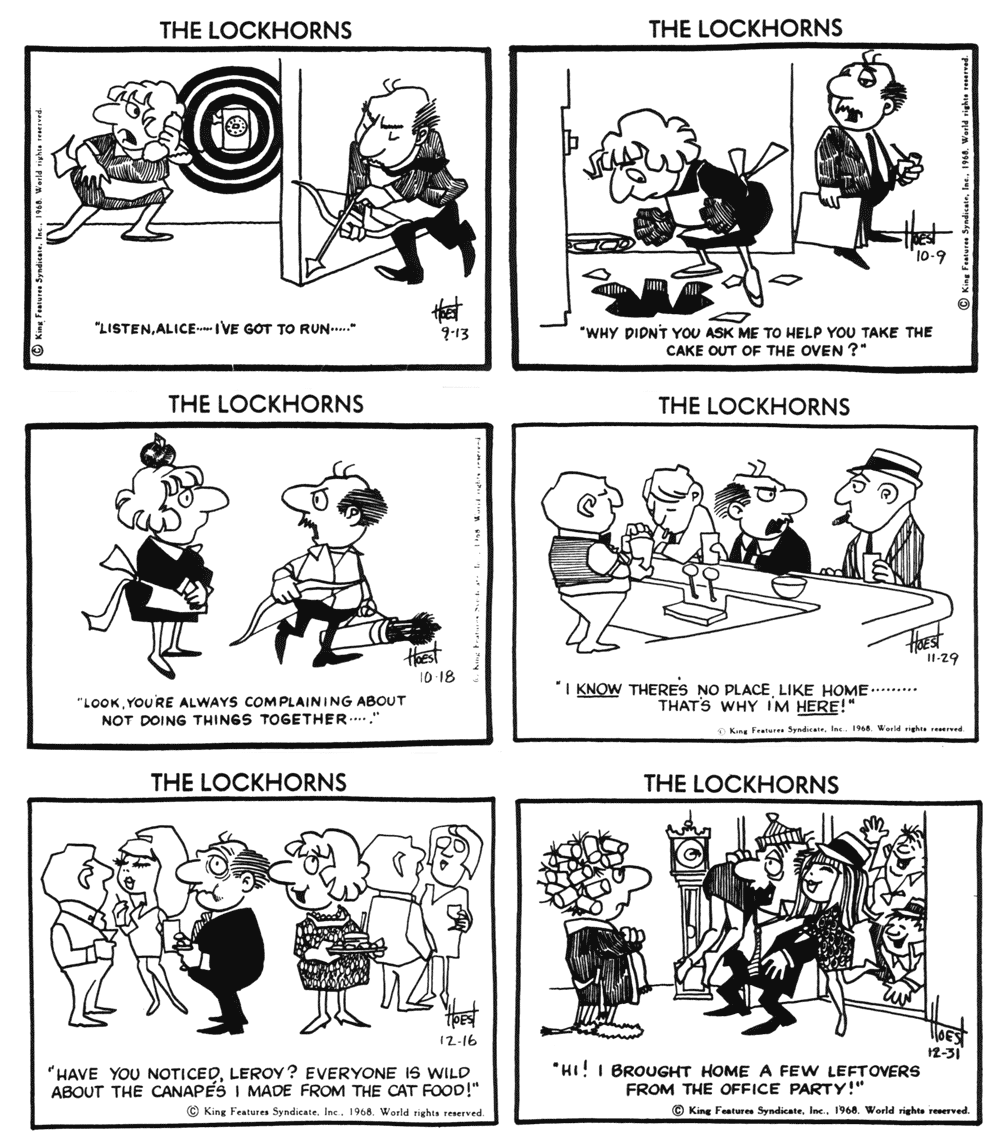 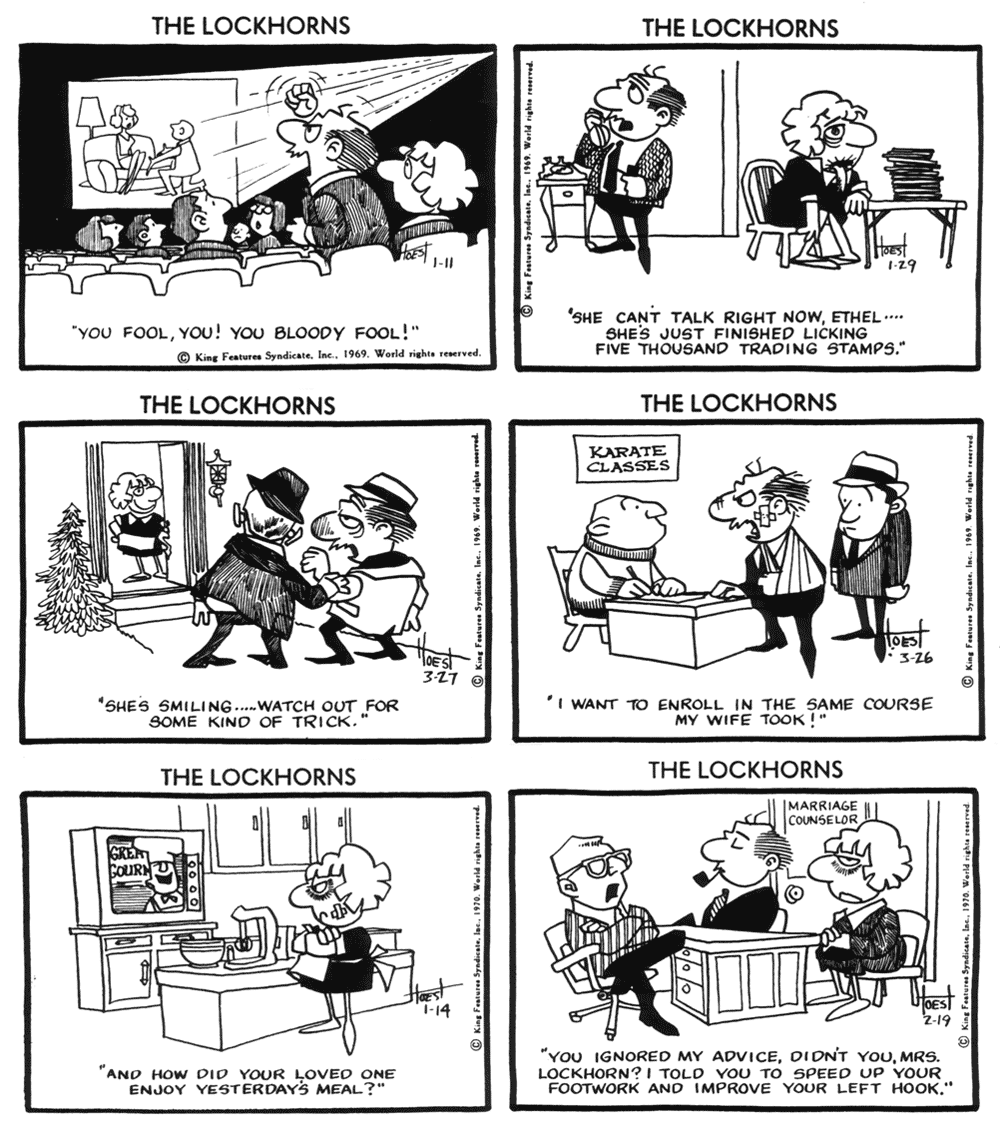 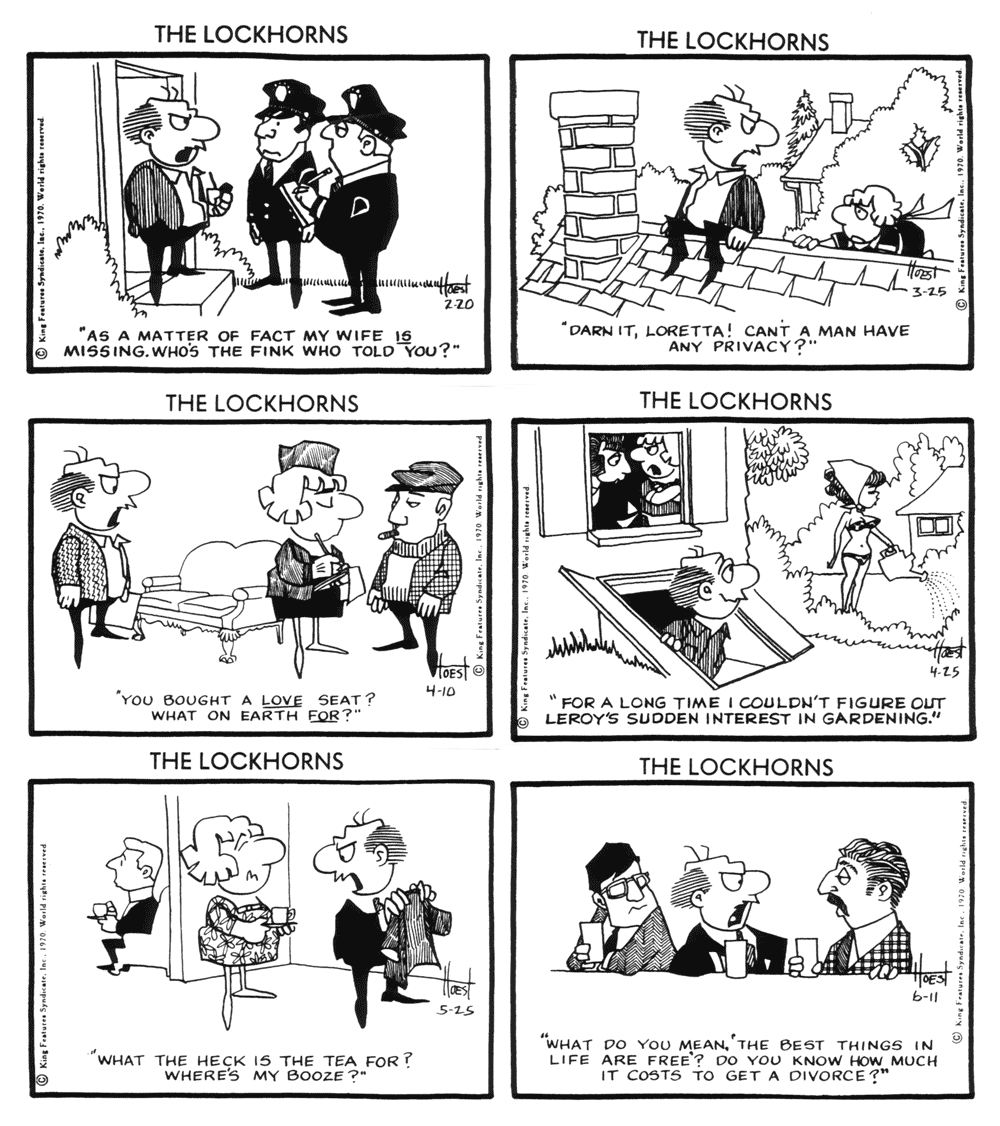 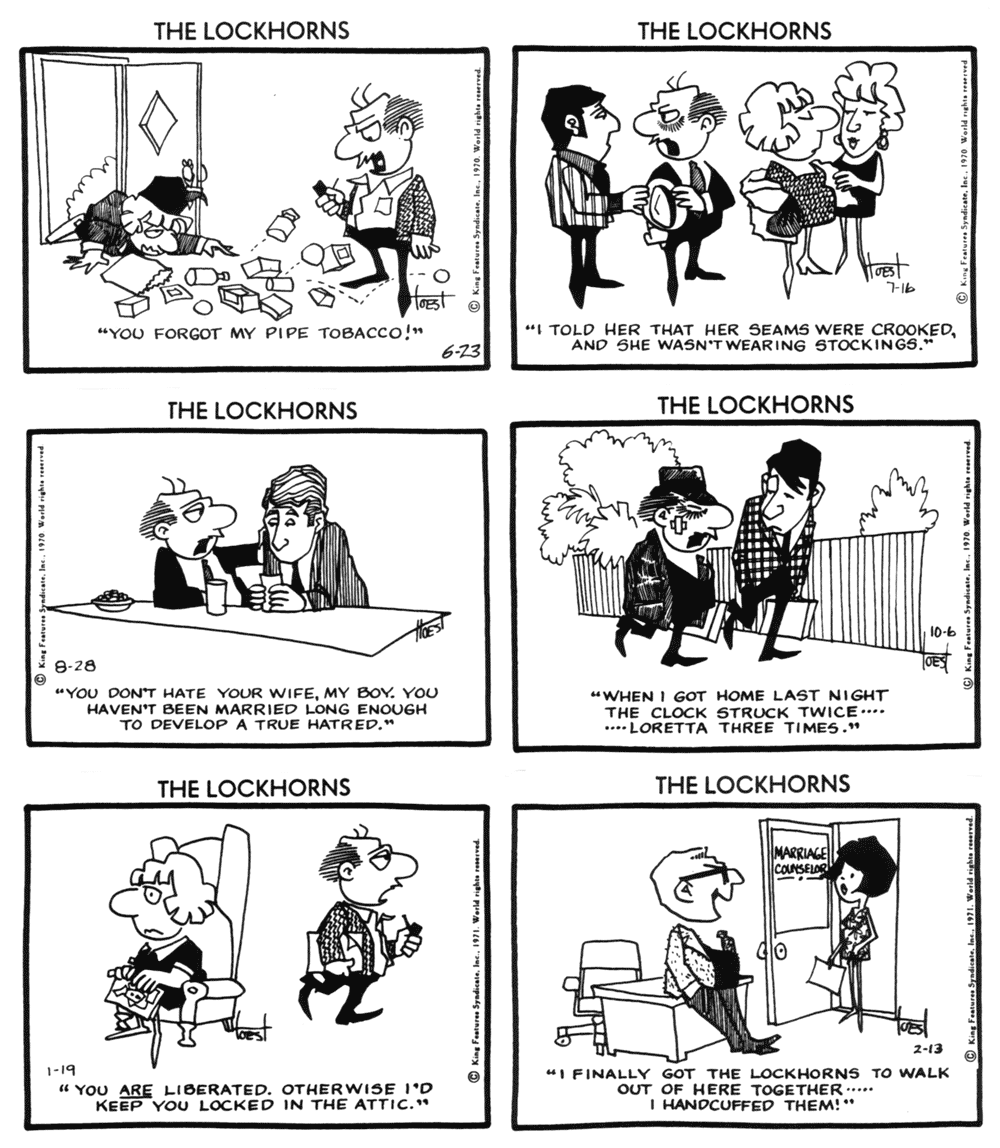 A Sunday panel was added in 1972. THE LOCKHORNS is created today by Bunny Hoest and John Reiner. Compare the old with the new version here.

The crayons are actually a lot brighter (and a bit smaller) than the scan shows. They seem to have lost their old time crayon odor, oddly enough. Though, of course, being wax they still work as good as new.  It’s hard to fathom that at one time small local industries competed with big national ones in America. For instance, these cheap crayons were made by “The Imperial Crayon Company, Brooklyn 21, N. Y.” Today, they would be made in China.

For you kiddies out there who didn’t see 1963 firsthand, the “21” in the address was the precursor to the ZIP Code and was called the postal zone, which functioned mainly in big cities from 1943 to 1963.