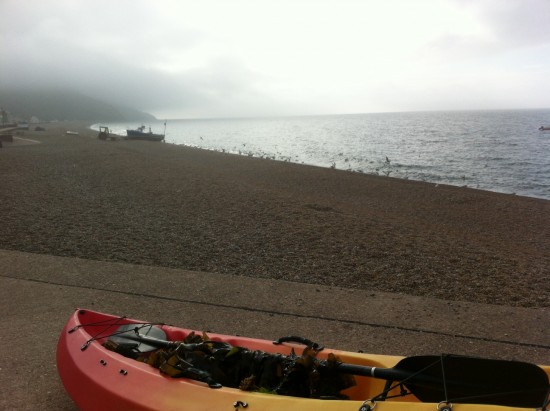 I’ve been back in the UK since last August and after a terrible winter, we’ve been rewarded with a fabulous summer. Since we live just 4 minutes walk from the beach and the Axe River runs into the estuary at the far end, it’s the perfect place to have a kayak. I bought one second hand on eBay about a month ago and I’ve been out on it a couple of times a week since.

I have been trying to catch mackerel (still a sustainable fish to eat) with a handline, but haven’t had any success so far (though I was gifted a pollack one time by another fisherman when I was out in the kayak. I think this counts!). This morning I went out again. Still no fish, but the kayak was the perfect receptacle for all the seaweed that has washed up on the beach after the storms. I’ll use it to make seaweed tea to feed my veggies and then it will become a garden mulch, or go into the compost. If I had cut the sea lettuce off fresh, I’d give eating it a try!