Two weeks ago, MR. WHOOPEE suggested  that the interim KATZENJAMMER KIDS Sundays done from the period of the strip’s return in May 1914 and the arrival of Harold Knerr in November 1914 were ghosted  by Ed Mack, rather than “Billy Liverpool” (a nom de plume and  play on the popular author of that day, Jack London), meaning Myer Marcus.  See Here.

Today, I am going to compare the two with some pretty obscure titles, so it’s treat or treatment time.

Two episodes of HILDA’S TENDER HEART, an Ed Mack series about a dim-witted Swedish housemaid who can’t keep a job. This short-lived series was a Hearst Sunday feature for about seven months in 1913-14. 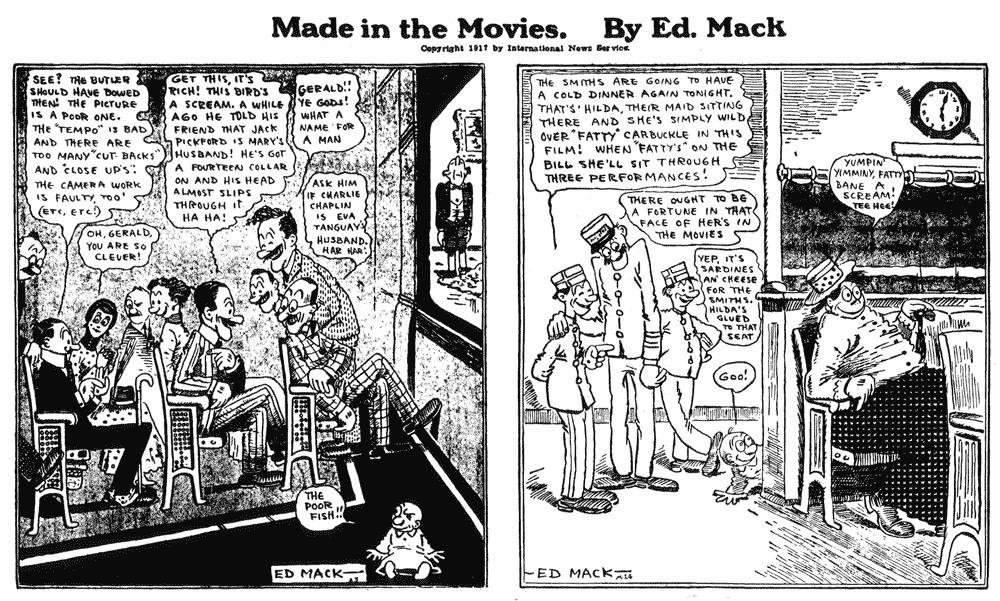 Two from Mack’s 1916-17 daily panel, MADE IN THE MOVIES. Hilda often appeared in the series, as seen here. This was really a repetitious topic. It’s pretty much about folks in the audience commenting about another movie goer, or something gets in the way of the image projection. An unattended baby crawls about somewhere in every episode. 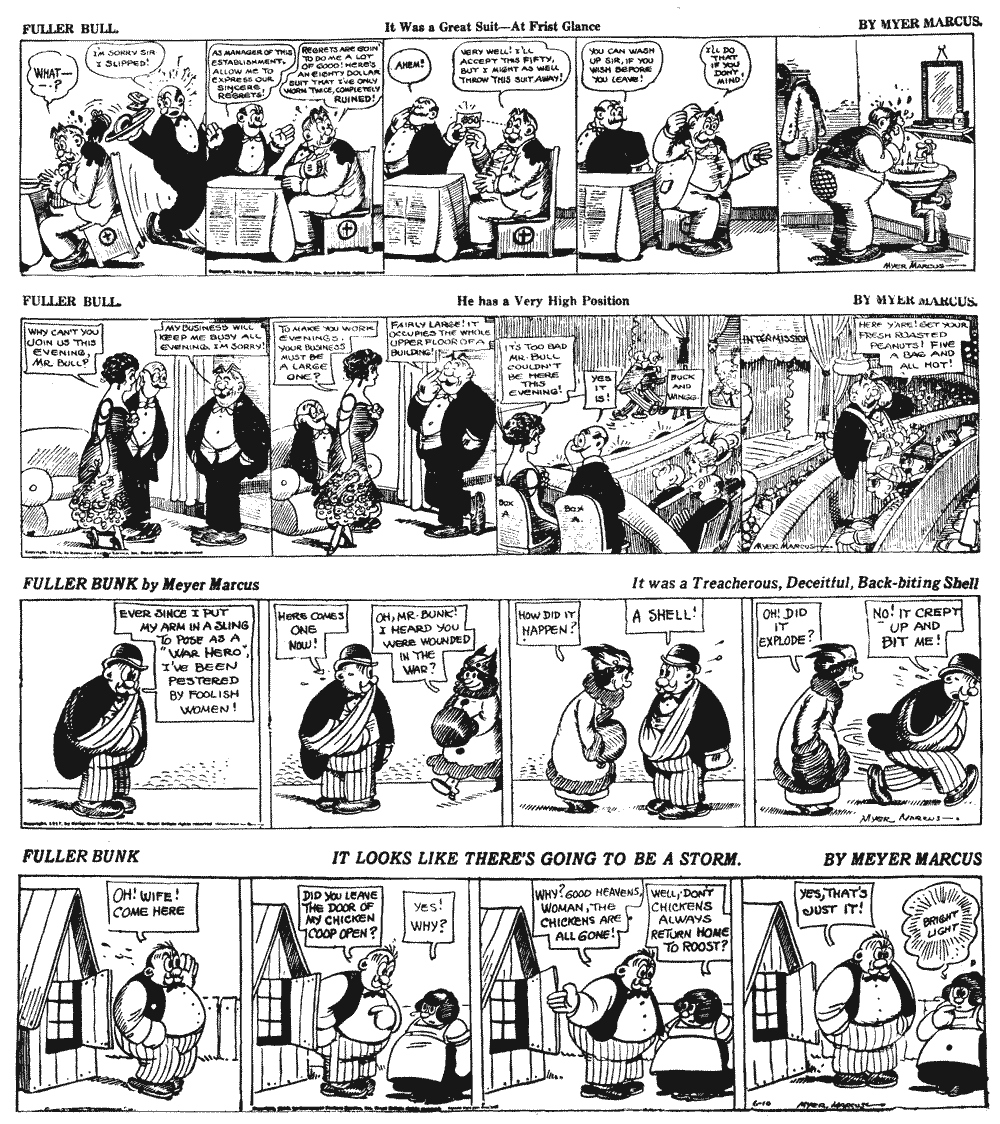 Myer Marcus’ FULLER BULL (1916-20) was a W.C.-Fields-like rogue, who’d cheat, lie and take unfair advantages, pre-dating such better known brethren as BARNEY GOOGLE and MOON MULLINS. For some reason, his name changed to FULLER BUNK in 1917. Perhaps,that made it more polite. A really funny strip, undeserving of its obscurity. 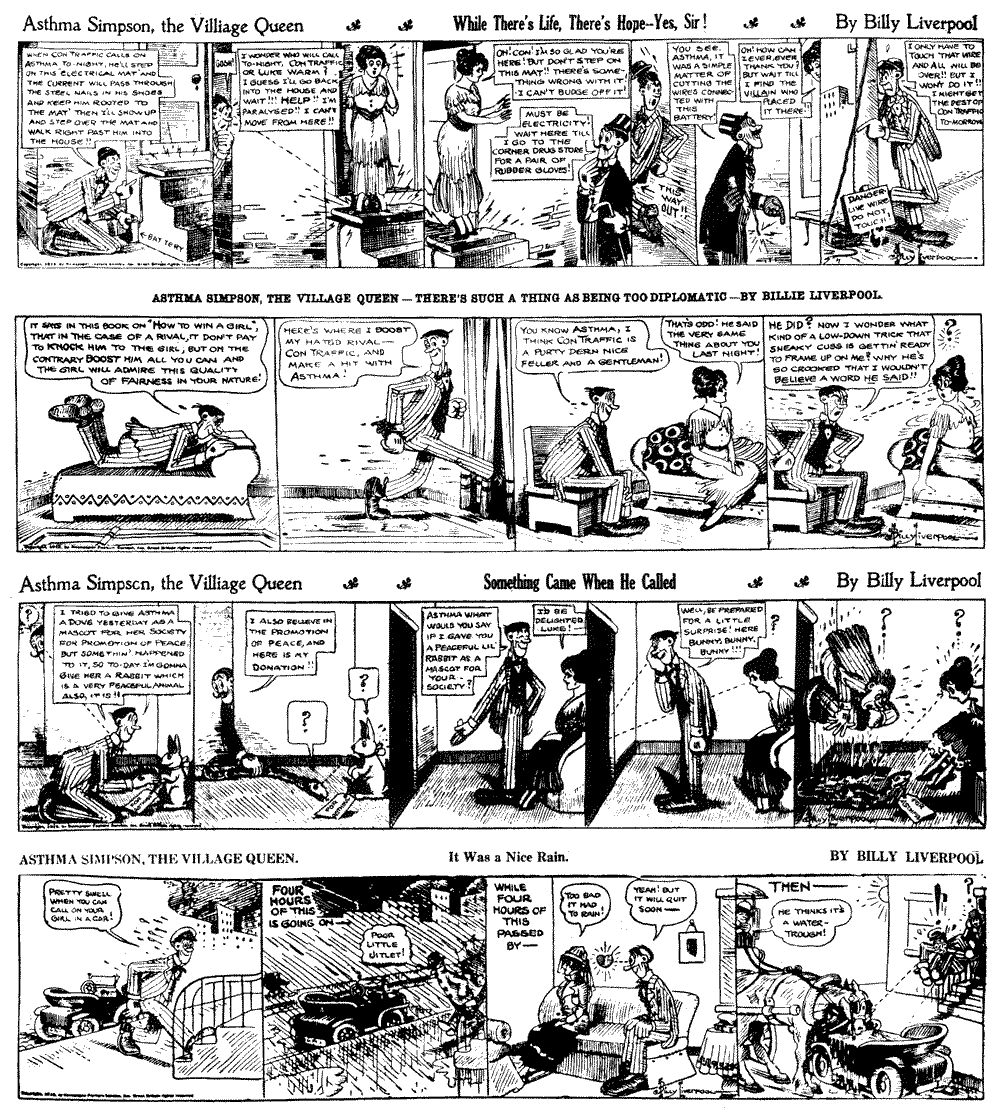 1915-16 Samples of ASTHMA SIMPSON, THE VILLAGE QUEEN. This title lasted from December 21, 1914 to at least November 1916, a long run for dailies a hundred years ago. It is signed by Billy Liverpool, but Marcus did this too. Compare the girl in the second FULLER BULL strip with Asthma—it’s her!

It would seem that both Marcus and Mack had been prominent ghost writers for Bud Fisher on MUTT AND JEFF before Al Smith got the job in 1932, and had been in the Hearst bullpen for years as well. Marcus even got an unusual short-run credit when he took over the Jean Knot panel, PENNY ANTE, in 1920.

So long until next week,