Ask the Archivist: A Serving of “MUSH”

Welcome back DailyINK comics readers to another edition of “Ask the Archivist!”

Here we are again with another old time King Features Syndicate favorite. JUST KIDS was by Ad (August) Carter. The strip began as a panel in 1915 for the McClure Newspaper Syndicate. The panel lasted only about three years before he moved to the Philadelphia Inquirer company, which was an early player in the syndication business but was definitely in decline after World War One. There, he was given Sunday page space, and the title became OUR FRIEND MUSH. The old panels were resold many times over the years to smaller papers. 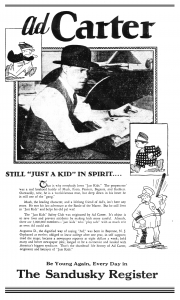 Ad Carter (1895-1957) at his drawing board. He often wore his hat indoors, as he was bald and apparently sensitive about it. Sandusky Register July 21, 1929.(Courtesy of the late Bob Bindig.)

This did well, indeed, a strong competitor for the similar WIDE AWAKE WILLIE that Gene Byrnes was doing for the New York Herald syndicate. By far, it was the Inquirer’s leading strip, in fact, it was one of the only new titles that “the Inky” had offered in years. But its’ building popularity was not unnoticed by King Features, who could and did easily lure Carter to their stable, in the summer of 1923. 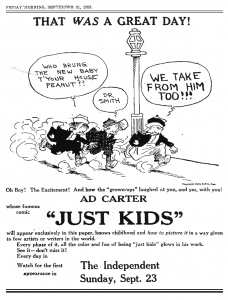 The star of the series was Mush Stebbins, a typical lad of about 10, with the usual boyhood problems as he learned about the world from the view offered from the small town of Barnsville. His companions included: sometimes bespectacled Peanut, a neighbor; a taller boy with the memorable handle, “Bagears”; Marjory Jones, the female interest; Pat Finnegan, a Chinese boy dressed in full national costume; and Fatso Dolan, best known for being fat. Ad once said most of the names for the boys were nicknames of classmates of his from boarding school.  Mush had a mother, father and grandparents, too, and the friendly cop on the beat, Mister Branner, was a constant fixture. He was named after fellow cartoonist and good friend Martin Branner (of WINNIE WINKLE fame.)

JUST KIDS ran for many years, and stayed pretty much the same, with its’ very gentle humor, giving it appeal to younger readers. 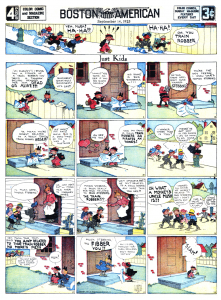 One of the first Sundays. (This was run on a Friday during an experiment where the Boston Evening American ran a two page comic section daily.) 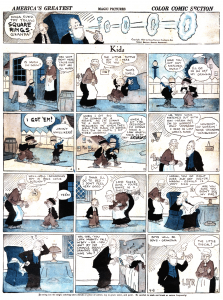 This 1924 episode was called “Kids”. I don’t know why, but the Chicago Herald and Examiner put it out this way. It’s part of a “Magic Pictures” comic section where trick ink was actually watercolor, for readers to paint with. Maybe the Word “Just” is invisible until you wet it. Too bad they don’t do things like that in today’s comic sections. 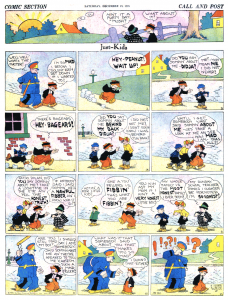 A 1925 strip fromthe San Francisco Call and Post showing some of Carter’s mild but dubious humor.

In 1950, the characters still looked like it was 1915. As the strip’s popularity waned (the daily strip ended in 1947), Carter’s wife, Hannah, became more involved. She earned co-author status and updates began taking place. First of all, Mush’s parents went to the barber and beauty shop, coming out looking more contemporary. The kids all had a change of wardrobe. The most dramatic change took place with the sudden introduction of Mush’s sister, Stelle. The title of the strip was changed to MUSH STEBBINS, and soon after to MUSH STEBBINS AND HIS SISTER. The comedy dynamic of older sister/younger brother was new to the strip, but it was a pretty well-trod path for family sitcoms by then. This modernization came about probably in an effort to save it. Perhaps, it did for a little while but it was retired by KFS along with ELMER (which it was often paired with in half page size) on December 30, 1956. 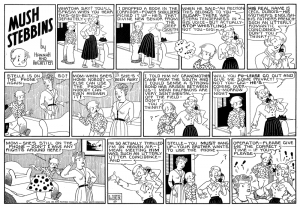 The strip’s name changed on March 5, 1950 as Mush’s sister, Stelle, was added to the cast. Even with his wife assisting, Carter’s artwork just kept declining.

Next week, I’ll write even more on JUST KIDS.