This week’s post was written in response to Matt Ferron’s request, so I am placing the spotlight on PONYTAIL by Lee Holley. 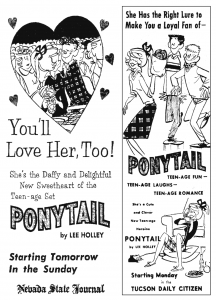 Holley was at one time an animator for Warner Brothers and  got into comic books and strips in the 1950’s. If you’re at all familiar with his work, you’ll see a similar style associated with a man he worked for, Hank Ketcham. He did a lot of the early DENNIS THE MENACE Sundays, for instance. 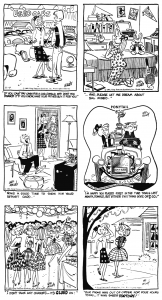 But his own syndicated feature was PONYTAIL, a series very much of its time, celebrating the post-war, all-American youth.  This was a world different from that of earlier kids. The old Andy Hardy or Henry Aldrich of the Depression and war years  was replaced by kids growing up in abundance, new privileges and fabulous toys. A new teen-aged culture built up when kids started having their own money and less responsibilities.

I see by Merriam-Webster the actual word “teenage” only dates back to 1921. In the 1930’s, it is never used except as a novelty word.  But, it became a very serious and profitable concept in the 1950’s.  Think of rock n’ roll, or having one’s own car or own rebellious style.  This new teen-aged culture was starting to be of interest. The movies had Gidget and Dobie Gillis, and later so did TV.  Comics had Archie by Bob Montana, Aggie Mack by Hal Rassmussen, Tizzy by Kate Osann, Seventeen by Bernard Lansky and The Jackson Twins by Dick Brooks, etc.

Elements of this culture were similar, and PONYTAIL is a great example of the genre. Her constant struggle to get more allowance money out of Dad, the anguish of homework, the endless telephone sessions, following every silly fad, drive-in dates, celebrity worship and so on.  Call it the “Beach Party” ethos.

“Ponytail” is probably a nickname. I might have missed when her proper name was used. She is referred to as “Miss Johnson” by her teachers.  She is s fifteen years old, goes to a nice middle class suburban school, Watson Hill High. She has a variety of boyfriends, but mainly a skinny, easily manipulated lad with chronic jalopy problems named Donald Dawson. Her friends include: Rock, the big dumb jock; Sugar Bea, a food addict; Penrod, the bespectacled genius; Scooter, the standard issue nasty little brother; and her put-upon parents. The strip was a daily panel from November 7, 1960 to  October 15, 1988, with a Sunday version from January 7, 1962 to October 16, 1988.

The Chilean version of the first PONYTAIL comic book (1962).

I haven’t heard the story that the NUBBIN creators just re-routed old drawings with Xeroxes and a drafting knife. I have seen examples of his Ernie Bushmiller’s original art from the 1960’s -70’s where he was doing just that. The rerun NUBBINS were just that, the exact, unchanged in any way artwork, reissued.

There was only one story in PROfiles about NUBBIN. That’s where I gleaned the tidbit that Boltinhoff didn’t want to bother with such labor intensive tasks as drawing Twink’s polka dot skirt and blush lines. Also, the bit about his unease with a lisping character. I guess he was bitten by Sylvester the cat once or something. The syndicate ordered him to keep “Tham” in the strip.

Sometimes other cartoonists came in and helped craft the 50’s dailies, many of the talents from E.C. can be seen, like Harvey Kurtzman, Wallace Wood and even Jack Davis.  Though, they didn’t get a credit.