NUBBIN is a strip that I remember from years ago. It had a very basic gag premise featuring kids’ perspectives on the world, with the children mainly trying to be like adults and doing what they associate with the adult world. 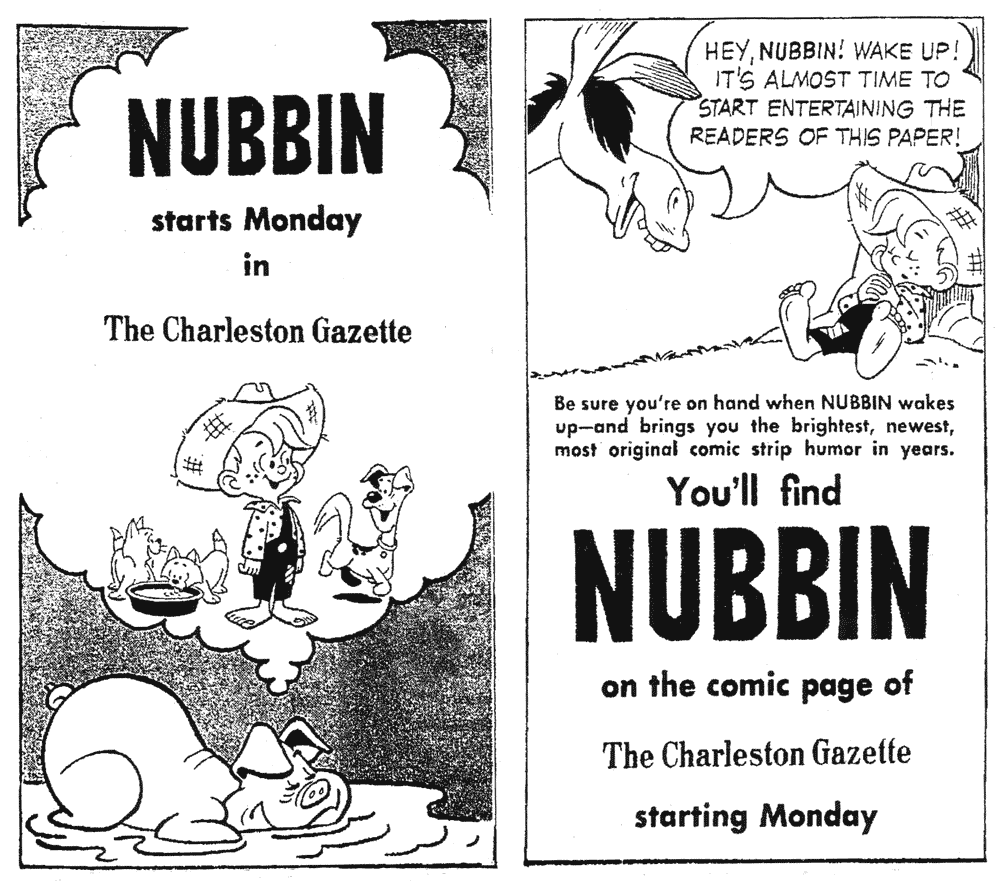 NUBBIN started on March 24, 1958. It was written by Jim Burnett and drawn by  George Crenshaw (under the nom de plume, George Crandall, until June 1960). The strip was about a small farm boy, who dressed like Huckleberry Finn right down to his bare feet.

He talked to all his farm animals, and they replied back. In fact, in the early going, that’s all he had for companions. Not even his parents made an appearance until later on in the series. (His father was a caricature of Crenshaw).

And, what a large cast of critters they were! They all had fanciful, but suitable names. There was Amscray the skunk; Arsenic and Strychnine, the rats; Dizmal, the buzzard; Eggnes, the hen; Flawless, the duck; Gastric, the goat; Moola, the Cow; Nix, the horse; Pudge, the pig; Reville, the rooster’ Tater, the dog, and many more.

Nubbin Stubble’s rural environment, though unnamed, seemed to be in the south, most likely Florida. There is a nearby “Omagollee Swamp,” and an inhabitant who we eventually meet, Ugh-Lee, an Indian who appears to be a Seminole. Along the way, we also meet a friendly monster-like swamp dweller named Eek, whose species is scientifically known as an “Absurdus Preposterous.”

Clever as the animals were, the gags were mainly based on overstating the obvious, or misinterpreting events by a child and his child-like pals. It had to have some conflict. On the strip’s first anniversary, the conflict came in the form of a little girl named Twink.

Twink was, in some ways, like Margaret is to Dennis the Menace.  She was all the things that confuse and bother boys. She was vain, fussy, selfish, dense, but nevertheless adorable. In some ways, she might be more like Lucy from PEANUTS, as she was also given to temper tantrums and hitting poor Nubbin with a purse or parasol. About the only time he had the upper hand was when they played office, where he was the boss and he could tell off his secretary.

Another PEANUTS-like device was to use crates with signs, like a lemonade stand, to aid in their play-recreation of the adult world, crates with signs. The sign/crate could become all manner of things from the aforementioned “Nubbin’s Office” to a fix-it shop to an auto dealership. Twink could make use of these props by selling five-cent charm lessons, hosting an antique stand, or dispensing onerous loans. Often seen was “The Big Wheel Club,” where  anyone could say something to the group.

In the late 1960’s, an unfortunate frequency of repeats are seen. These are not just repeated gags, but whole strips are recycled with only a new date and copyright slapped on. Perhaps, the busy Mr. Crenshaw couldn’t keep up and do his other works (Most famously, BELVEDERE) too. In 1971, veteran cartoonist Henry Boltinhoff took over, simplifying the strip’s style. For instance, Crenshaw’s shading lines went away. Boltinhoff got rid of the polka dots on Twink’s skirt because they were too busy. His influence on the gags was a lighter touch too. Twink wasn’t so ready to hit anymore. He also didn’t like Tham, the lisping duck, because he felt sensitive to disabilities. Somehow, NUBBIN went on until 19 September 1987, remaining a daily only through its 29 year run.

To Pete:
We aren’t doing a March Madness this year, but we will be doing some exciting things with the archives and current titles later in the year so keep checking.

Trudy could be added later- certainly if there’s enough desire for it from you Fatkat fans.

To Bernie:
TRUDY could be added, especially if we hear from all you Fatkat fans.

Your idea is a good one. I may use it in the next few months. Thanks!

I will do a post on PONYTAIL. Glad to do it. You’ll see it sometime in April.