At one time, Mort Walker had so many strips going at once he called his studio “King Features East.” Some of them have come and gone, such as MRS. FITZ’S FLATS of 1957 to 1972, which we looked at here on 13 June 2012.  He and later Fred Johnson drew a long running strip for all animal lovers. 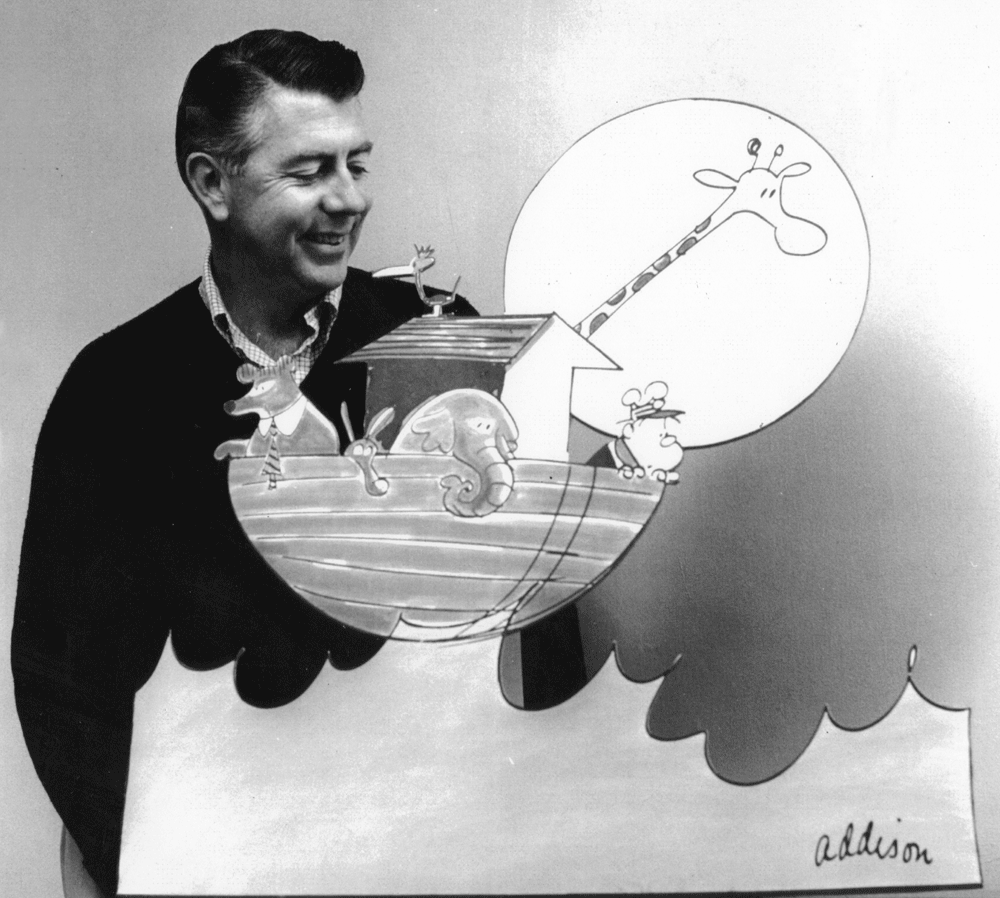 It was BONER’S ARK(1968-2000), which was always signed “Addison”, Mort’s middle name. It was a funny series, the setting was inspired by  Noah’s ark, only Captain Boner was no great seaman, in fact, he was the least likely to carry out a Noah-like project because he was so dismally incompetent, he didn’t understand navigation charts, or any of the machinery in the wheelhouse, and didn’t even know much more than how to steer. He foolishly built his ark out of Knotty Pine, which lead to having “Knothole Duty”, consisting of someone having to keep a finger in the leak holes below deck, lest the ship fill with seawater. But his worst foul up was his unfortunate oversight of taking only ONE of every species aboard before the deluge. 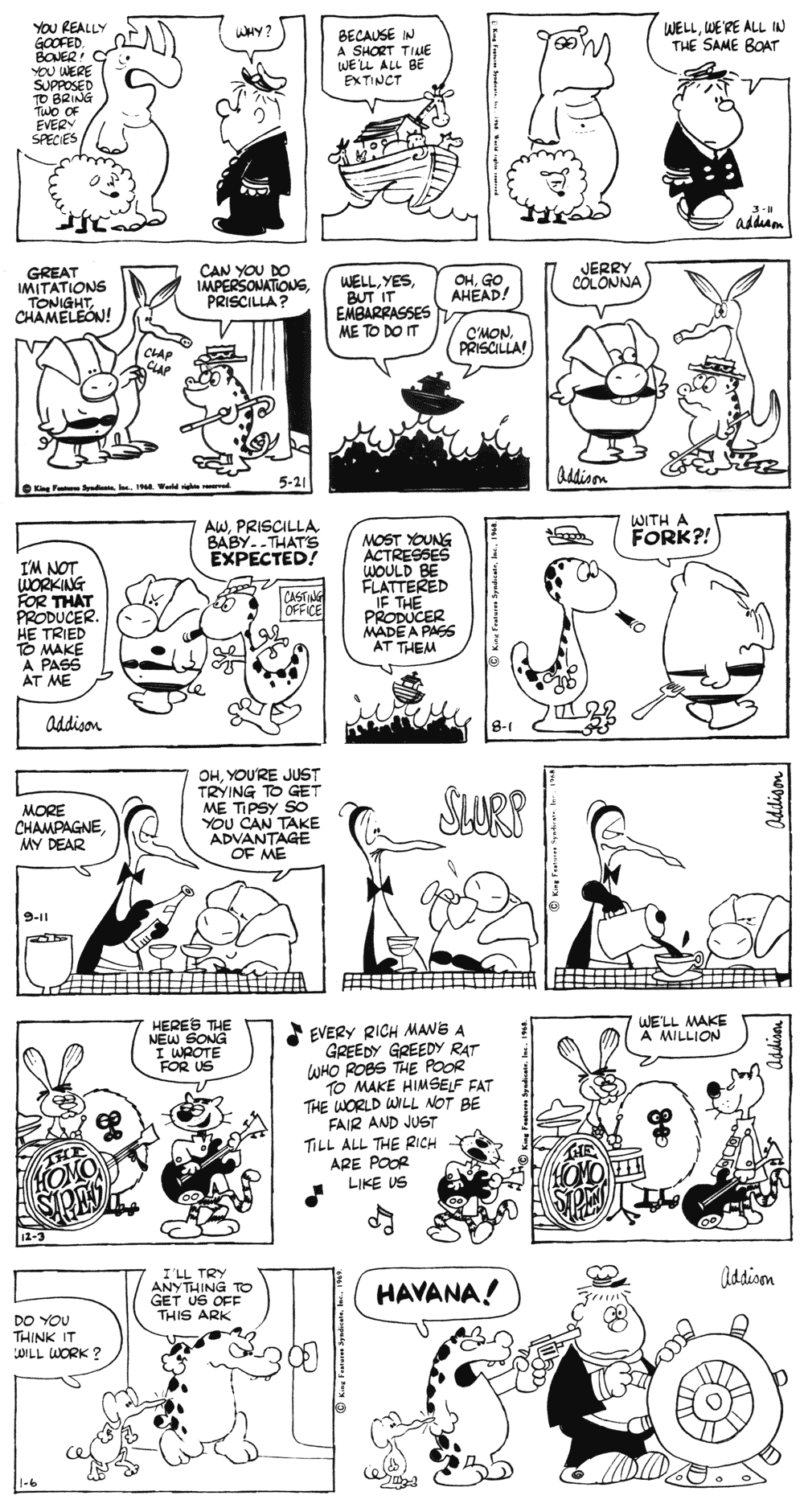 The animal passengers were mostly a collection of human character failings; Duke the Penguin was a snob, Gop the Elephant and Dem the Donkey would always bring politics to a fist fight, Mom Goose was a scolding busybody, Hyena was an angry troublemaker, and Dumdum the Gorilla was not named for his cleverness. 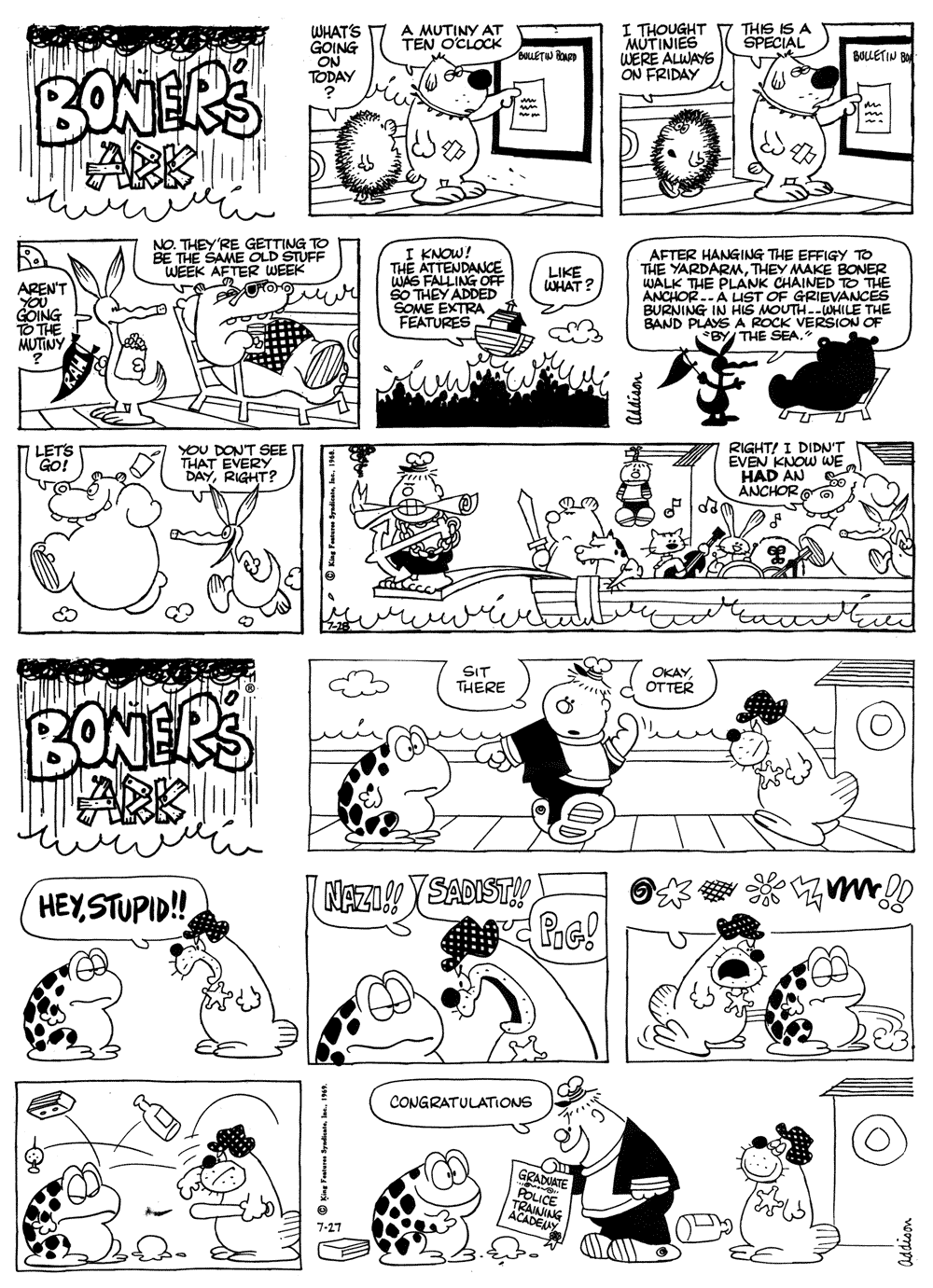 The star of the group from the start was Priscilla Pig. She was a short, and fat, and obnoxious to the mostly male other animals, yet she was convinced she was destined to be a sexpot movie star, usually dressed in a string sized bikini that didn’t make a difference. She pined for Duke to care about her, but he didn’t. It was Dumdum who was in love with Priscilla, though he could never get further than hand holding with the frustrated porker. 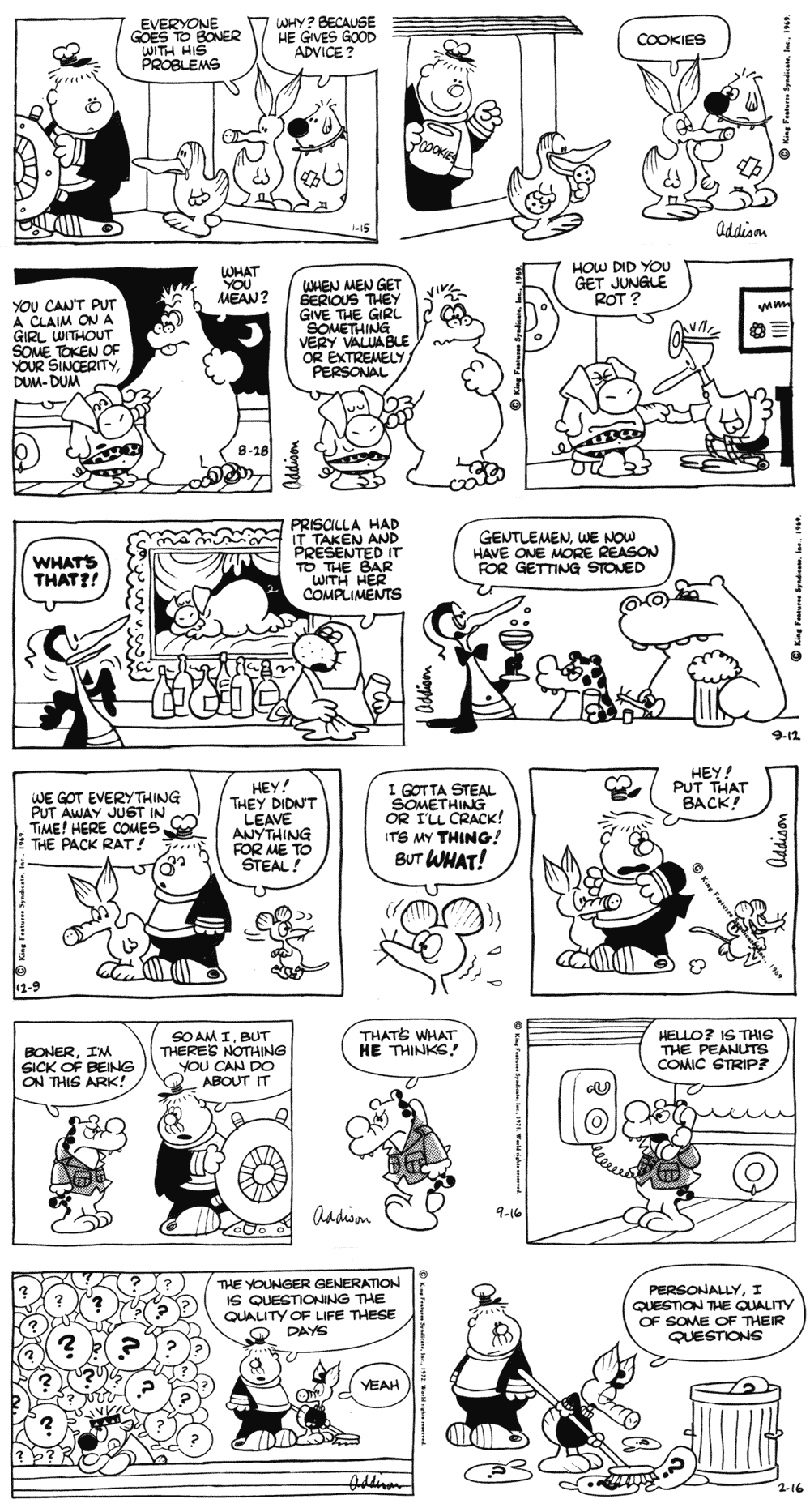 Boner’s cruise began forty-five years ago this week, on 11 March 1968. We never saw the backstory as to how this came about, I guess in the tradition of fantasy fiction, we just have to take what we see on its own terms. After all, if we can accept that animals talk, we can believe they could be on an endless, miserable cruise, too.

The animals often rebelled against their skipper’s bungling by having a mutiny every other week or so, ending with Boner’s walking the plank, Captain Kidd style. But he’s always be back the next day, hardly resenting his rough treatment. 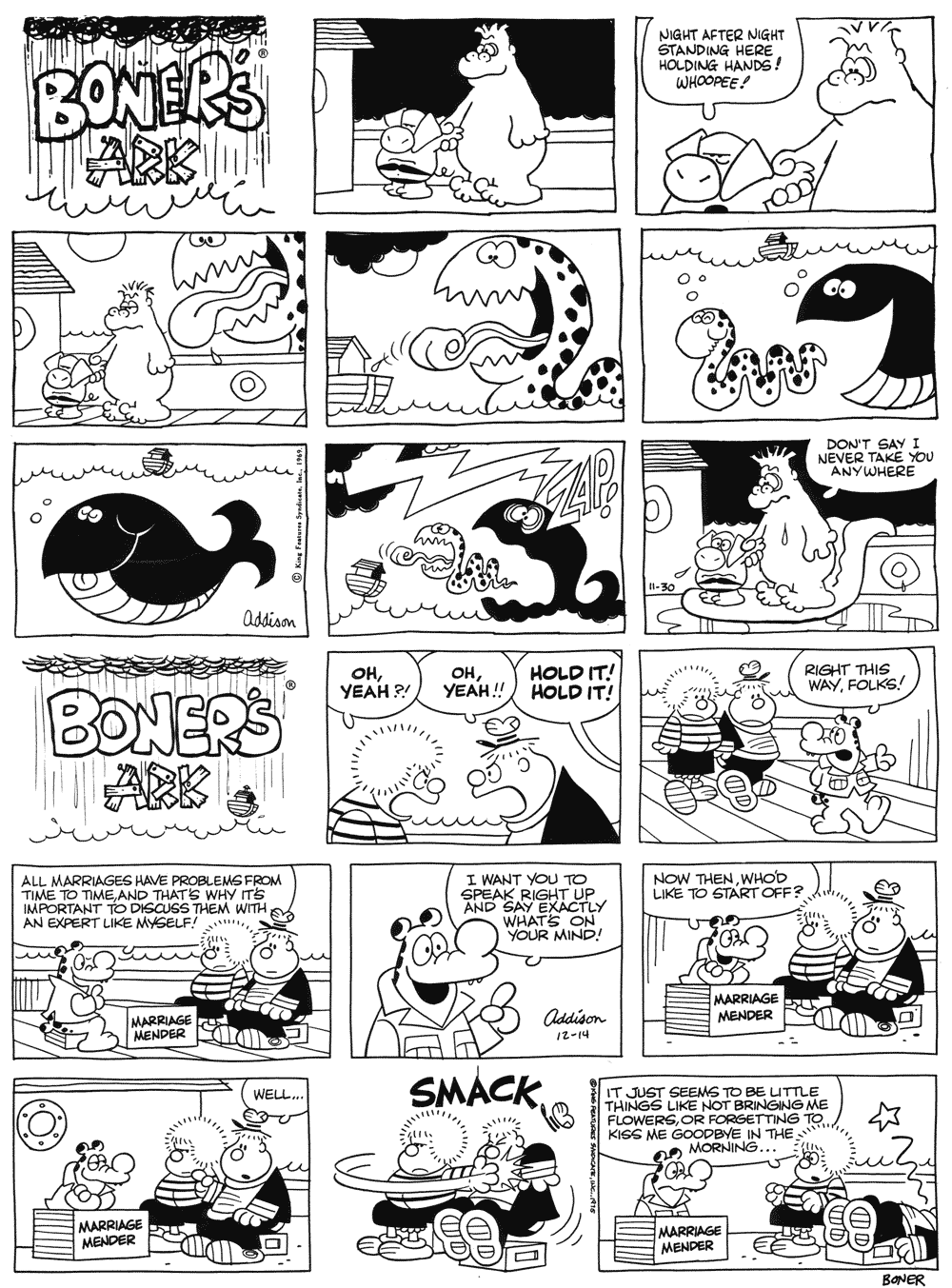 Others in the menagerie were Boner’s right hand man, Aarnie Aardvark, the bullying Rex, the Tyrannosaurus, (there were several dinosaurs aboard!) Officer Otter, the ineffective police force, Three-Can the Toucan, Turtle the mailman, Llama the guru, and Orangutan, who sat on the deck listlessly staring like a zombie all day.  The cute little Koala bear was chosen to be the center of interest for a while in 1970. The bear was often seen asking innocent questions and observing the cast foibles, but he was known only as “Little Koala Bear”.  So, they ran a contest where readers would select a name him, and the strip was popular enough to generate 49,329  entries from around the US and Canada.  The winning submission, “Cubcake”, was sent by  Mrs. Georgianna Bender from Scranton, Pennsylvania. She won a two foot tall papier-mâché statue of Cubcake, worth $50.00, made by Mort Walker himself. That it was in fact, worth that much was guaranteed by Mort because he filled it with fifty dollars’ worth of coins and bills. Runners up got autographed posters of the lovable Koala. Autographed by Mort, not Cubcake, one would think. 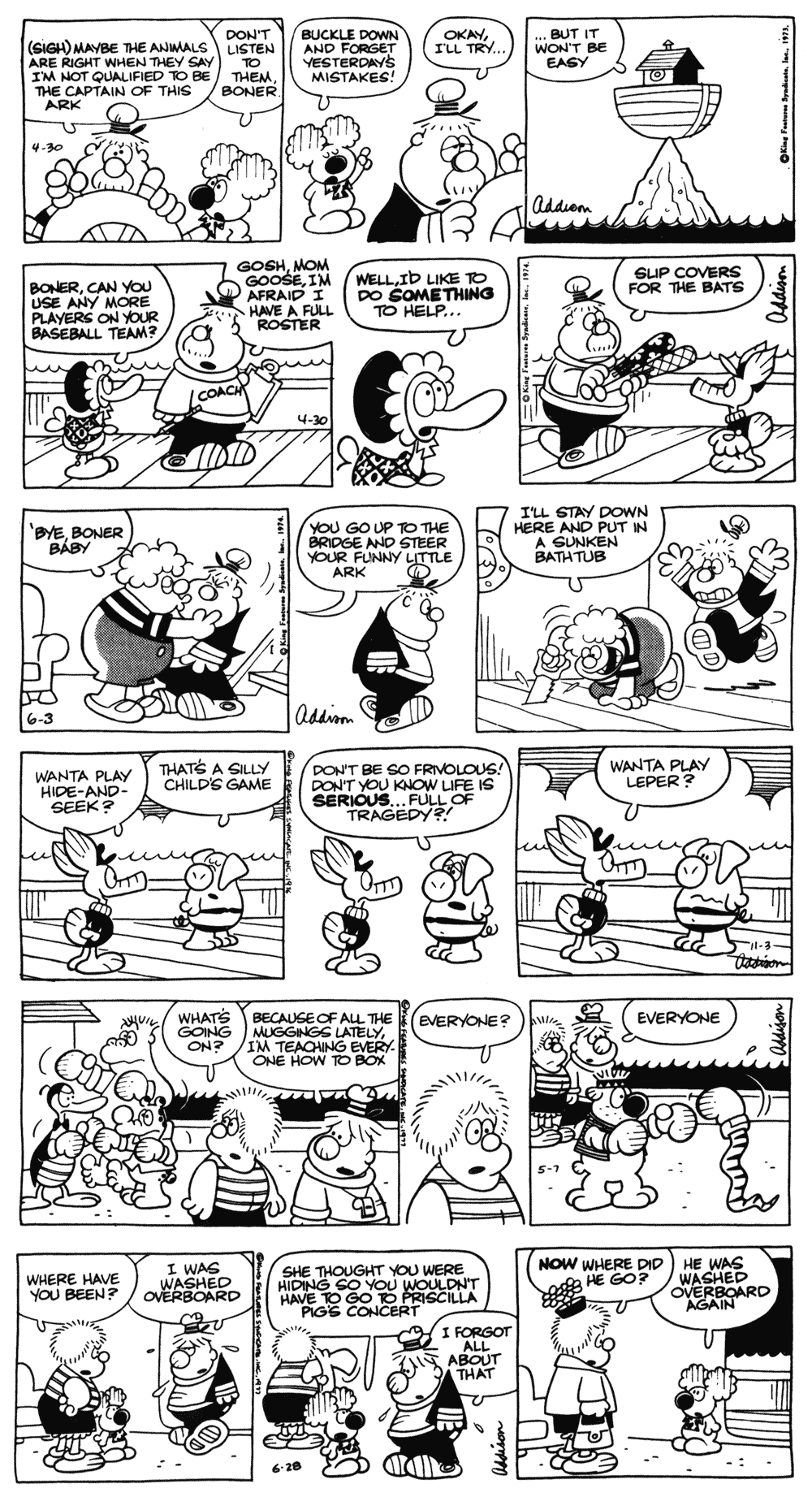 In 1974, found floating on a raft, was Boner’s wife, Bubbles. She joined in on giving him more headaches, as she was very energetic, high spirited, and a bit goofy. But in no time at all,  she showed just why Boner left her behind in the first place- she was devoted to making his life miserable, and their constant fighting lead to a familiar scene over the years, a visit to the marriage  counselor, played by Hyena, where nothing ever was resolved. In fact, most of the time, the cast was at odds with each other, which of course meant a rich vein of comic complications.

A Brazilian comic book (1972) where Boner retained the name of the original ark builder. 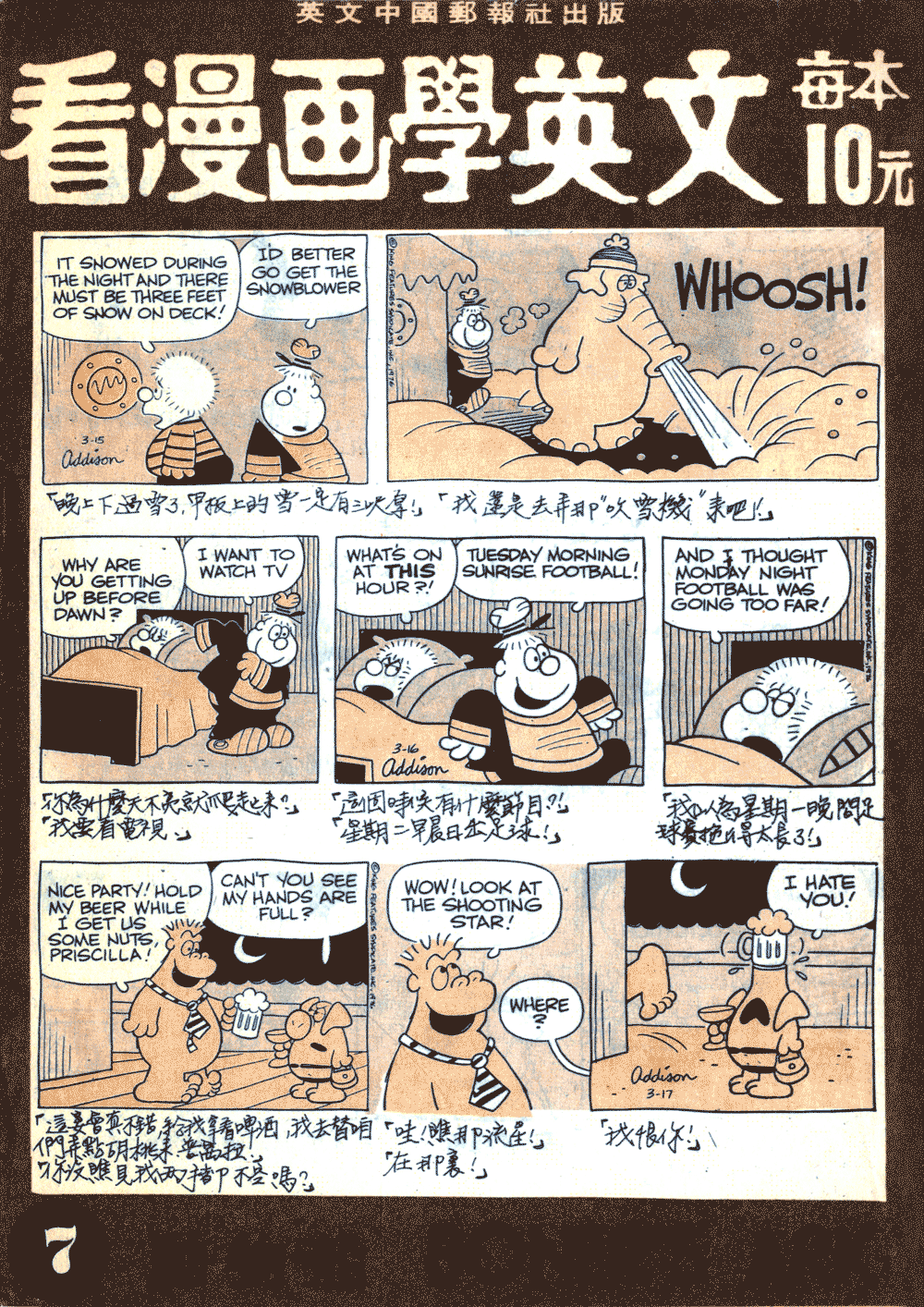 The South China Post (Hong Kong) offered this Boner comic in 1977. The name in Chinese is still BONER’S ARK, spelled out as phonetically close as possible.