Ask the Archivist: George McManus at 129 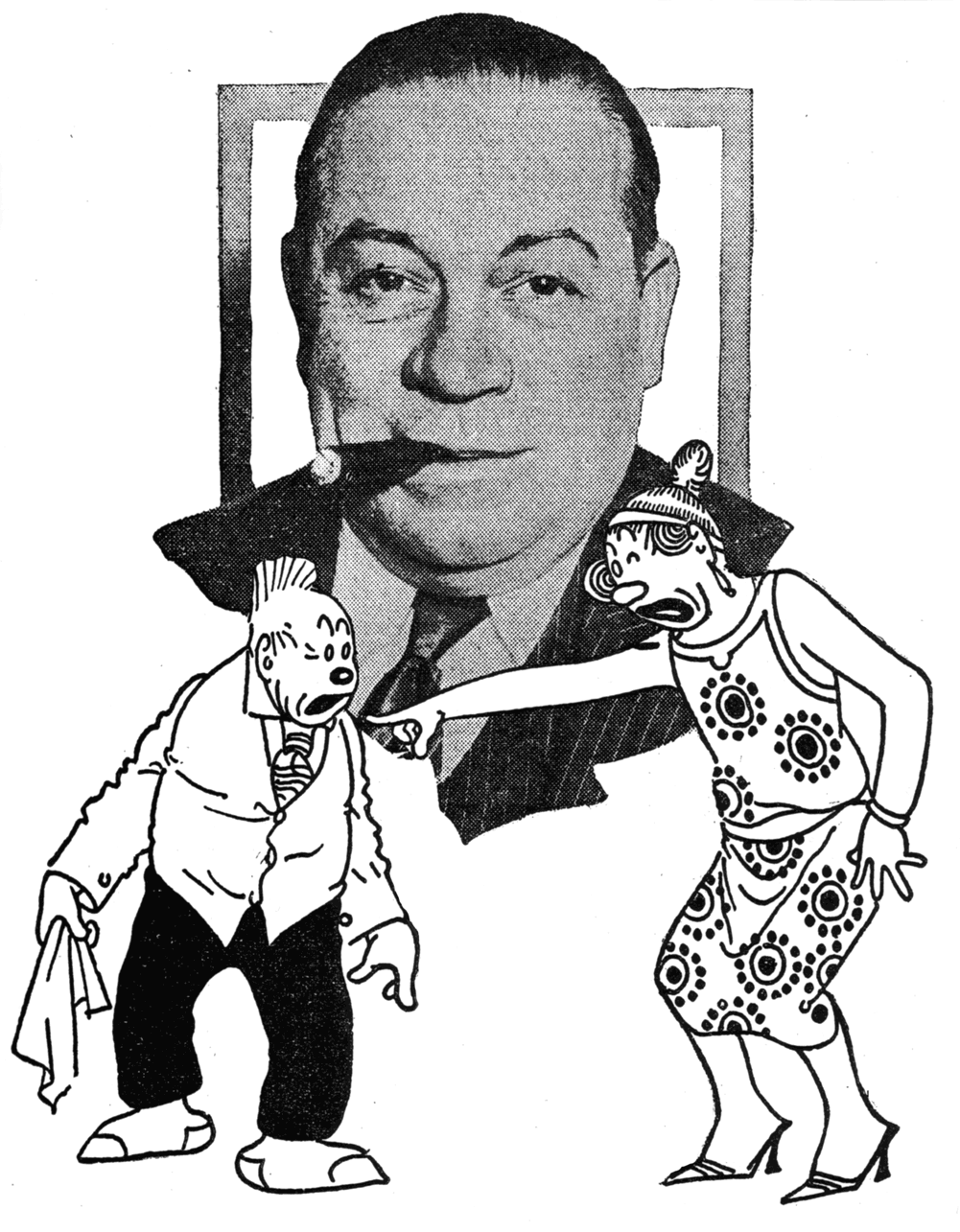 As part of the BRINGING UP FATHER centennial this year, we take a look at Jiggs and Maggie’s creator, whose birthday is today.

The man who created perhap the most popular strip ever was George McManus. He was born January 23, 1884, in the midwestern city of St. Louis, Missouri. He attended Central High School, where his English teacher, Miss Brown, noticed his goofing off in class and drawing funny pictures. Apparently, as a punishment, she sent him home with a note to his father.  But, years later McManus recalled, “When Dad read the note, he surprised me by saying, ‘Well son, what do you want to do, go on with your studies or go to work on a newspaper?’ ‘I wanted to go to work’ was the reply.”

So, George got his first job as  an “artist,” sweeping the offices and doing errands at the old St. Louis Republic. Eventually, he was given small tasks that would engage his talents with a pen, like doing the line drawing borders that often surrounded photos which was common practice in the 1890’s.  Eventually, he was doing cartoons and a comic strip, ALMA AND OLIVER, when the Republic started running Sunday funnies. Also noteworthy was his weekly ¼ page drawing of a beautiful girl with intricately detailed hair,  something that McManus would be famous for.

This was at the turn of the century when comics were becoming a real business. McManus itched for the big time, so he took a tip on a racehorse named “Hamburg Belle” from a bootblack. It was at 30-1 odds, and he bet $100. It won, and he took off for New York. He would tell of making the rounds of the big newspapers in town, only to soon be sleeping in Central Park. But then, several offers came in at once. He always claimed that he took the lowest paying one, from the New York World, because the chain that owned the World also had a newspaper in St.Louis (The St. Louis Post-Dispatch), and so his New York cartoons would be part of the weekly offerings of the Pulitzer–owned “Press Publishing Company” syndicate. And they would  appear in his old hometown.

(The truth of the matter is, and he would have certainly known it, that Hearst material was also running there in both the St. Louis Star and his own Republic at that time, so maybe this just sounded better as an explanation as to why he wasn’t always with Hearst. The Republic folded in 1919. Who’d ever check up on it? )

At Pulitzer, he created early classics like Nibsy the Newsboy in FUNNY FAIRYLAND, ( a knockoff of LITTLE NEMO), and Panhandle Pete, a world-travelling, raggedy tramp with his famous stove pipe. That is, he smoked a pipe with a tiny kitchen stove for a bowl. 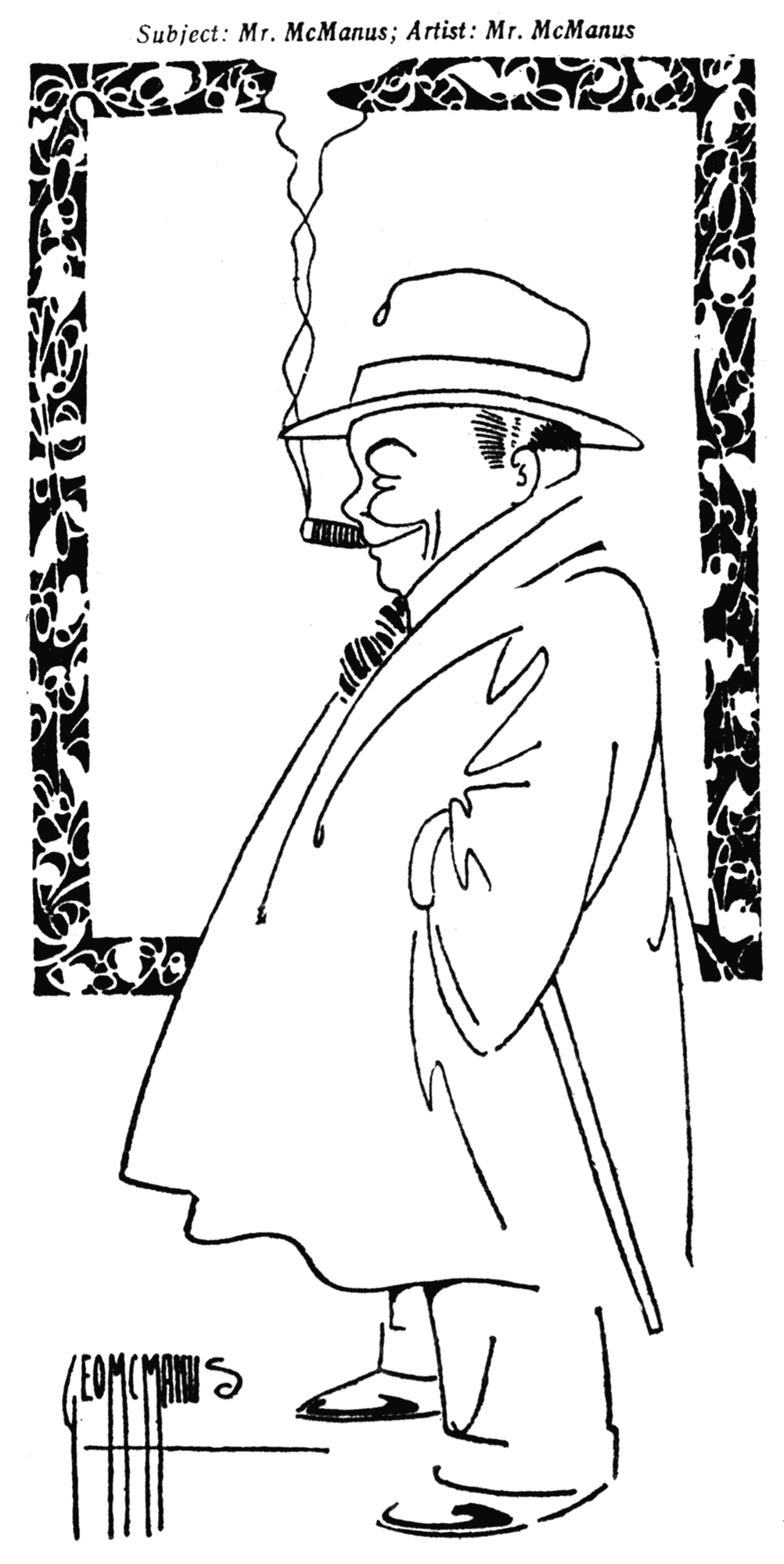 But his most endearing creation  before Jiggs was, or were, “THE NEWLYWEDS.” The young, terribly in love couple became the top title in the Pulitzer “Funny Side” Sunday section. When Hearst coaxed McManus over to our side in mid- 1912, he took the characters with him. (See Archivist blog of 29 August 2012).  In the field of daily strips, George had an open field. He did several obscure series that didn’t amount to much, including LEAVE IT TO GEORGE, OUTSIE THE ASYLUM and THE NEARLYWEDS, where a couple never makes it to the altar. BRINGING UP FATHER began with 1913, and it would fast become the McManus magnum opus. (See Archivist blog 2 January 2013). Soon, licensing Jiggs for toys, books, and movies would profit McManus millions of dollars and worldwide fame. Roanoke College gave him a degree, he was the first celebrity honored by the Banshees, and Senator Mathew N. Neely (D-W.Va.) read a paper of praise on the Senate floor wishing that “Jiggs and George could be as eternal as the everlasting hills.”

On a return trip to St.Louis in the 1920’s, McManus called on his old teacher, Miss Brown,  to talk over old times and acquaintances. They did, but in an ego-checking moment, if he needed one, she’d never heard of BRINGING UP FATHER and asked him what he was doing now!

Owing to the time a cartoonist has to keep ahead of a deadline, it would be impossible to include a very timely mention of a great event before the event would be stale news. For instance, the end of World War Two took place when the Japanese surrendered on 15 August 1945. In a remarkably quick turnaround, Roy Crane was able to write his way out of a story Buz Sawyer was in the middle of and end his tour of duty on 28 August, announcing over a radio that the war had ended, surprising Buz, but that was almost two weeks later. In TIM TYLER’S LUCK, though, they just bailed out of the story they were in and started fresh with honorable discharges on 3 September. Other events, like Pearl Harbor and JFK’s assasination were not seen in the strips. I think that would’ve been viewed as a mockery.

The FLOP FAMILY gag about the 7″ TV screen is a relic of the days when the first sets were offered, which had tiny picture tubes. Often, they would be encased in an expensive, large wooden cabinet suitable for a  parlor where fine furniture would be seen. However, by the date of the strip shown, 1981, TVs were cheaply made, plastic and transistorized disposable products that came in a wide variety of screen sizes, so that there could be one in every room in the house. That George Swanson was unconcerned about using  a Truman-era gag in the Reagan-era world, like the aforementioned hat and coal gags, might suggest he hadn’t left his studio since 1950.