Ask the Archivist: A Successful “Flop”

A few months ago, I mentioned the strip, THE FLOP FAMILY. Well, few will regard it as a great comic. In fact, it could pretty well be defined as the ultimate mediocrity of stripdom.

It was created as a ¼ page Sunday feature, an odd size that several features were issued in at that time, including the early LITTLE IODINE and the Sunday version of the gag panel, PIN UP GIRLS. It was not George Swanson’s  first creation. He had been a major syndicated artist since 1921 when he created SALESMAN SAM for NEA.  He left NEA and joined King Features in 1927, where for a while he did another salesman strip, HIGH PRESSURE PETE.

He began THE FLOP FAMILY in the summer of 1943, with William Randolph Hearst supposedly choosing the name. The new setting would be a change of pace from his frantic, pun-choked slapstick style. The Flop household consisted of a bald, grouchy, cigar-chomping man who apparently is the boss/office tyrant of a small company, though he’s supposedly a lawyer and his nagging housewife, Helen, who endlessly schemes to buy new clothes and lighten her husband’s wallet. 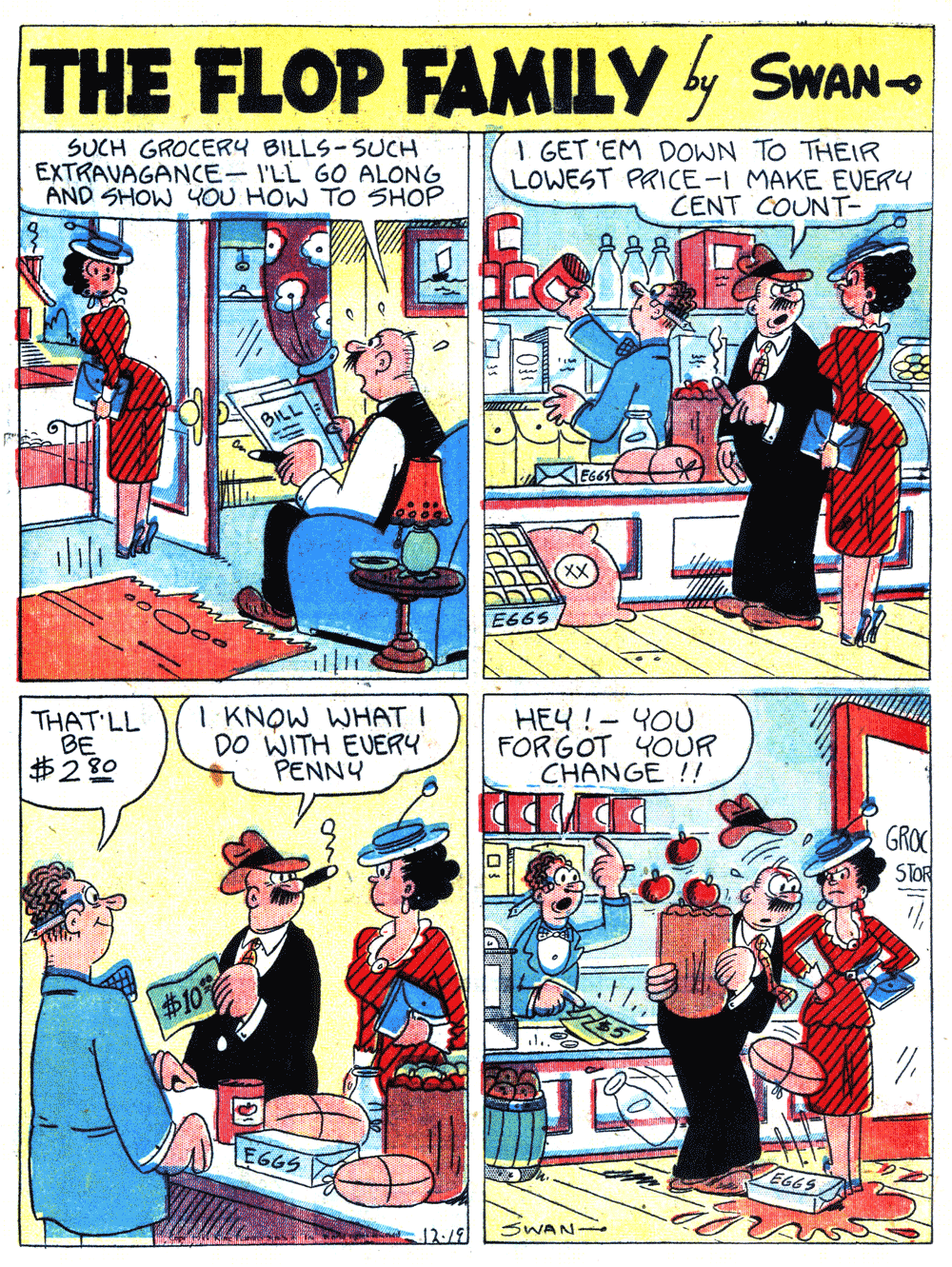 In addition, there is Willie, a conniving little boy with no respect for adults; Otto, the shiftless older son; Greta, the bubble-headed, boy-crazy daughter; and Eunice, the hired help who is not much help.

They have neighbors, the Gabby family, as well as frequent visitors, including long-bearded Uncle Hugo, Mr. Tuttle who is Flop’s most important client, and Flop’s mother-in-law. 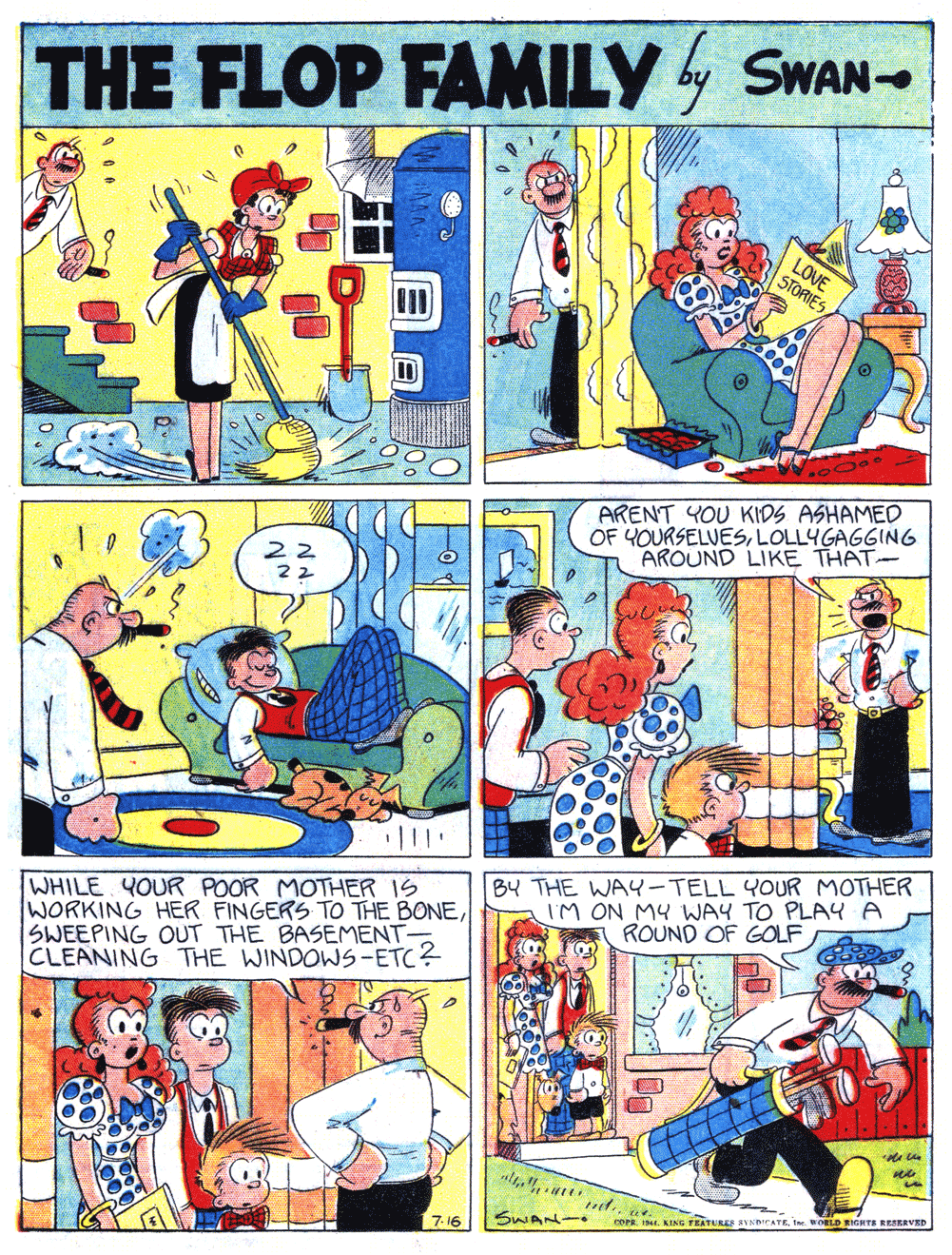 In the spring of 1944, King Features dropped the unsuccessful first try at a FLASH GORDON daily strip, and we lost the services of George Herriman. The decision was made to let KRAZY KAT end with him. We needed to add some new daily series, and a weekday version of THE FLOP FAMILY was one of them, as was JOHNNY HAZARD. 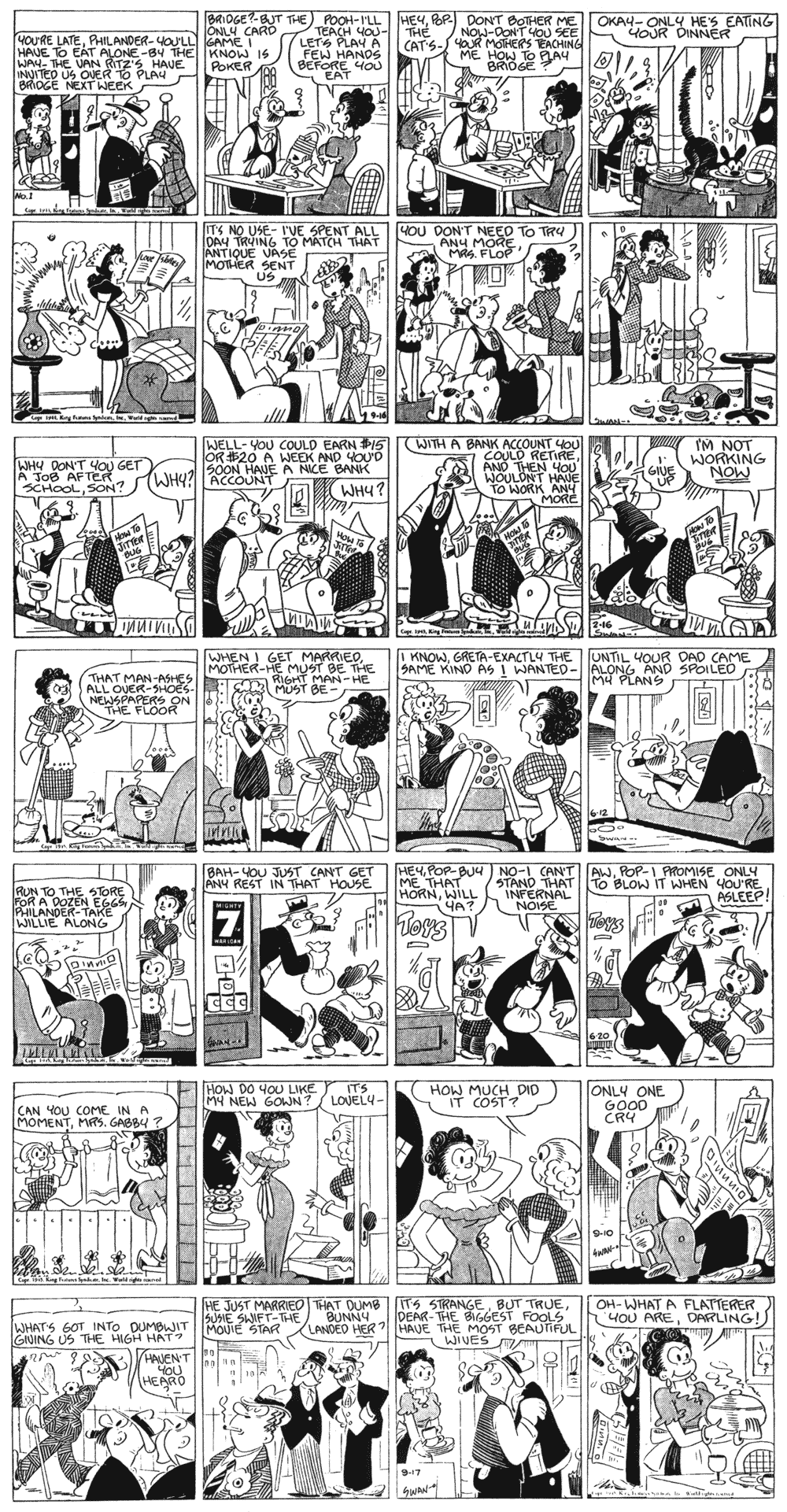 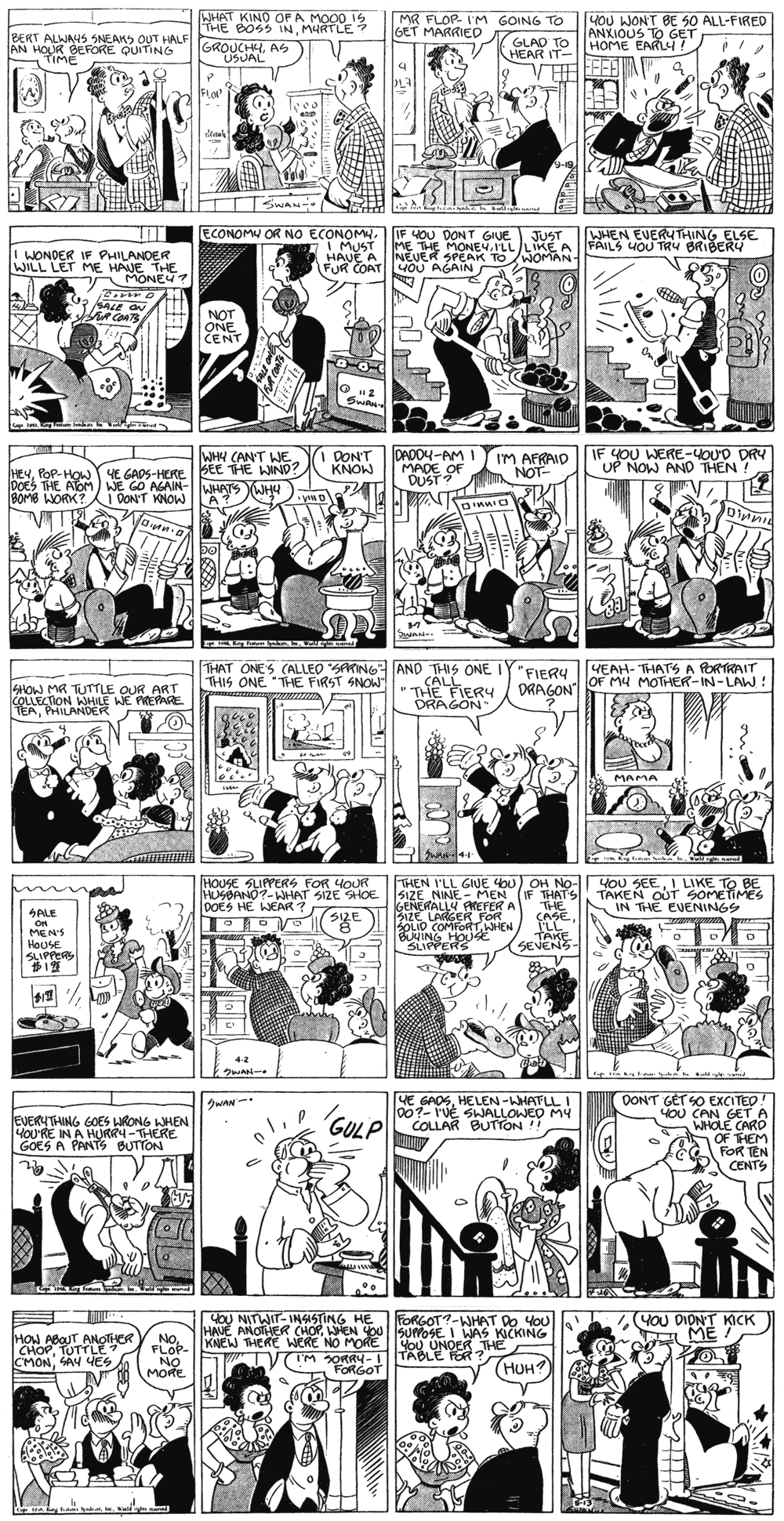 So, the Flops were added. On Sunday, the strip was still offered only in odd sizes for many years, usually in half-tabloid. Many who are old enough to remember The New York Mirror will recall its appearance there. The Sunday strip ended in 1966.

Though long-lived and occasionally funny, THE FLOP FAMILY never rose to greatness because it lacked what might be called “heart.” In all that time, the Flops never showed anything but a greedy, bitter attitude toward one another. Other constantly fighting comic couples of the time, such as Maggie and Jiggs or Mr. and Mrs. Mutt, still could show they did actually care for one another now and then. But, the Flops just endlessly seemed to be at war.

Some examples from the final year show Swanson’s disintegrating style.

The gags are old vaudeville stuff, tried-and-true battle-of-the-sexes material. Maybe it was fresh once, but Swanson never changed a whit. He kept on recycling the same gags, with the Flops living in a generic time anywhere from the 1920’s to the 1950′s. Even their wardrobe didn’t change…into the 1980’s, there is still expensive millinery bills that run as high as $30 dollars. Mr. Flop is still shoveling coal in his cellar. Give him his due, though, Mr. Swanson himself was no flop, his series lasted 38 years. He died on 1 December 1981,  and the strip’s final entry was 2 January 1982. 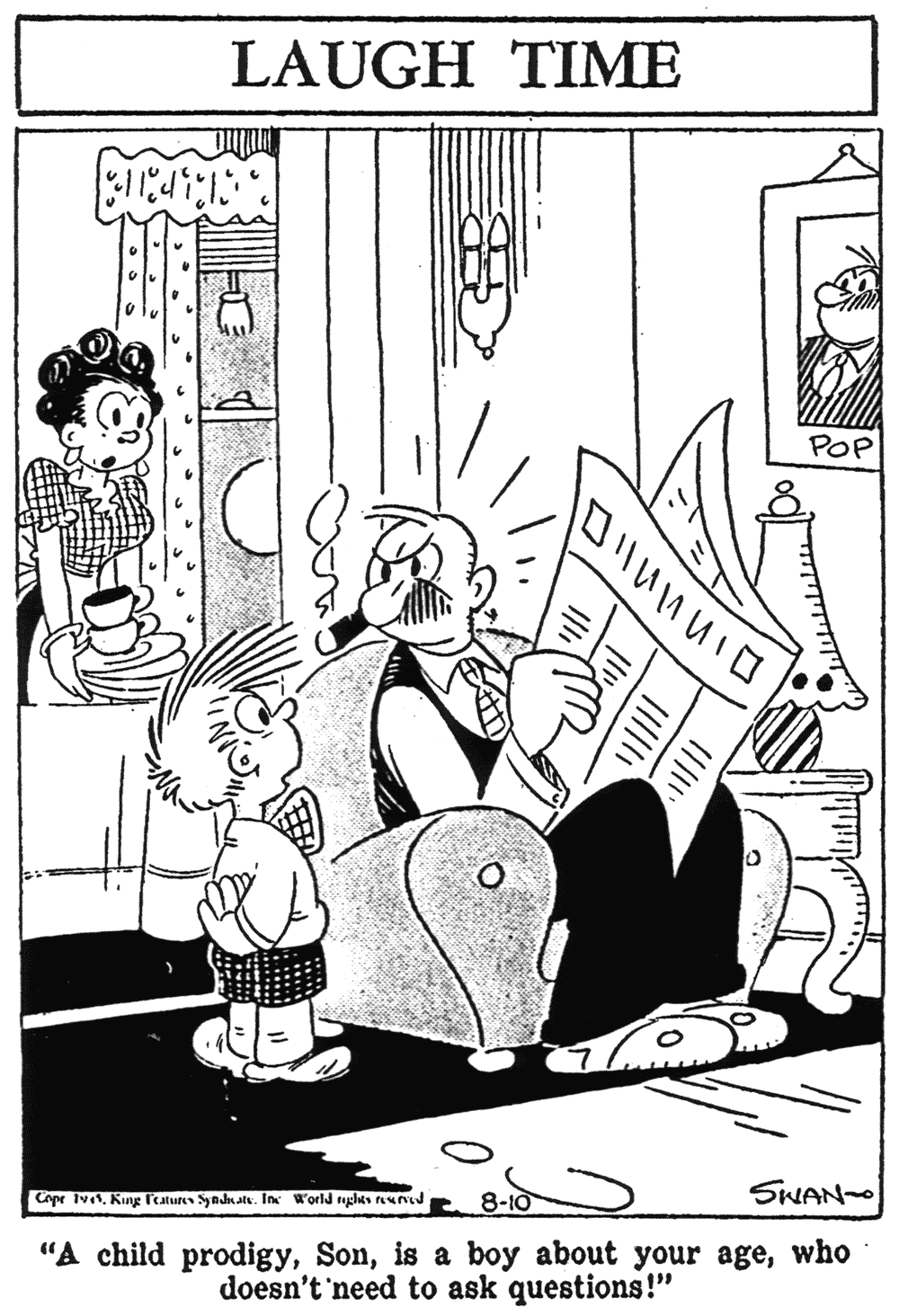 The Flops made a few guest appearances in this  panel anthology.(10 August 1945)

The Jiggs’ “Laugh Month” promotion really meant nothing more than a little extra exposure for BRINGING UP FATHER. It seems to have extended no further than this ad running in newspapers that took the strip.  There weren’t even any other characters involved. Of course, January 1926 was just another chuckle-filled month for Jiggs and his readers. We’ll look at George McManus himself soon.