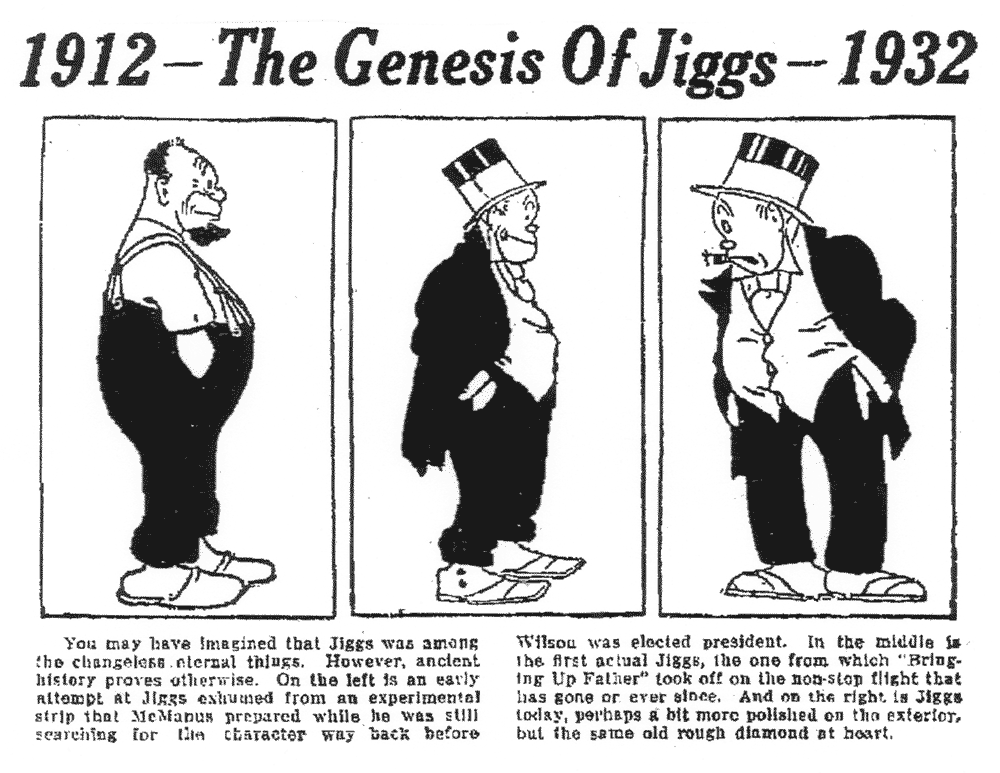 Happy New Year, fans! Today is the 100th Anniversary of one of comics’ greatest titles, the immortal George McManus’ BRINGING UP FATHER. The strip started in only a few newspapers outside of the Hearst chain, but it really struck the public’s sense of humor. Within only a few years, the strip led to comic books, silent and talkie movies, and even a radio series. 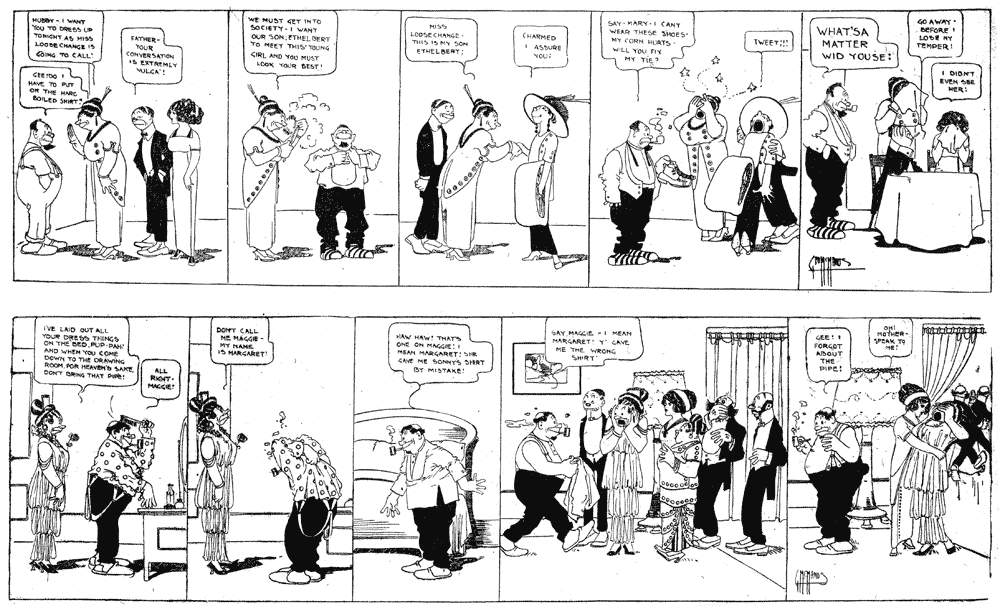 The strip was inspired by a play that McManus had seen as a boy in St. Louis back in the 1890’s. It was a performance of “THE RISING GENERATION,” with a plot line about a poor laborer who suddenly becomes wealthy, and how his family handles it. Soon, BRINGING UP FATHER had become a favorite here in America, and at one time, the top-selling strip in the world. 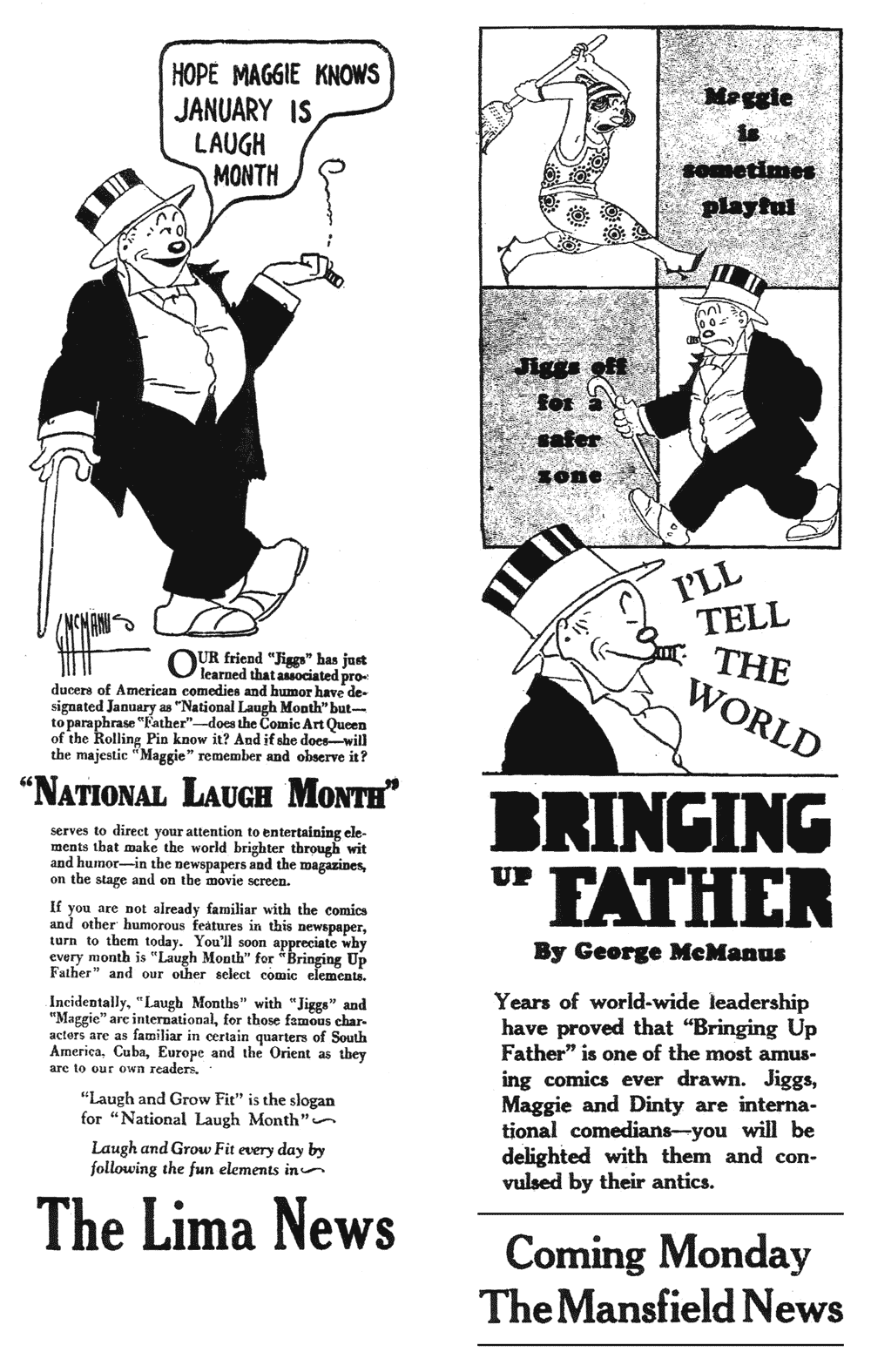 Some 1920’s promo spots. I don’t know if “Laugh Month” might commit you to anything, so if Jiggs asks you to sign up, read the fine print first.

In January 1932, a special BRINGING UP FATHER publicity rush was started. Though the strip was only 19 years old, the strip celebrated Jiggs and Maggie’s 20th wedding anniversary. The festive day was designated on the 23rd of that month, which by chance was also McManus’s 48th birthday.

Oddly, in the news copy that the syndicate provided back then, it insisted that the strip itself was now 20 years old, (McManus actually hadn’t even started working for Hearst until August, 1912) (See the Archivist blog of 29 August 2012) and repeatedly misidentified the first strip as well.

Anyway, McManus had a round of banquets and publicity…deservedly so, as reported in this article from the Salt Lake Tribune of 25 January 1932. The Veep even showed up!

The picture accompanying the story was actually another part of the promotion, at least for some newspapers, (apparently NOT including the Salt Lake Tribune) where, if you too were celebrating your china anniversary, a color reproduction of this art, personalized and signed by McManus, could be yours. This may well have inspired the posters we offered in the 1970’s, like we saw here last week, but, maybe not.

The line in the cartoon “Maggie and Jiggs” would be taken by your name. Most of the time, when this picture was used in the newspapers, that line, the color border, and the shine on the ring were absent.

Pull up a plate of corned beef and cabbage, because we’ll see a lot more of Jiggs, Maggie and George through the year.