Ask the Archivist: THE PHANTOM Wedding

To finish out the year, we close with the 35th anniversary of the marriage of our hero, The Phantom to Diana Palmer.

In the story, the two had known each other since childhood. This long-awaited day was brought about after the strip itself was 41 years old. The ceremony was attended by all of the Phantom’s best friends, including Colonel Worobu of the Jungle Patrol, Doctor Axel, the chiefs of many tribes, Eastern  princes, Hzz, the man- monster, and in a rare crossover from Lee Falk’s other great strip, Mandrake the Magician.

It was a civil marriage, presided over by the leaders of the two neighboring emerging African nations: President Goranda of Ivory-Lana, and President Luaga of Bangalla.

For a wedding ring, The Phantom presented Diana with one carved out of a single huge diamond, one that previously had been worn by the bride of Roman emperor, Augustus.

“Phantom does not do big things on the  cheap.” That’s an old jungle saying that I just made up.

Mr. Falk himself was married earlier that year to Elizabeth Moxley, and that’s what inspired the plunge for Mr. Walker. 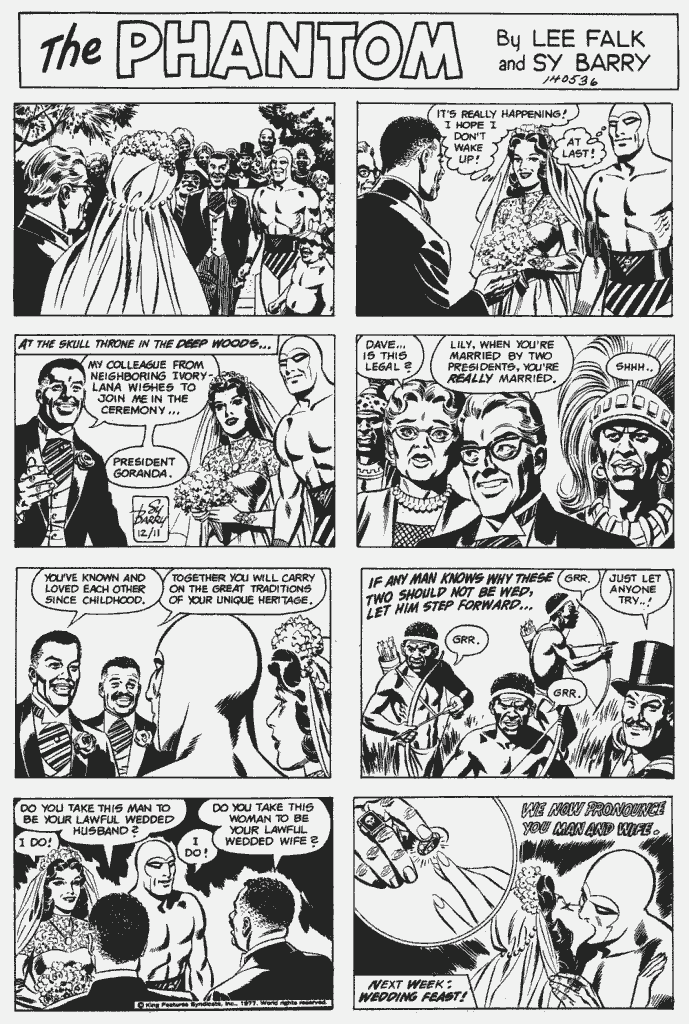 To add to this, I have something that PHANTOM fans will find somewhere between incredibly fascinating and stupefyingly boring, but here’s the only chance I’ll ever have to make use of it: THE PHANTOM wedding poster (AD).

In 1975, on the retirement of Hal Foster from PRINCE VALIANT, we put out a special commemorative poster. There were two versions: a regular poster, and the more expensive one, which was autographed by Hal Foster and numbered like art prints.

The idea worked out well, so the same thing was tried with THE PHANTOM wedding poster, with or without signatures of Falk and cartoonist Sy Barry. A campaign for the poster was devised by the Bridgewater, New Jersey  firm, “Advertising Sciences, Inc.”

Somehow, the original materials for the ads were saved. 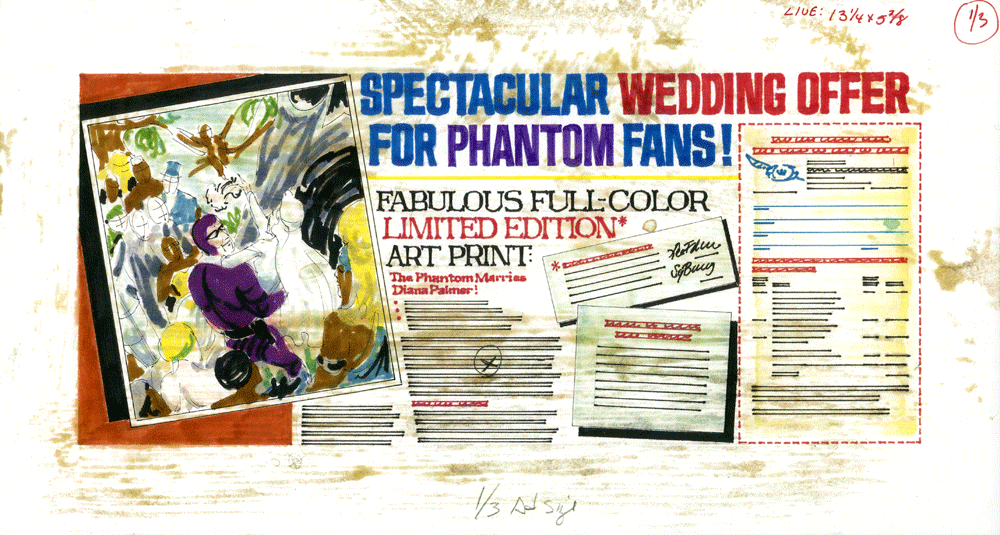 This is the concept art, made by the agency’s staff. It was created with felt tip pens and drafting tools. The greasy smears are from the glue that held it on a piece of art board. 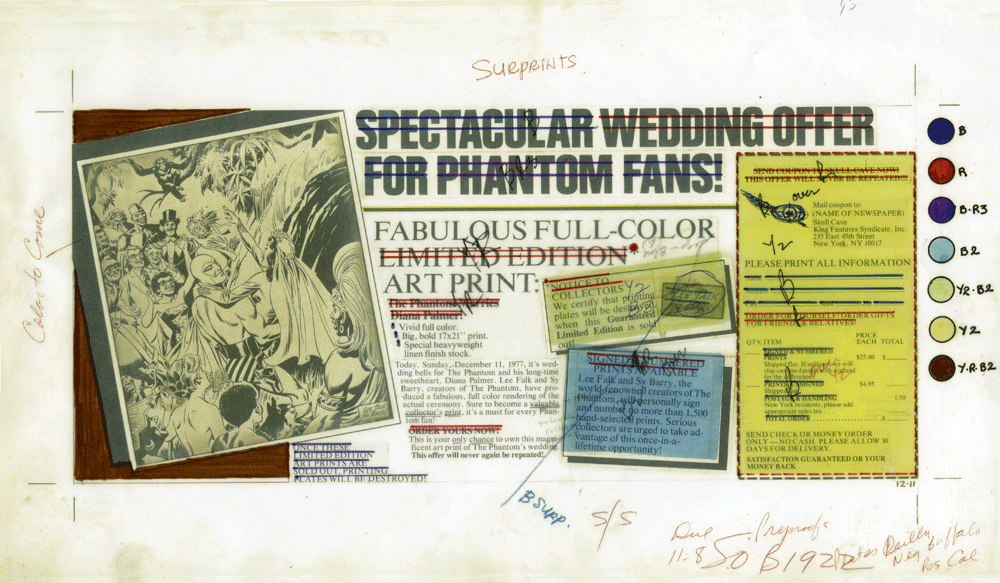 A picture of the black and white line art of the poster and the close-up of the signatures were made on “Velox,” an inexpensive, quick drying photostat stock, and cut to size in this mock-up. The type was printed on coated stock, and all arranged to suit the ad, much similar in look to the concept. The colors and production notations are actually on tracing paper, known as a color indication sheet, taped on one side, to protect the original. The Velox, typically, has turned dark and greenish. It was only intended to last as long as the project. 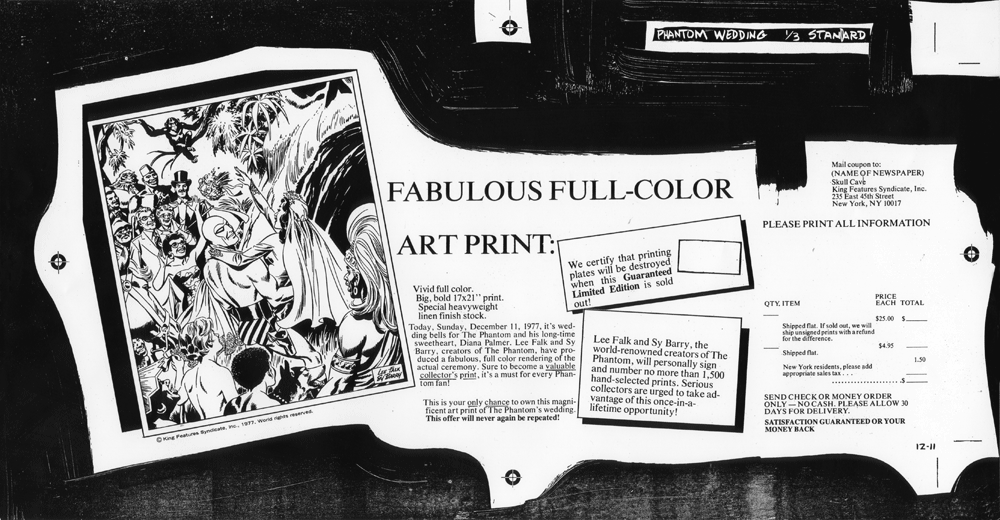 Ahead of the print date (11 December 1977) the papers were sent slick paper proofs of the ad, consisting of two pages for the colors to be used, and one was just the black line art and type. That page,(this one) was saved. This was known in the vernacular as a “mechanical,” with the small registration marks to line up on all sheets to keep the colors perfectly aligned. This was intended for the client’s comic section, at 1/3 Standard page size, but at least two other sizes were issued. 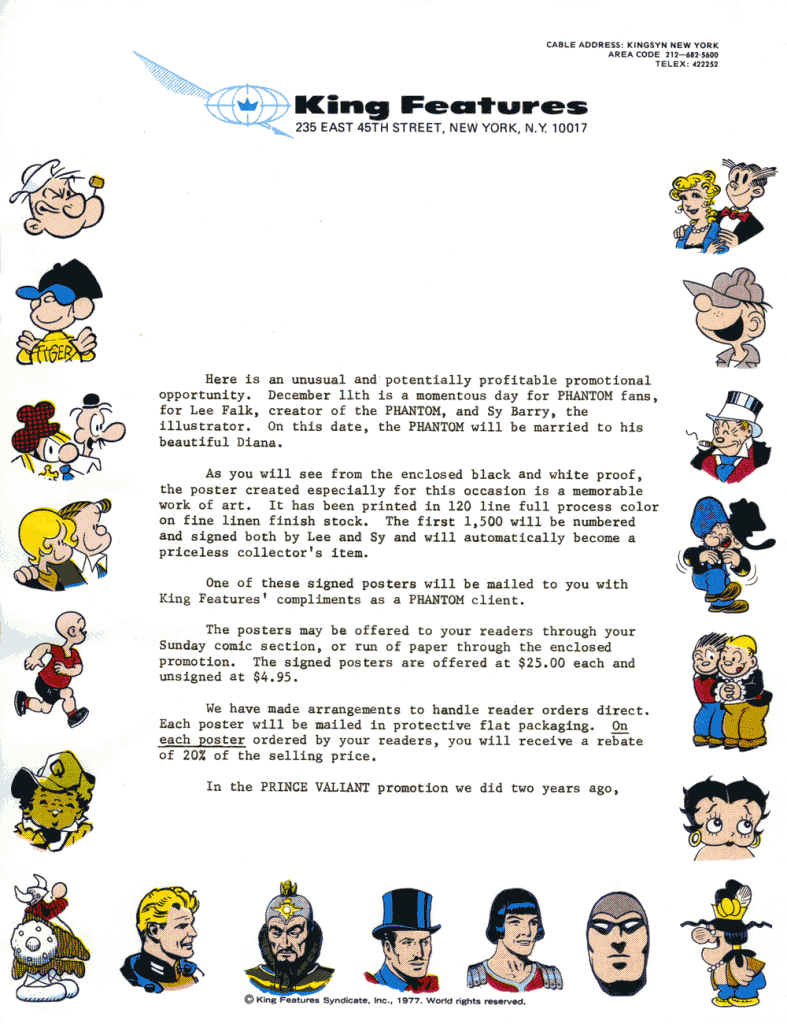 This is part of the pitch letter to convince THE PHANTOM client newspapers to participate in the poster event. This was our stock letterhead in 1977, showing some of the star characters of that era. 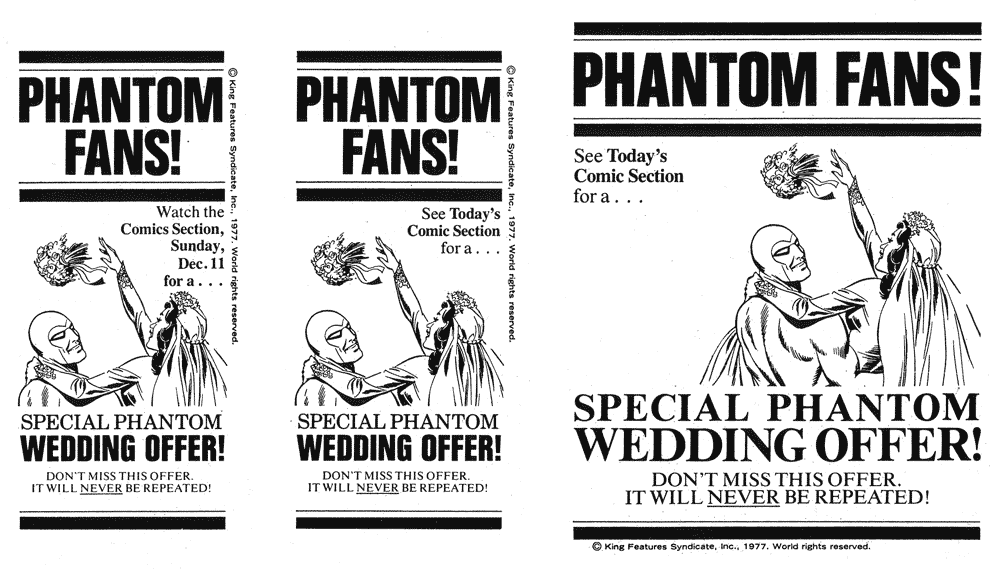 Some of the one and two column ads (“teasers”) that a client newspaper would use in the week before and on the day of the wedding and ad.

I don’t know if this was a really successful promotion, as we never did another offer like it. Today, I’d guess the signed ones might be valuable, especially to devoted PHANTOM buffs, but I couldn’t say exactly how much. By the way, all offers and addresses seen in the above post have expired long ago.

Well, we’ve had another year of fun and King Features Syndicate’s history at this site, and we’ll start a fresh one next week. In fact, there’s nothing I can do to prevent it. So until then, my very best wishes for a happy new year.