Yes, I have a toaster fetish 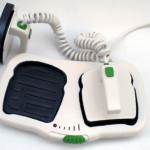 I love toasters. I often use them in the strip. I think this fascination started when Anne and I were first married. She would go to garage sales and come home with old, used small appliances.

We would use them continuously until they wore out, broke, or caught on fire. When they stopped working, they would go to the basement to the growing pile of discarded but really cool small appliances. When my oldest son was young, I let him take them apart and build whatever he wanted out of them. This is where I would eventually get the idea to have Edison build inventions with old toasters.

Toasters are mechanical engineering masterpieces. They can be beautiful to look at, are relatively inexpensive, and best of all, they make toast.

Starting today, I will start featuring my “Toaster of the Month” This month’s toaster is a defibrillator toaster from www.geeky-gadgets.com. I absolutely must have one of these.