In 1957, King Features launched a funny strip about a lovable millionaire who acted like a carefree boy in a man’s body — sort of an American equivalent of THE LITTLE KING, though this time a confirmed bachelor. The strip was MR. ABERNATHY by Ralston Jones and Frank Ridgeway, which premiered on 14 October 1957. A Sunday strip was later added from 1959 to 1986. 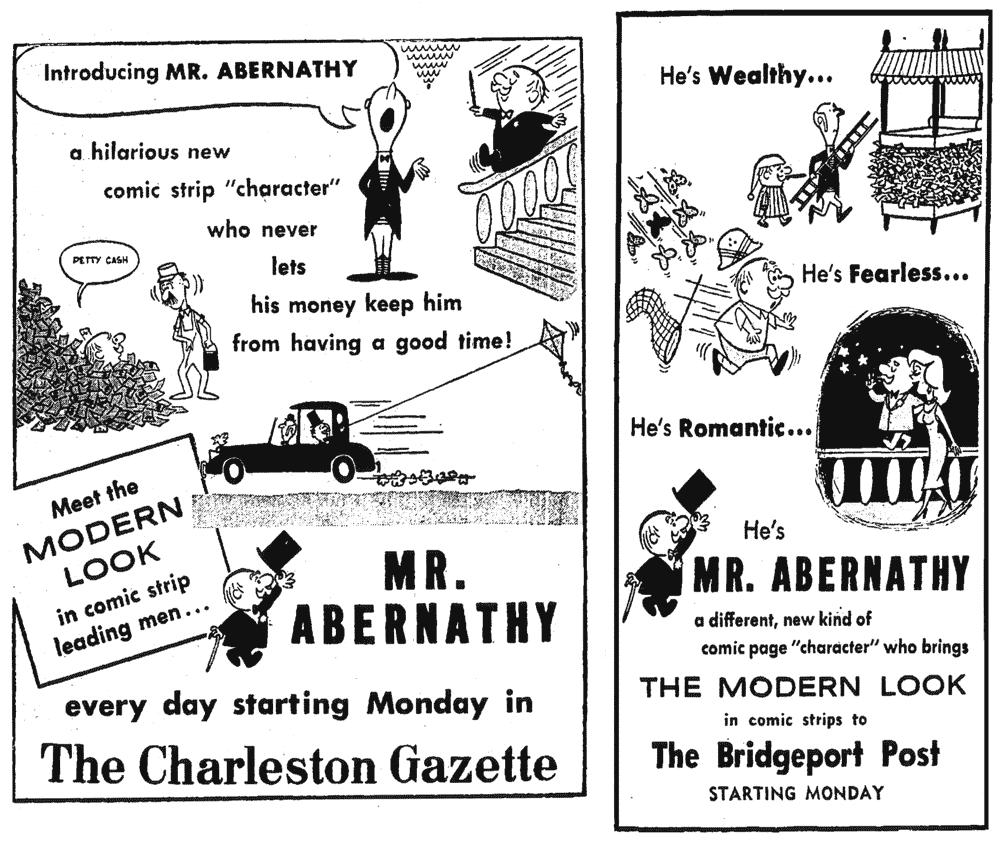 Mr. Abernathy owned a large company and had an office, but most of his time was spent in pursuit of pleasure. Games, pets and parties took up a lot of his time, but above all else, pretty girls were his obsession. He was very short, and being  bald and white- mustached might indicate age, but not always wisdom. Though his fabulous wealth permitted him to maintain the lifestyle of a young playboy-about-town, he wasn’t that much of a catch to the girls. Often, the gags center on his rejections. Most notably, the brunette beauty, Yum Yum O’Day, who rebuffed him at every turn, though Abernathy never stopped trying.

There were many characters in the strip. Some of the most memorable were Dudley, the long-suffering butler; Admiral Asterbloom, the pompous bore who hangs out with Abernathy; Jonathan C. Profile, a conceited ham actor; his whiney nephew Rodney; Lady Veronica, a high society matron with weight problems; a notoriously bad driver, Van Dabbler; a beatnik painter, Jeremiah; an ineffective ghost; and beautiful but dumb Flossie, the world’s worst secretary.

His pets included: Monty the dog, Polly the parrot, Marsha the goldfish, and of course, Cuddles the elephant. 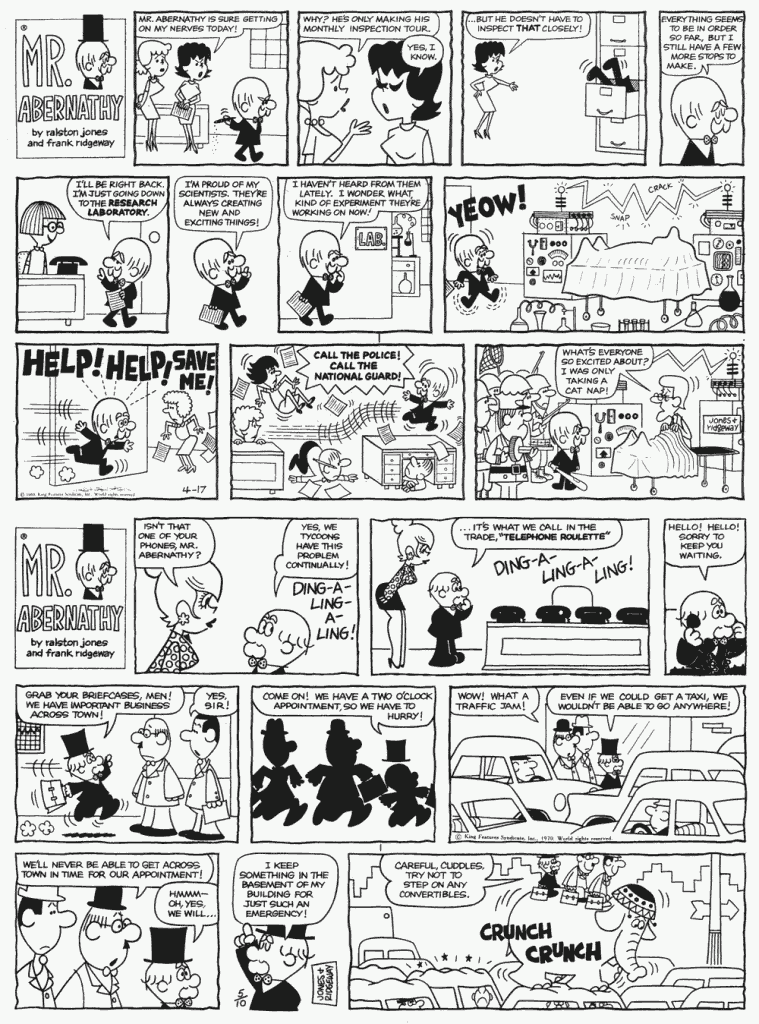 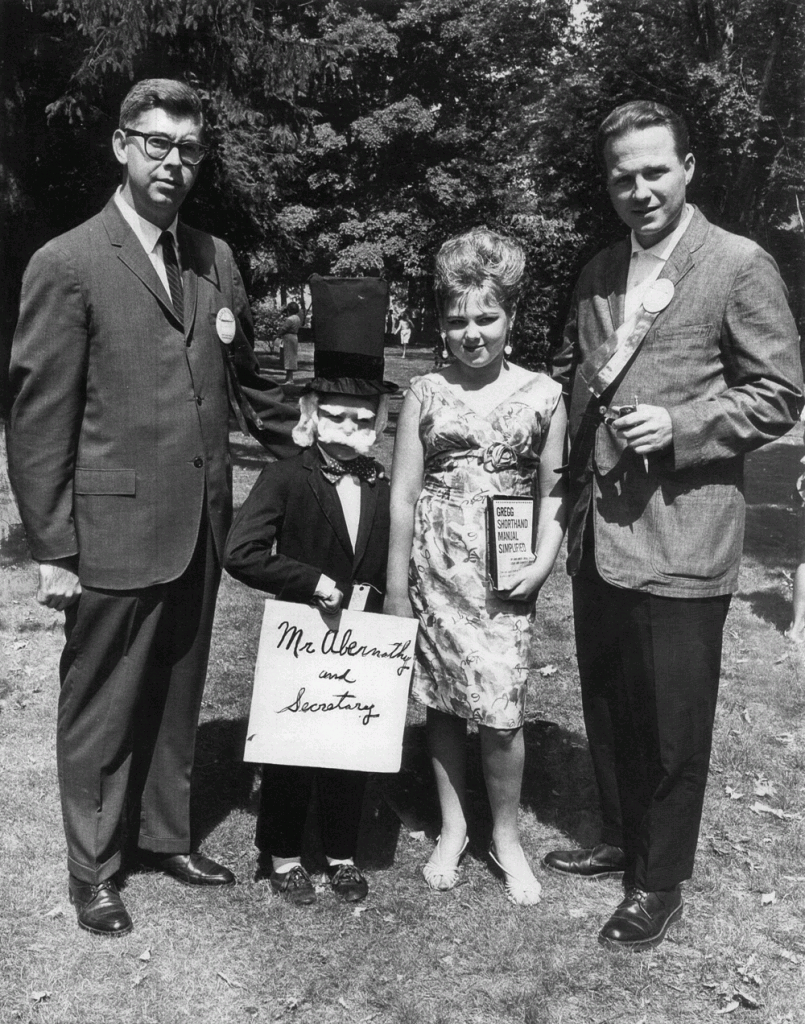 Frank Ridgeway (pictured left) and Ralston Jones (pictured right) encounter the real Mr. Abernathy and Flossie some time circa 1963. I have no further information as to what’s going on, or what their badges read. It’s tough when the snipe comes off an old news photo. (Author’s collection)

Abernathy’s creators parted ways in 1979. The artist, Ralston Jones, left eventually to do a short-lived effort over at NAS (North American Syndicate). called FULL HOUSE. Frank Ridgeway, until then the only writer, took over the cartooning duties too, with lesser aplomb. The strip, I think, suffered for it, and the client lists dwindled. At his death in 1994, KFS comics editor Jay Kennedy decided to keep it going in reruns. In 2003, the strip was retired for good.

Now on to reader comments:

I’ll do a page on THE AMBASSADOR next month. I would have here, but I have all the material for December already lined up. I will get  to it.

Actually you’re right in that both this year and 1923 had 12 September and 31 October fall on Wednesdays, and most of the rest of the two years correspond as well, but 2012’s leap year status changes January and February. The calendar that was used in 1923 was last used in 2007, and will be again in 2018. The calendar used in 2012  is infrequently deployed, only three times in the twentieth century, and won’t be recycled in this one until 2040.  Provided the Mayans and their calendar are wrong, of course.

We try to give you a look at some of the lesser known titles here. In more than a century of Hearst comics, there’s lots to see.

Well, no, we don’t have any of the Boston-only efforts of Schmidt and Sullivan. I’ll ask some of our collectors if they might help us out on that, because I think that would be a fine blog topic. Incidentally, they didn’t work on the Boston American, in 1934 they were with another Hearst weekday paper , the Boston Daily Record, a tabloid that many years later was merged with the American.

Next week, the oldest thing I’ve posted yet.

And it’ll have nothing to do with Mayans.