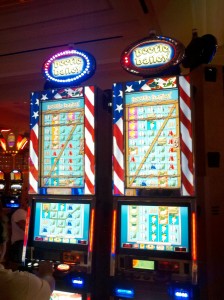 One of our roving reporters recently visited a popular Atlantic City casino with his family. What to his wondering eyes did appear but side-by-side slots, full of good cheer — and apparently, the winning combination as well. That’s right. Mort Walker’s classic comic strip character, Beetle Bailey, the laziest private in the army, turned out to be the inspiration for an entertaining evening and the luckiest talisman of all. For once, our reporter did not go home empty-handed.

Fresh from a recent joint exercise,  Beetle’s military buddy —  and sometimes opponent in the classic Army vs. Navy rivalry — Popeye the Sailor Man was also also spotted nearby with his own slot machine.

Both lucky slots are manufactured under license from King Features by Lightening Gaming. Founded in 2004, the company a leading software game developer for casinos and entertainment venues.