Ask the Archivist: A Century of George McManus

This blog marks the end of our first year, and by chance, a special treat for all you Edwardians. This week marks the centennial of one of King Features’ greatest talents, George McManus, joining the company.

Mr. McManus would go on to create the top-selling strip in the world for many years, BRINGING UP FATHER, in 1913. We’ll have several entries on that series for the 100th Anniversary next year, but in 1912, he already had a popular strip known as THE NEWLYWEDS.

The strip started out as a series in the Pulitzer organization, which was known as “Press Publishing Co.” in 1904. THE NEWLYWEDS were quite a single-minded pair of lovebirds. They were so oblivious to anything but each other. Mr. N usually walked or crashed into something. Since you can’t stay a newlywed forever, (even if you’re stuck with that name), they had a baby boy named Snookums in 1907.

He was a typical McManus creation—a button-nosed, cipher-eyed, bat-eared little goblin. But then again, his father was no Greek god either. However, Mrs. Newlywed was one of McManus’ finer beauties, with her famous luxuriously drawn tresses.

The strip became known as THE NEWLYWEDS AND THEIR BABY as Snookums became the weekly catalyst for his father’s misadventures. The familial devotion to “Snook” was all-consuming…. If there was anything that could be done to keep him from crying, they would do it—no matter how much money, pain or humiliation it cost.

When McManus began to work for Hearst, he was able to bring his little cartoon family with him. However, Press Publishing retained the trademark and kept right on printing THE NEWLYWEDS AND THEIR BABY strip, but instead drawn by Albert Carmichael. McManus had to re-christen his version “THEIR ONLY CHILD,” which lasted in syndication until 1916. 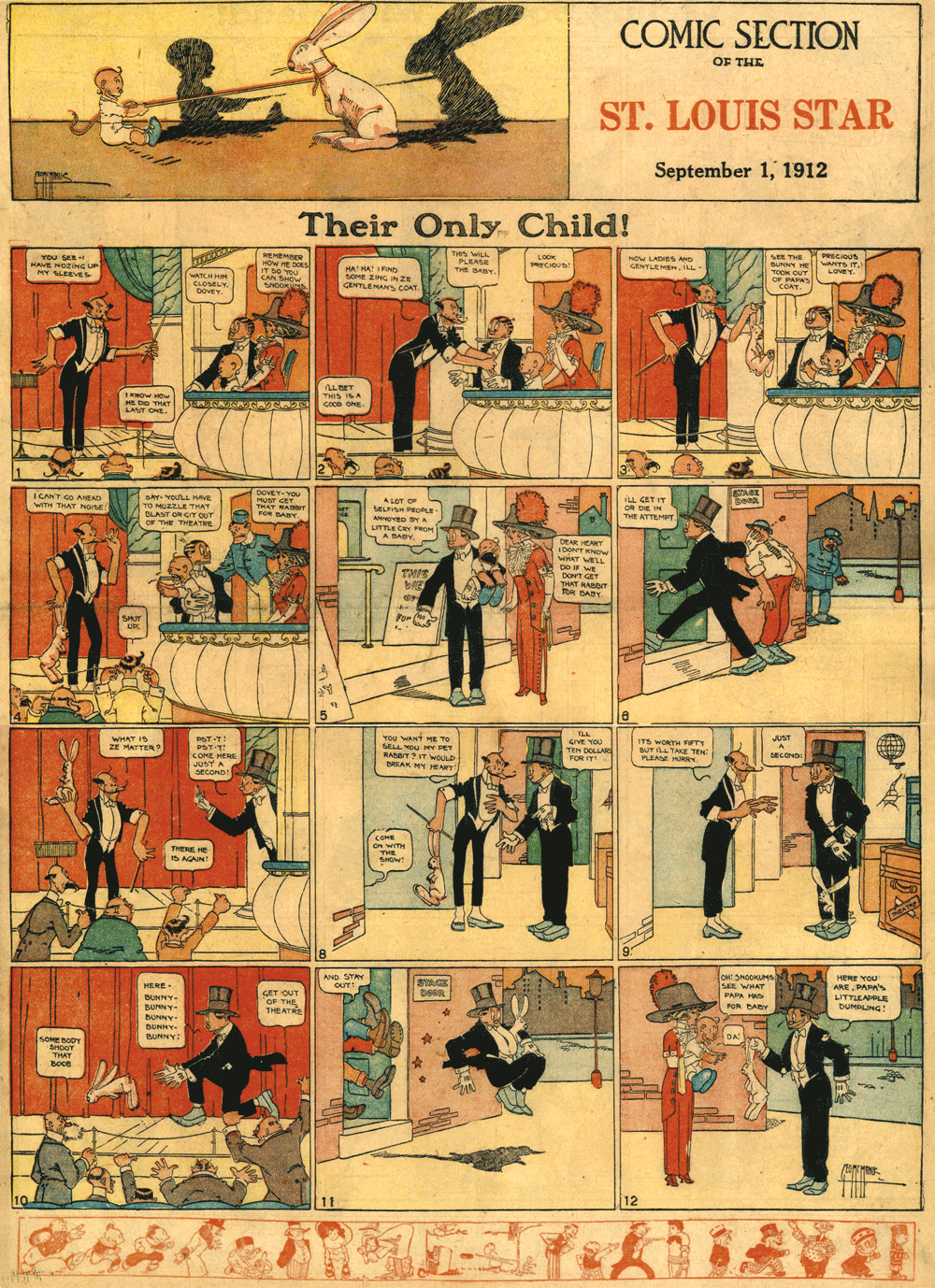 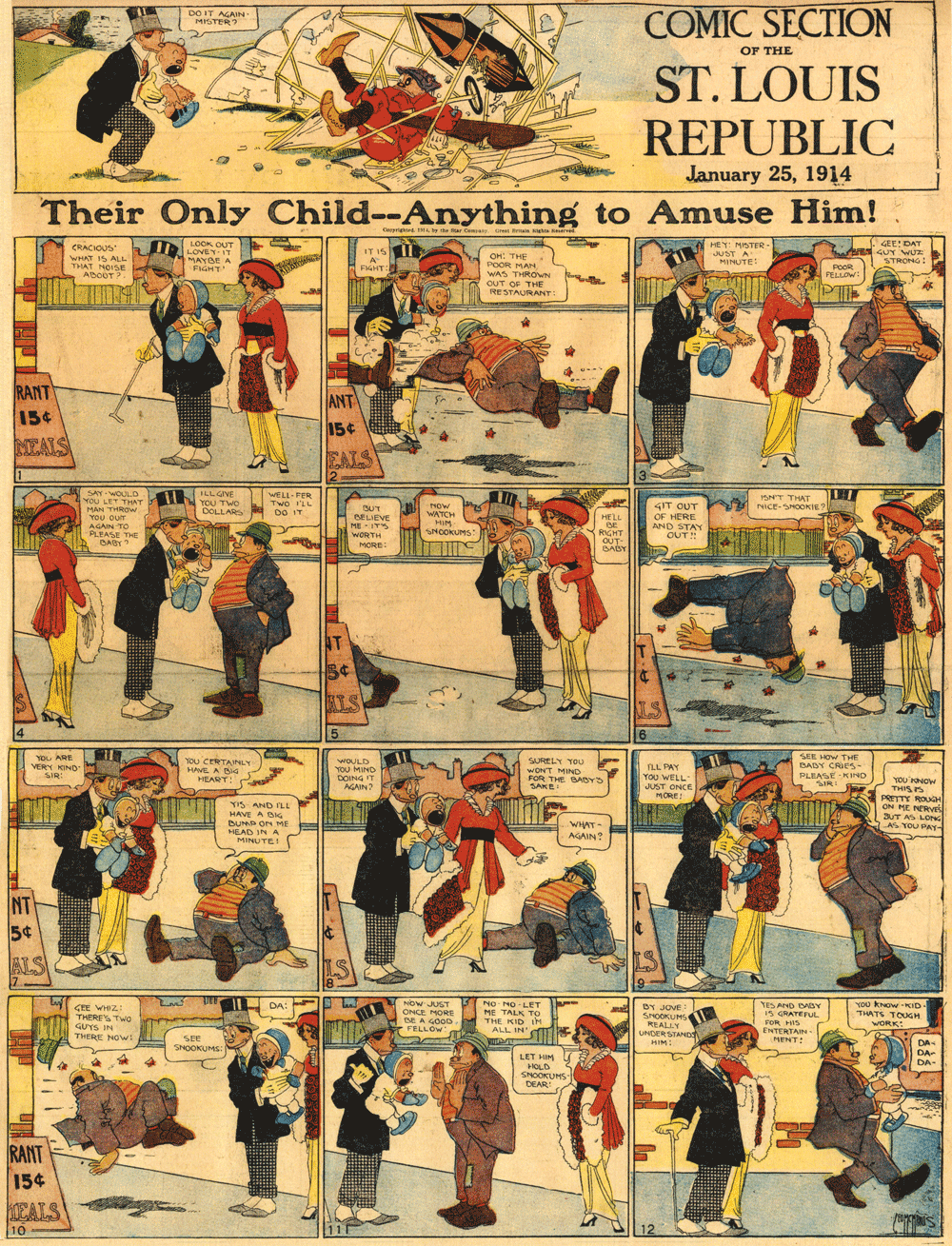 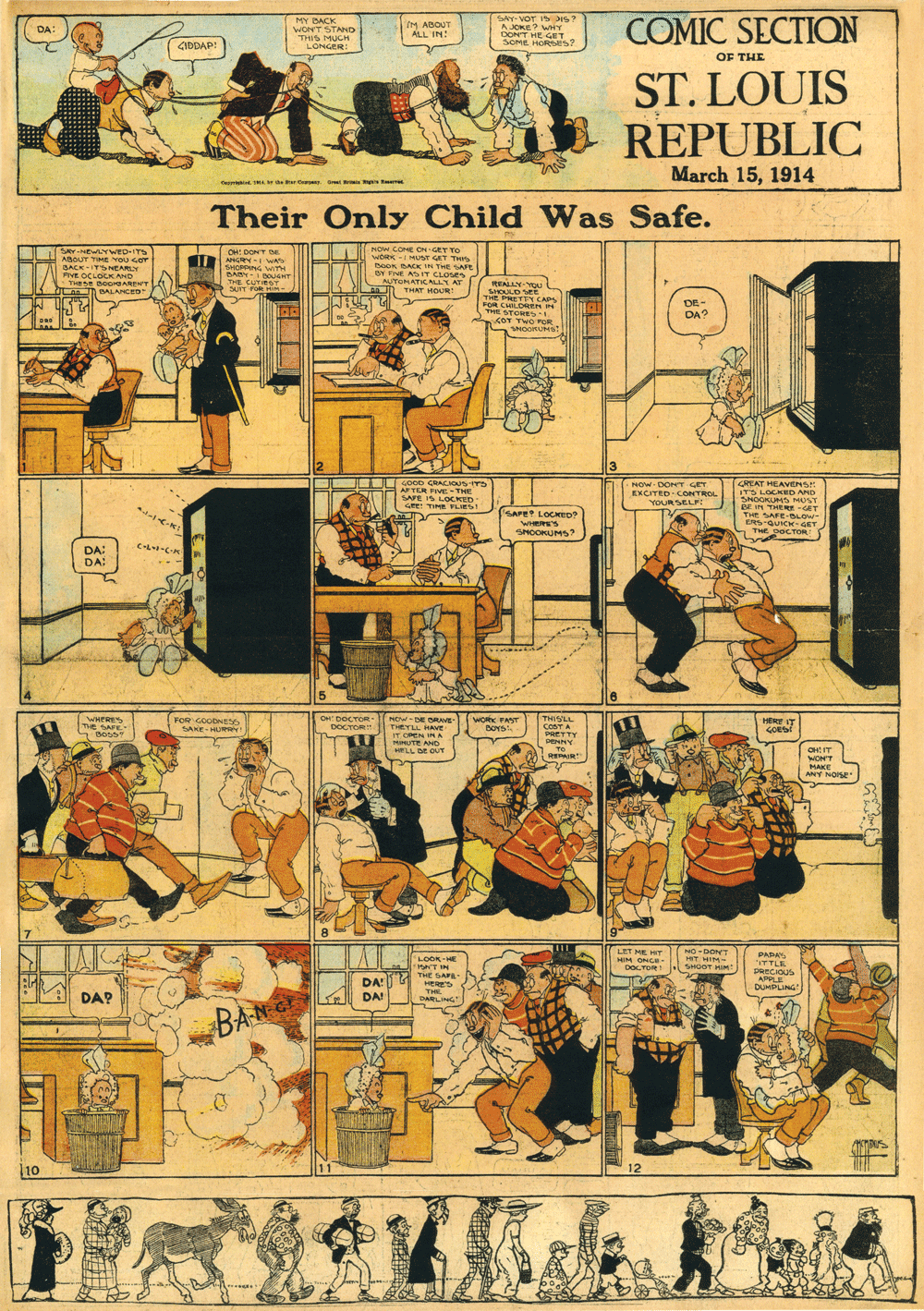 Snookums visits his Daddy’s office. You may notice these are from two St. Louis papers:
The Republic (where, by chance, McManus began his career in the 1890’s)
got the Hearst section away from The Star in February 1913. 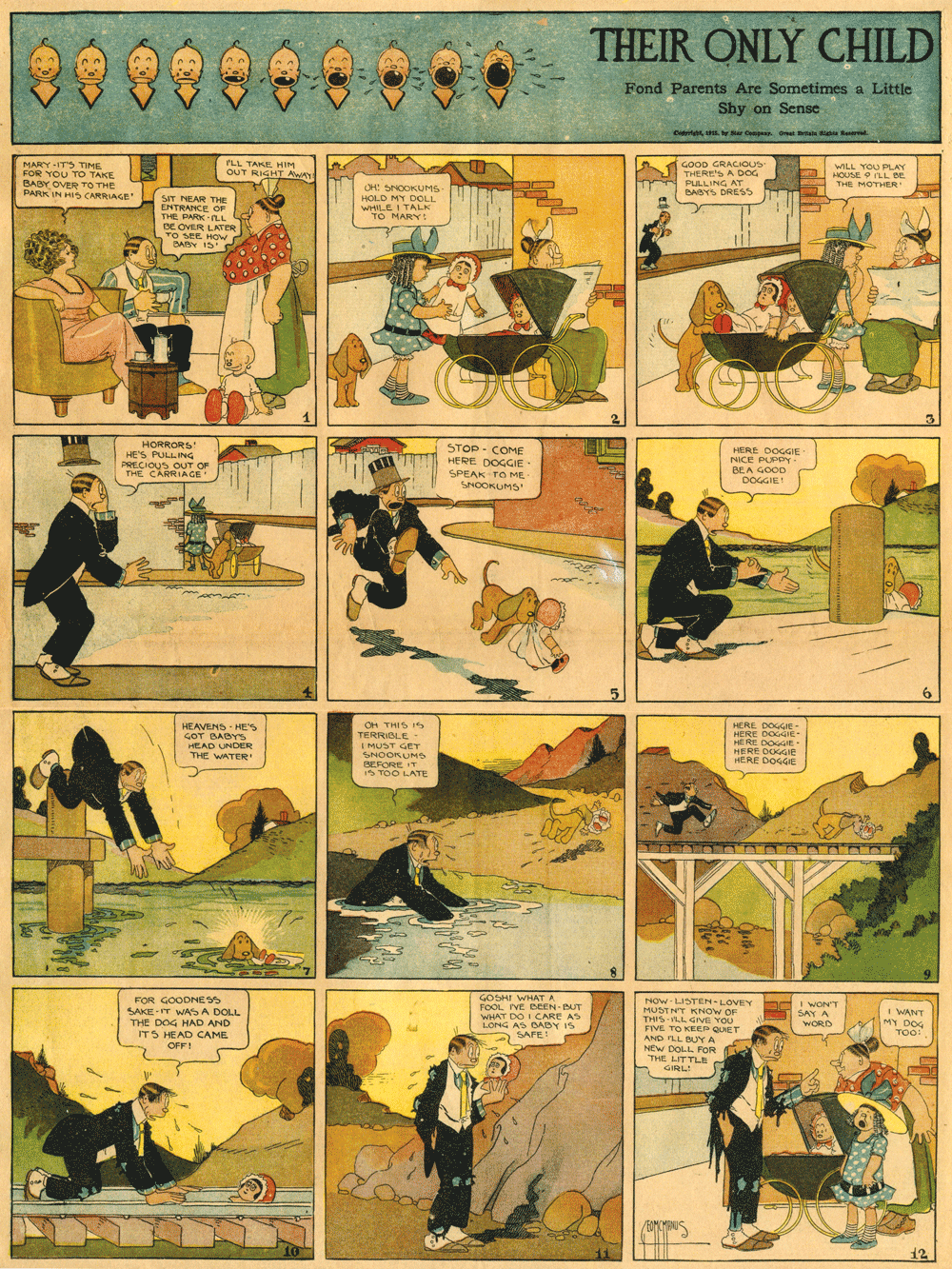 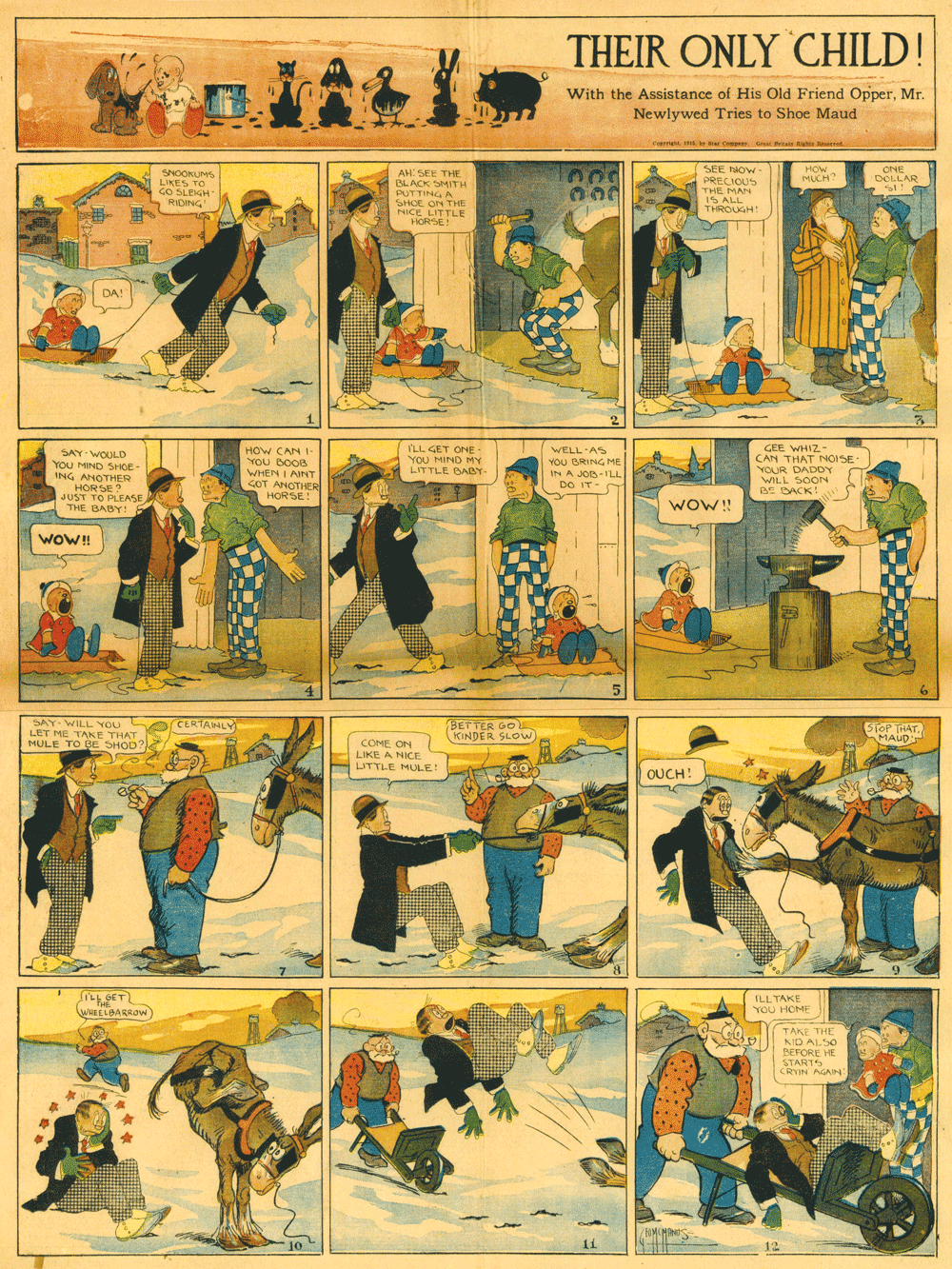 On December 5, 1915, Fred Opper’s Si and Maud the Mule guest starred,
but the art wasn’t supplied by him.

An updated version of this strip, SNOOKUMS was created by McManus that ran from 1944 to 1956. We’ll take a look at that version sometime soon.

Have a safe and sane Labor Day, everyone.