Recently, I was going through some 1940s and 1950s Sunday comics and found some unusual items: rarely seen earlier works of the great Dik Browne. Before he was a cartoonist, he was in the world of “fake comics,” that is, advertisements that ran in the comics section and were often done up to look like real comics.

Advertising in  the comics section goes as far back as the 1890s, and though there were some oddities along the way, ad comics really took off in the 1930s. Often the bane of readers and, later, collectors, some of these ads even had their own series that were often drawn by top cartoonists, including “OL’ JUDGE ROBBINS” by Nick Afonsky selling Prince Albert Pipe Tobacco, or the evil  “MR. COFFEE NERVES” for Postum by Milton Caniff and Noel Sickles, or bumbling Pepsi-Cola cops “PEPSI AND PETE” by Rube Goldberg.

When Dik Browne left the Army after World War Two, he joined the famed New York ad agency Johnstone and Cushing, which specialized in cartoon-based ad campaigns. Dik did several series there, one of which, in 1954 led Mort Walker to choose him as the cartoonist in his upcoming HI & LOIS project.

Here is a sample of some of Dik’s ads: 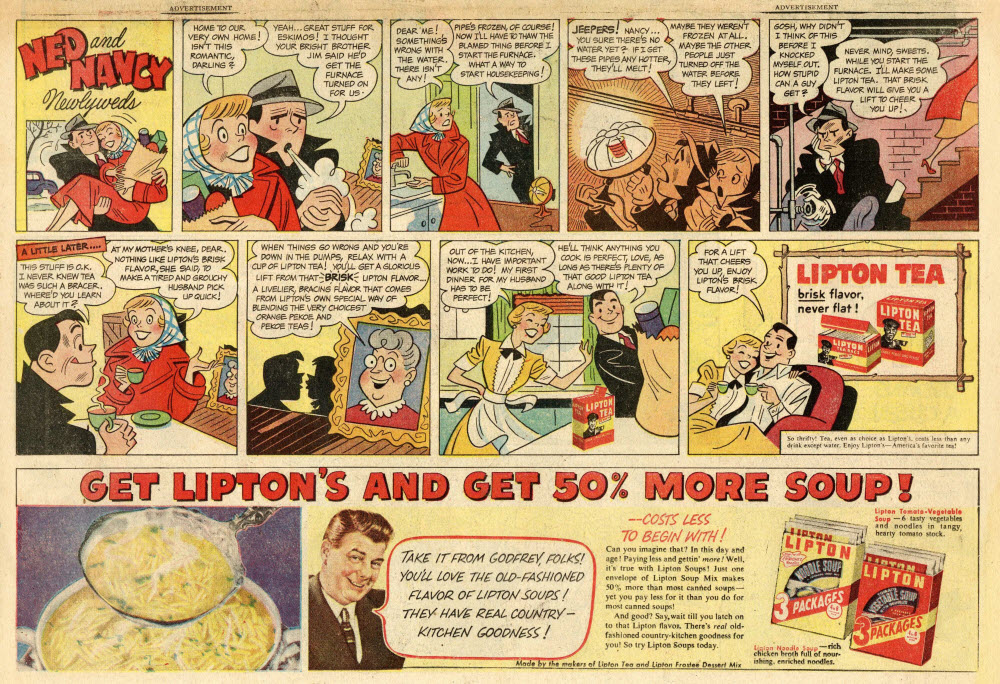 Arthur Godfrey lends a hand in this Lipton pitch. (4 February 1951)

Finally, I hope you can stand yet another look at Mr. Hatlo’s creations. It is the first Sunday of THEY’LL DO IT EVERY TIME. I didn’t realize it until going through some wartime sections of the Philadelphia Inquirer that we had offered this title then. It’s date of origin is July 4, 1943, or at least, it was run that day. (Notice it says “No.1” at the bottom margin). 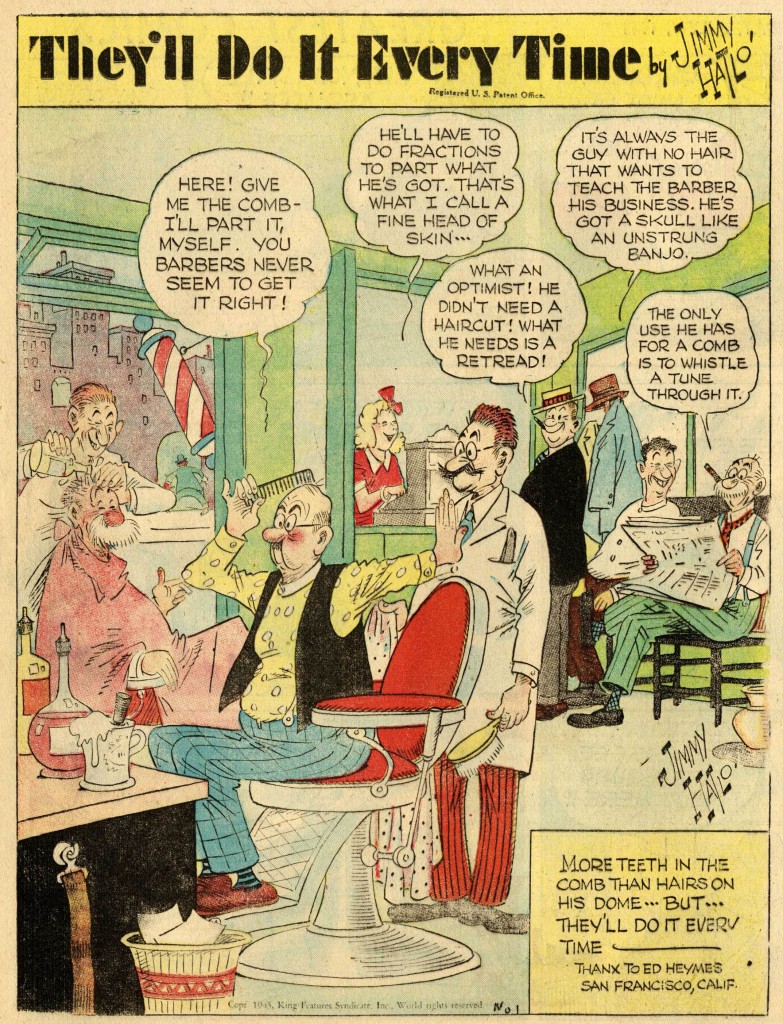 It’s in a quarter page size. The other features included a half page RIGHT AROUND HOME and a quarter page CUTIES panel. Earlier, a FLOP FAMILY quarter was in the mix. At that time, the Philadelphia Inquirer was not in the Hearst chain, but it was (and still is) a longtime client. I’ll venture a theory that this would be available primarily to clients, the fourth page size was made to be able to cut out to accommodate ads.

My records say that that Independence Day was supposed to be the start date of LITTLE IODINE, yet our files have episodes beginning on 5 September, with one undated (though copyrighted in 1943) strip bearing a logo different from all the other 1943 strips.  It too, is in this quarter page format, which I guess could be a full tab  if needed. I don’t have a full Philadelphia Inquirer file after July 4, but I have an early August one, with another THEY’LL DO IT EVERY TIME panel, as well as a September one with LITTLE IODINE.

If the undated LITTLE IODINE is perhaps August 29, that may in fact be the first one. The T-DIET Sunday panel may have turned into the Iodine Sunday, with the Sunday TDIET we all remember (1/2 page) being relaunched on May 8, 1949. Anybody have an idea on this?