Ask the Archivist: The Code of Comics

Today, I will follow up on the topic of censorship and self-censorship. It features our point of view on what comics are about. I thought you might like to peruse this excerpt from a 1946 short essay written by Bradley Kelly (1894-1969), who was King Features’ vice president and top comics editor.

“At King Features, we have a ‘Code of the Comics.’ No blood, no torture, no horror, no controversial subjects such as religion, politics and race. Above all is the important matter of good taste. The comics must be clean. No suggestive posturing and no indecent costumes. The figures must be natural and lifelike. In other words, BLONDIE is the daily doings in humorous form of a normal American family.

“This is the perfect comic, appealing to all ‘children’ 8 to 80. But the term ‘Comics’ is now used to include adventure features as well as the ‘funnies.’  The adventure comic is a comparative newcomer to the field of newspaper-illustrated strips.

“The growth of adventure features and so-called comic books has been phenomenal.   Obviously with such a big output, there is bound to be some bad with the good, as is true in every realm of entertainment.  Parents can be a factor in developing good taste and sound judgment.  In the main, newspaper adventure strips have constructive messages. There is punishment for violation of the moral code.

“While these adventure features are thoroughly realistic, none of them can equal the violence and ruthlessness of true life.  Can you imagine a daily strip portraying the news stories on the front pages of the newspapers?

“Recently, for example, an atom bomb was dropped in Bikini.  Thousands of live animals were used as guinea pigs in this death-dealing experiment.  It is a violation of our ‘Code of the Comics’ even to depict a child twisting a cat’s tail.  Today, every child in the country knows about Bikini.   If news of real life is not detrimental, certainly wholesome comics which extol the common virtues, which represent real American folklore—which are our chief American contribution to world culture—certainly the comics must be definitely helpful to the development of children.”

Standards, of course, change through the years, but comics have more or less stayed as squeaky clean as possible, because offending newspaper consumers is hardly good business practice.

I enclose an example of how a syndicate, in this case the defunct Field Newspaper Syndicate, will bend over backward to avoid ruffling the feathers of readers by giving the client paper a choice. I’m showing the original offering from the proof sheet of this DENNIS THE MENACE from 1982 and the replacement, which was sent out separately for more sensitive editors. 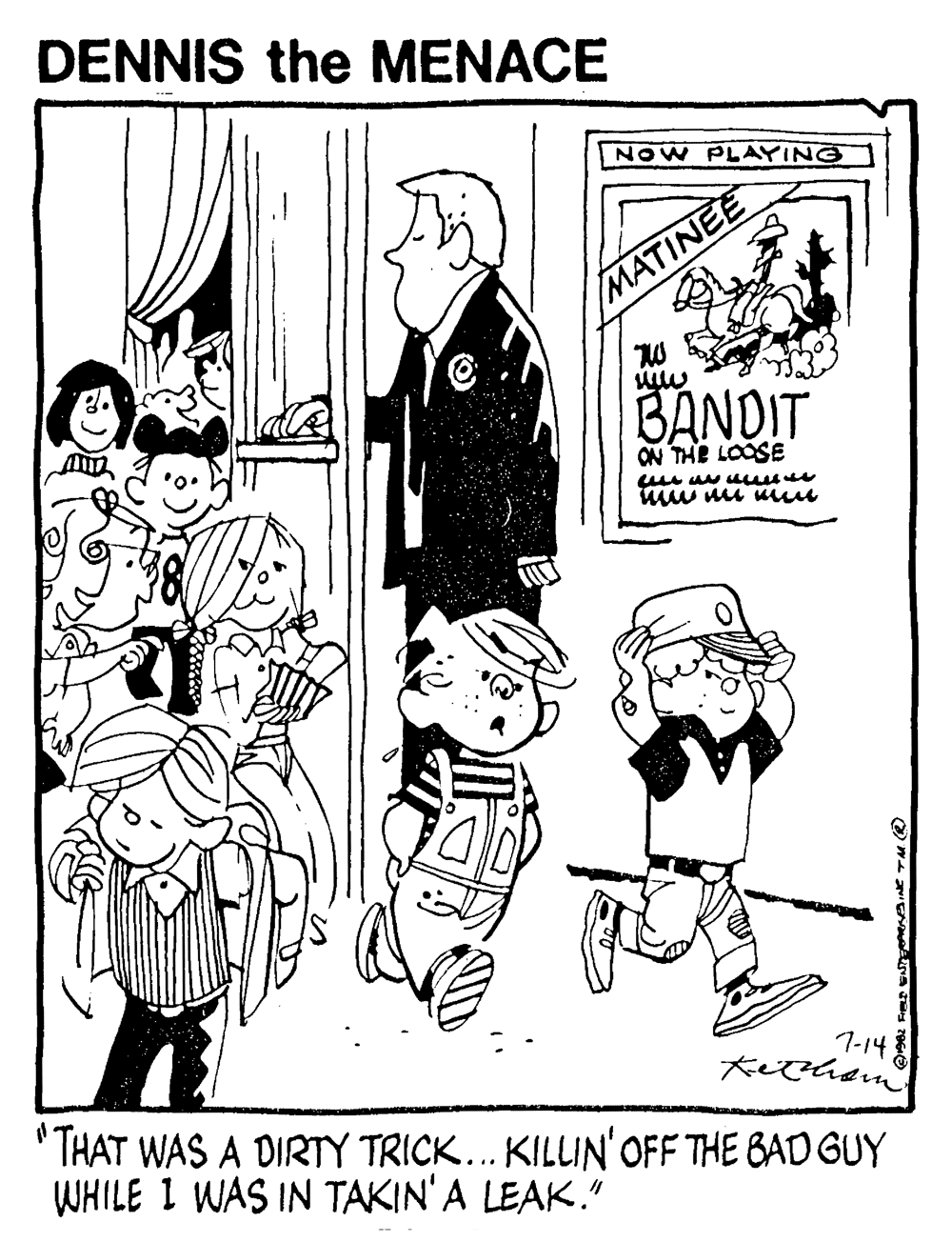 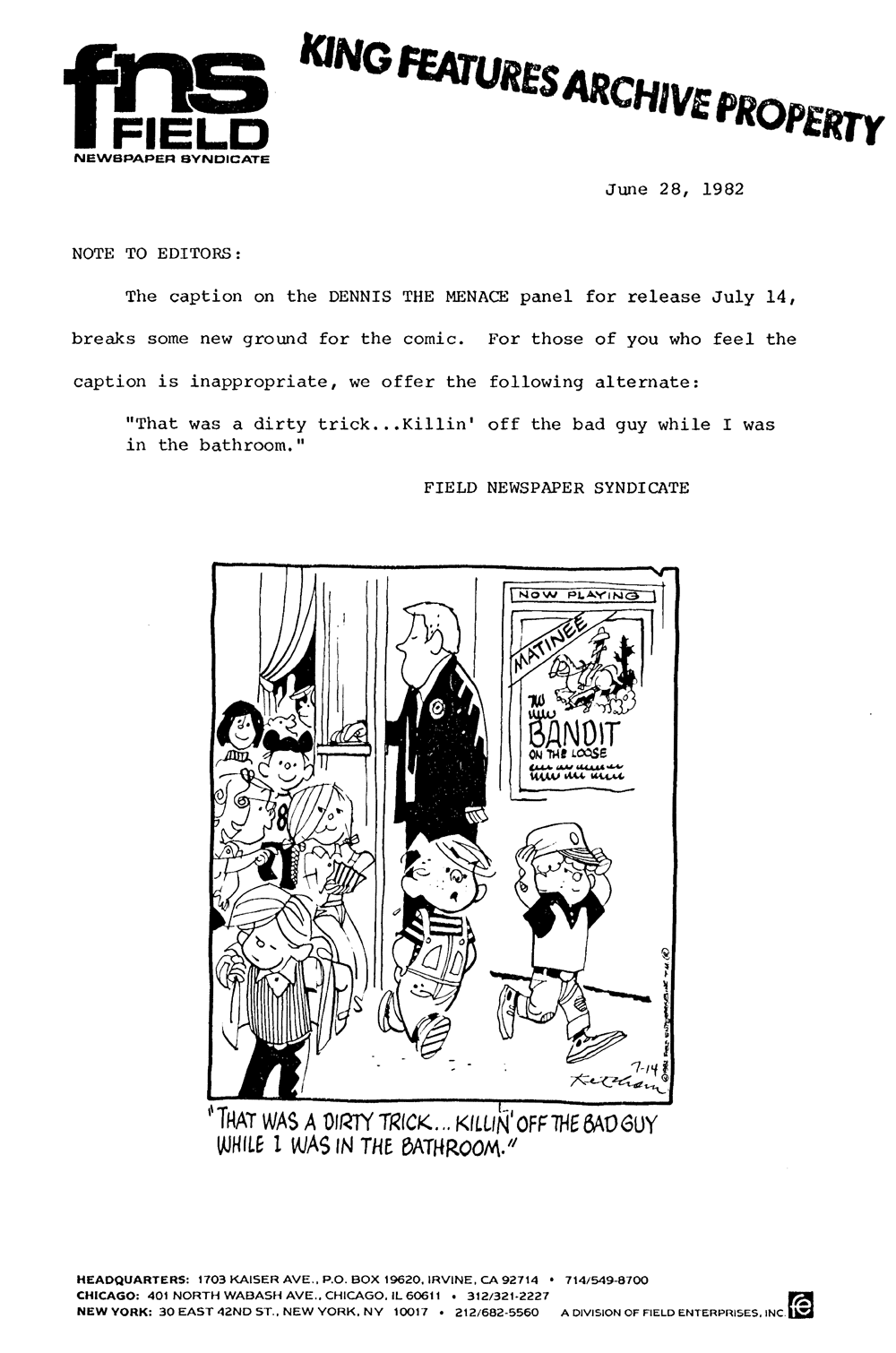 There have been times when events forced a hasty change. In 1978, a PEANUTS strip included a TV with the words “Ah, Colonel Hogan” emanating from it.  But when Bob Crane was suddenly killed, they scrambled to provide a replacement word balloon, reading “Ah, Mister Spock,” but some papers, like the New York Daily News, couldn’t change it in time.

To summarize, the newspaper comics industry has always strived to give out family entertainment. Our offerings have to be moral but still clever enough to compliment the reader and not insult his or her intellect.  Well, we don’t always achieve that but we try.