Ask The Archivist: The Burning Questions

First, I’d just like to say I’m glad you all enjoyed the Dik Browne graph. It was even picked up by The Daily Cartoonist, which was very nice to see.

Browne drew the graph in 1983, as part of a promotion urging features editors to run HI AND LOIS, which was then about to reach its 30th anniversary.

It’s always a wonder to me how fast things come and go.  Younger readers will not understand what Browne means by going “gadget happy” or the reference to fuller medicine cabinets. But since he lived from 1917 to 1989, his perspective was from living in the threadbare 1930s and 40s, and then experiencing  the post-War explosion of new health and food products, luxury items and the rise of a well-to-do consumer class.

Some of his observations were timely in the 80s, but seem hardly momentous now, like the ones about roller skating and T-shirts. Perhaps, Chip delivering newspapers was to make a connection with the intended audience of the chart.

As I like to do, I’ll try to answer some reader questions below:

I wish we had a really good file of artist photos. I have some, but it’s pretty hit-or-miss. Here’s one of the oldest photos I have, apropos at this time, a picture of Mort Walker and Dik Browne in the 1950s, deep in thought while collaborating on HI AND LOIS. (Dik’s the one with the glasses, Mort isn’t.) 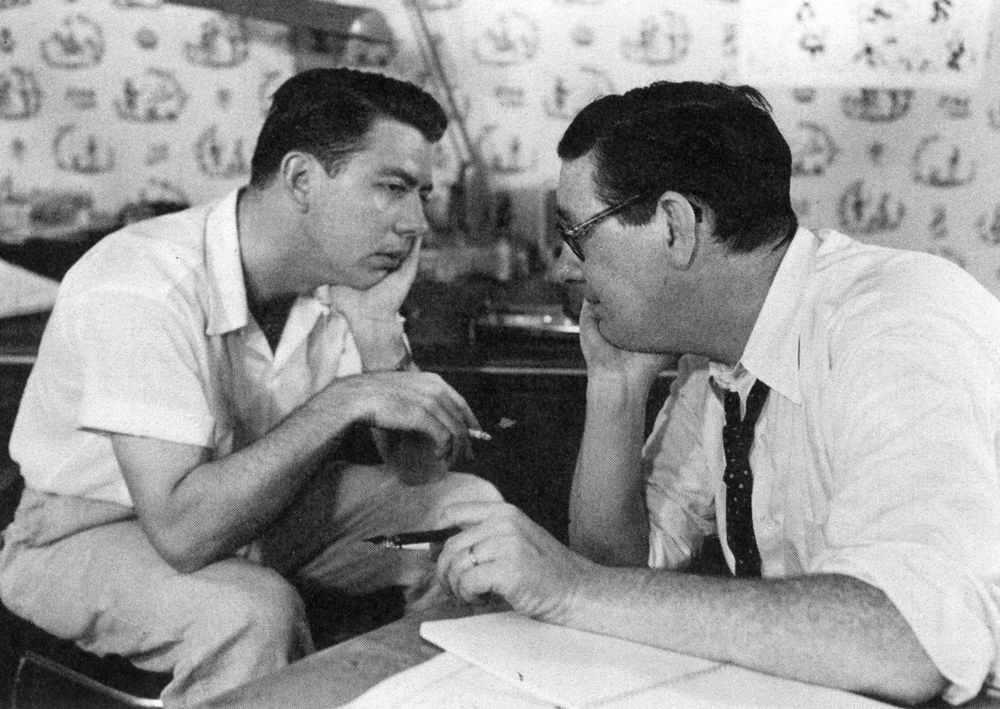 And no, we didn’t save a print of the LITTLE IODINE feature. I was actually searching for this film to help out a friend who was among the compilers of the AFI catalogue of American film about 20-odd years ago. No soap. It apparently did poorly at the box office and when it finished its’ meager rounds, the film went back to the producer.  In this case, that producer was sometime movie star Buddy Rogers, who didn’t save it, nor did his wife Mary Pickford, who had a  vault for her own  films. So now, it’s up in movie heaven, along with the lost 47 reels of GREED.

Here is a still from that film. Hobart Cavanaugh was Mr. Tremblechin  and Irene “Granny” Ryan was Iodine’s mom. I don’t know what’s going on, but you can bet Iodine brought it about and Daddy will lose his job. (Still courtesy of Cole Johnson) 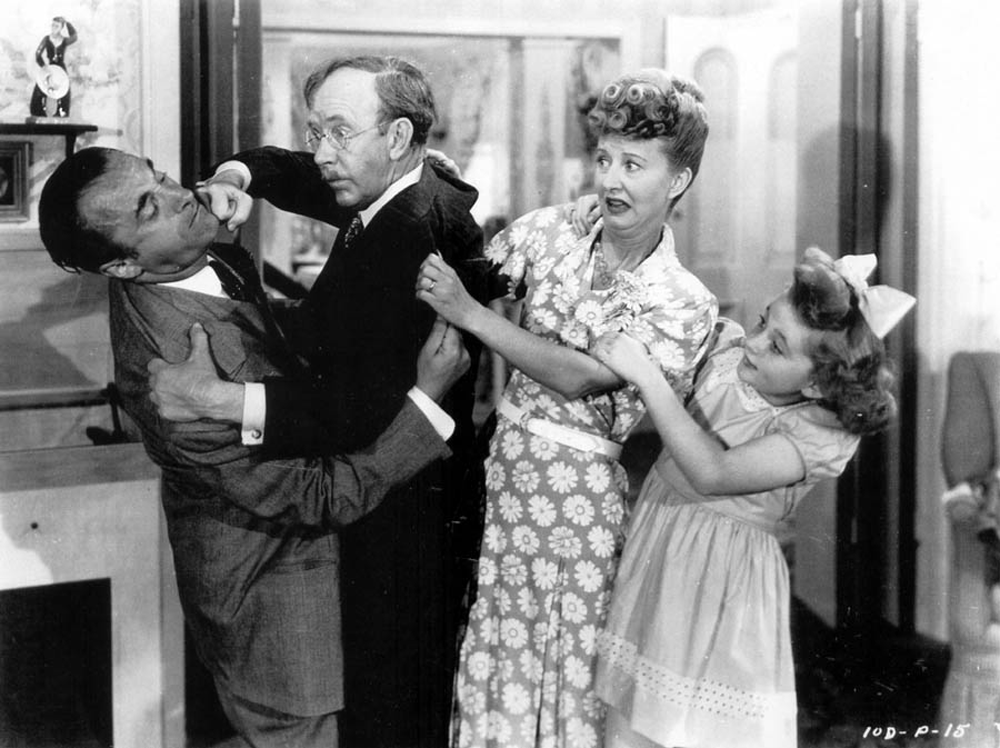 I was told a funny story by an older gentleman who also experienced the film. In 1946 he was in the Navy, on leave, in Baltimore. He went to a burlesque house, but due to a city ordinance, all theaters had to offer some family entertainment. He had to sit through LITTLE IODINE before they began what he was really there for!

A lot of strip creators are listed by the man who created it, not just the artist. Think of Lee Falk: how many dozens of fellows worked on his strips during his lifetime? It would be a sizable list.

We may put some Hatlo material into the mix. We have a substantial amount of both of his features. Are there a lot of fans out there? If there’s interest, we’ll happily provide more on him, of course.