VINTAGE MADNESS has ended, so we are now back to our regularly scheduled programming. I recently came across a historical timeline featuring HI AND LOIS, the final winners of VINTAGE MADNESS. The timeline was created in 1984 by Dik Browne and shows what Mr. Browne saw as milestones from the Eisenhower to Reagan years. He hadn’t considered computers yet! (The rising red line indicates the accumulation of newspaper clients over the strip’s first thirty years.) I thought it might be interesting. 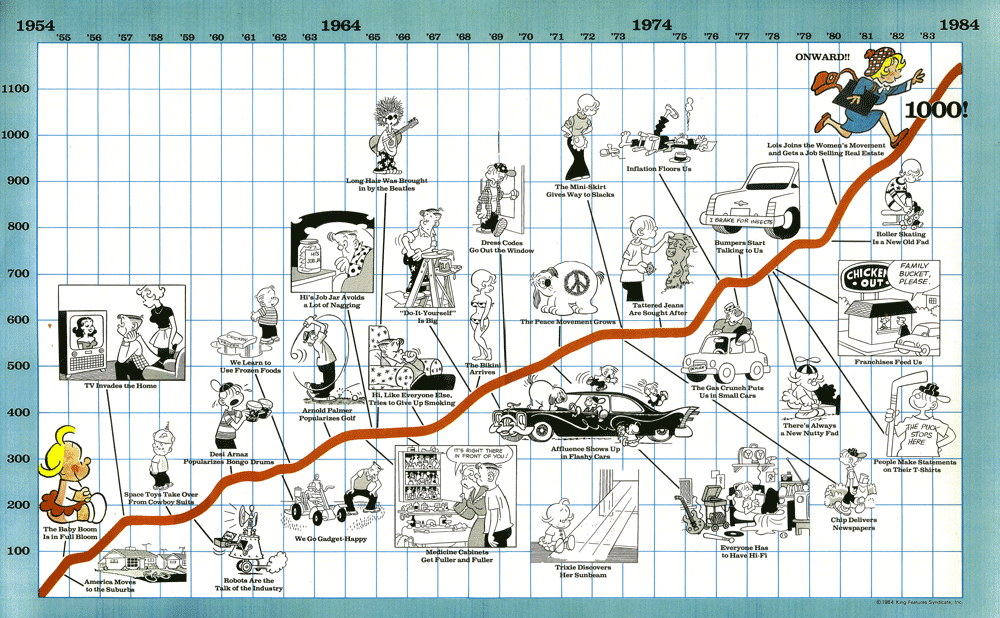 We received many comments on the VINTAGE MADNESS results, so I thought I would answer the questions some of you asked.

@Pete:
We would like to offer more material, but can only put out so much at a time. But rest assured, there will be more to come, eventually some one-time losers will resurface.

@TheFourth, @Bhob:
The MANDRAKE color Sundays are nice to look at, but they are rare. They were called “art proofs” and would be sent to the creators themselves, rather than the black/yellow/red/blue plate combination a client would receive. We, here at King Features, didn’t save them, mainly because they were impossible to reprint from in that era. The ones we use actually were Lee Falk’s own copies.

@Richard, @Chris:
To the best of our knowledge, Mr. LeDoux is still enjoying his retirement.

@Don B.:
The voting was, indeed, very much on the up and up. And, when our readers speak, we listen.

@Paul:
Unfortunately, most of the NAS archives are incomplete. Sometimes, we are able to augment them with another archivist’s assistance. For instance, Hank Ketcham was one of those rare cartoonists who thought saving a file of his own stuff was a good idea.  So, we’re grateful to have a virtually complete run of DENNIS THE MENACE, but that’s pretty much an exception to the rule.

@TheFourth:
Thanks for the nice comments. Sure, we wanted to put JUDGE PARKER in the Vintage line-up, especially after all the intense interest. It would be a shame to just mothball something that readers really care about. I’ll talk about some western strips soon in future “Ask the Archivist” posts.

@Bhob:
The originals were not colored and the resources to do that going backward just aren’t available to us. The current color processing is just for current strips being published. The days of color proofs and color guides are gone. It’s all digital now.

Please check back again next week.