On Monday, Brendan talked about FUNKY WINKERBEAN’S 40th anniversary. On Tuesday, in celebration of this momentous occasion, Black Squirrel Books (of the Kent State University Press) released a fabulous collection of the first three years of FUNKY WINKERBEAN, “The Complete Funky Winkerbean; Volume One, 1972-1974.” I’m so excited to have my copy! In addition to an amazing foreword by RC Harvey, chronicling the history of comics about teenagers, Tom Batiuk supplied the collection with lots of fascinating memorabilia from the early days of FUNKY, including childhood drawings and snapshots of his early rejection letters.

It would be worth it for those tidbits alone, but for me, having been born some time after FUNKY’s inception, it has been an incredible treat to read those early strips and learn about the early days of characters that I’m more familiar with in their adult incarnations. FUNKY WINKERBEAN has changed so very much in 40 years, and I think that’s a testament to Tom Batiuk’s integrity as a creator: he’s insisted that the strip grows and changes along with the world around it. It’s hilarious to see Les flounder around girls, watch “Crazy” Harry try to circumvent school rules, and generally follow the FUNKY gang as they try to navigate the ups and downs of adolescent life. And it’s all the more endearing when we’ve become so attached to the adults they would someday become.

If you’re a FUNKY WINKERBEAN fan, the first FUNKY collection is available to buy through Amazon. Give it a look!

One of the fantastic things about these early FUNKY WINKERBEAN strips is that many of them are just as relevant today as they were 40 years ago. Even in the beginning, the kids were tackling big issues like civil rights, gender equality, sex education, and the environment.

Here’s the first week of FUNKY WINKERBEAN, from back in 1972. 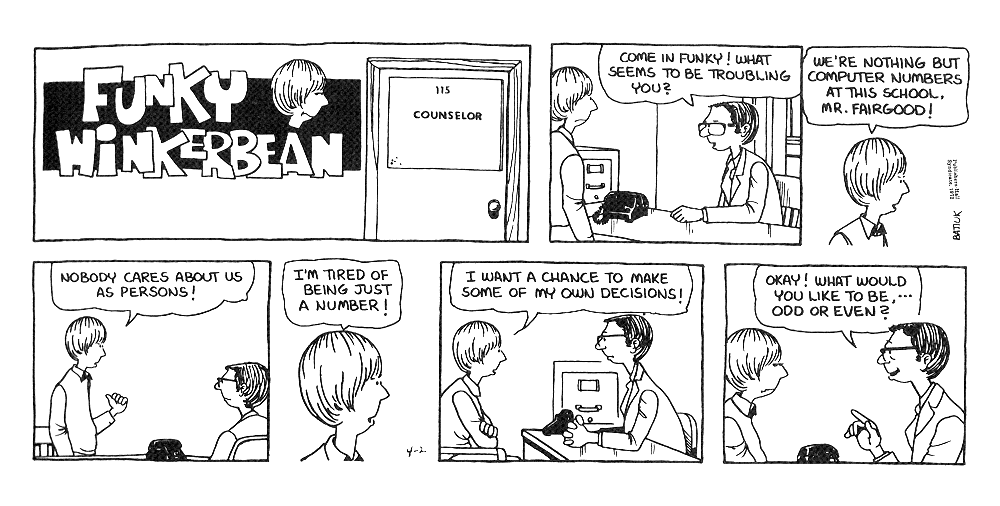