VINTAGE MADNESS is starting to heat up! The winner of Round Three is THIMBLE THEATRE! Votes were cast heavily in the beginning of the week for the strip that launched Popeye’s historic career, but TIM TYLER’S LUCK started to turn later in the week and it almost managed an upset. But, alas, luck wouldn’t have it! And, THIMBLE THEATRE moves on to the next round of the competition.

This week marks the fourth match of VINTAGE MADNESS to see which strip will be the next addition to the DailyINK Vintage lineup. On deck in this week’s match-up is KING OF THE ROYAL MOUNTED versus JUDGE PARKER.

King was the original straight-arrow lawman of the North, the always-gets-his-man Royal Canadian mounted policeman created by Zane Grey. 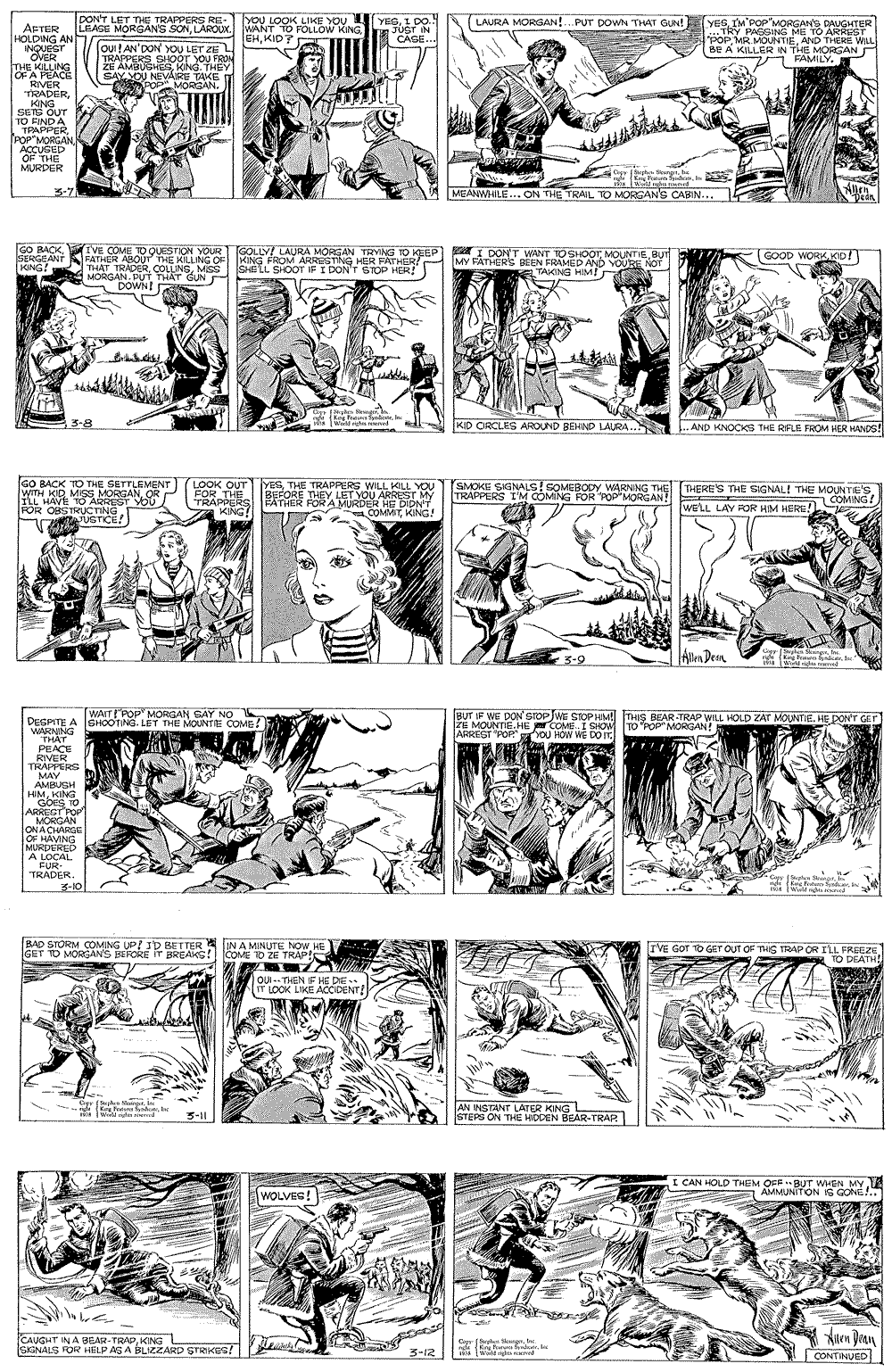 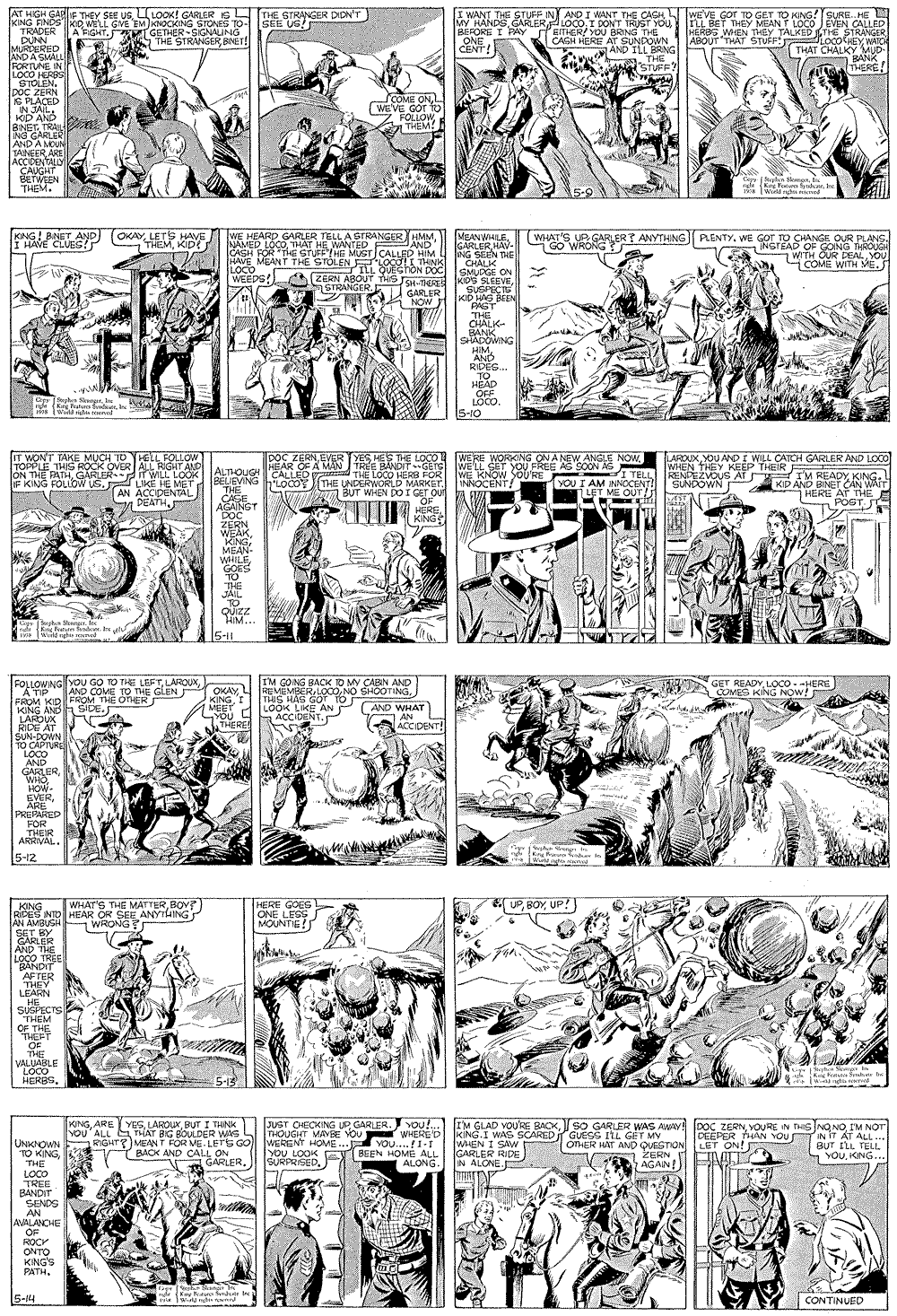 Judge Parker is in another area of law enforcement. He metes out compassionate justice by investigating and involving himself with the problems of those in trouble.

This grudge match is going to be a close one. It’s up to our loyal DailyINK Vintage readers to vote which strip makes the cut? Pick your favorite by voting now.

I’ve received a lot of bracket feedback, so I’d like to take a moment to respond to some reader comments…

Sorry your candidates lost the election, but it really was a fair fight, after all.

Don’t be discouraged, though. I agree, JOHNNY HAZARD was a great adventure series, even into the 1970′s. We’re considering another election later this year. Please bear in mind, putting up more content isn’t as simple as one may think. While KFS has a wealth of great historical content, much of it is not in web-ready form. Sorting and processing all that delicate material is one of the reasons I can only blog once a week.

Your assessment is, unfortunately, spot on. But the trend toward less continuities has been with us for about 60 years. They used to be a draw for newspaper readers who would follow the stories of their favorites, making sure to buy the newspaper that carried it every day.  Chicago Tribune Syndicate’s offerings would often have the Sunday versions as part of the ongoing story in its dailies. We rarely did that at King Features Syndicate.

My take on the reason for the thinning ranks of continuities is that perhaps as the Golden Age (1920s-1950s) audience grew older, their childhood favorites were viewed as, well, childish. The kids of the postwar years didn’t pick up the habit. They were a more sophisticated lot than their parents, and prosperity brought new diversions like television, cheap transportation, and most of all, comic books.  Why wait for four panels a day when you can get a whole story at once? New adventure continuities were tried, and some, like RIP KIRBY, were successful for many years, but most have, alas, run their course.

For a while it seemed that the romance/family continuity strips were holding on better than the actioners, and we still have some strong contenders like MARY WORTH, APARTMENT 3-G and JUDGE PARKER, but I think editors would rather offer their readers gag-a-day strips that can be read quickly and happily.

I see here in New York, for instance, of the three newpapers that feature comics: New York Post, New York Daily News and Long Island’s Newsday, there’s only two continuity strips between them, and that’s Universal’s DOONESBURY and Tribune’s GASOLINE ALLEY, both of which are in the NY Daily News.  You can’t buck the trend; you can only give people what they want.

DENNIS THE MENACE was very funny in the 1950s and 1960s. If people out there only know him in his present-era, more mellow self, they will be pleasantly surprised by Hank Ketcham’s earlier, edgier Dennis.

Dik Browne was not only a great illustrator, but a very clever writer. HI & LOIS, of course, was done in tandem with Mort Walker. All three of these men were/are giants whose reputations were made in the 1950s, and all of their work is well worth looking at, even if you had voted for another strip.