February 13, 2012 marked the 75th anniversary of PRINCE VALIANT, and we don’t wish to let that milestone pass without comment.

At first, an Arthurian saga would seem an unlikely basis for an American series, but the high-adventure possibilities transcended the English setting. The gifts that Hal Foster possessed as a great illustrator are as legendary as his subject, and will always rank as one of the greatest. Perhaps one of his talents  is often overlooked. He was able to deliver his creations every week on a tight schedule and never short change the intricately composed linework for more than 30 years.  Not every cartoonist has this important ability. You can be the best cartoonist in the world, but if you can’t make deadlines, you’re not going to stay one.

The late Bill Yates, (in his King Features editor days), once told me that the inimitable Norman Rockwell had been signed on to do a strip, but he couldn’t work fast enough to even finish the pilot three weeks’  worth of samples, even when given a month in which to work. As a result, there wasn’t a Rockwell series. 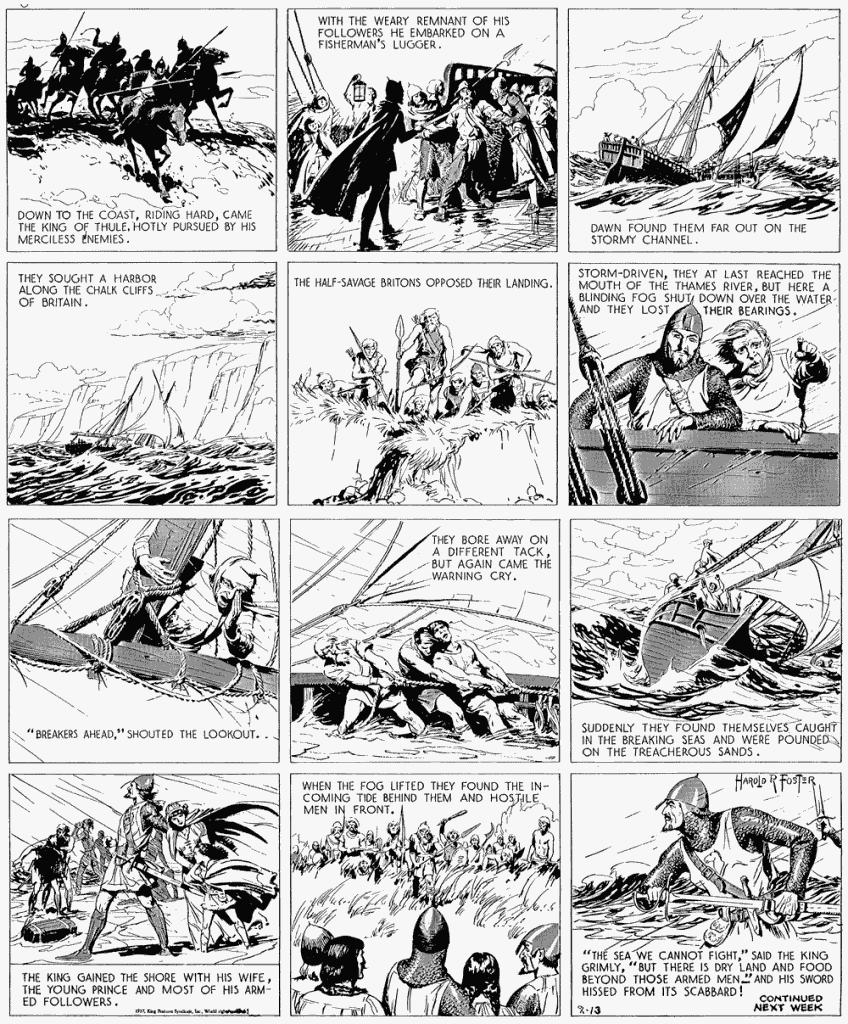 It was launched on Saturday, February 13, 1937. In those days, many Sunday format series were offered with Saturday dates. MANDRAKE and BRICK BRADFORD were two others, for instance.  Hearst had several evening papers in its’ chain that offered a Saturday comic section for many years. The morning paper in the same city, of course, had the Sunday section. The PRINCE VALIANT page has always been numbered as well. When a strip is originally proposed, several samples are made to more accurately judge if it is worthy of syndication. When they are accepted, these samples become the first of many strips. They are cited somewhere on the artwork in the sequence designation. After the first three or so, they stop doing it and an assigned date for it to run on is needed. But somehow, Foster never dropped the numbering, and it continues to this day.  (For all you minutiae fans, the last PRINCE VALIANT with a Saturday date was May 7, 1938, and the first Sunday ran May 15, 1938). 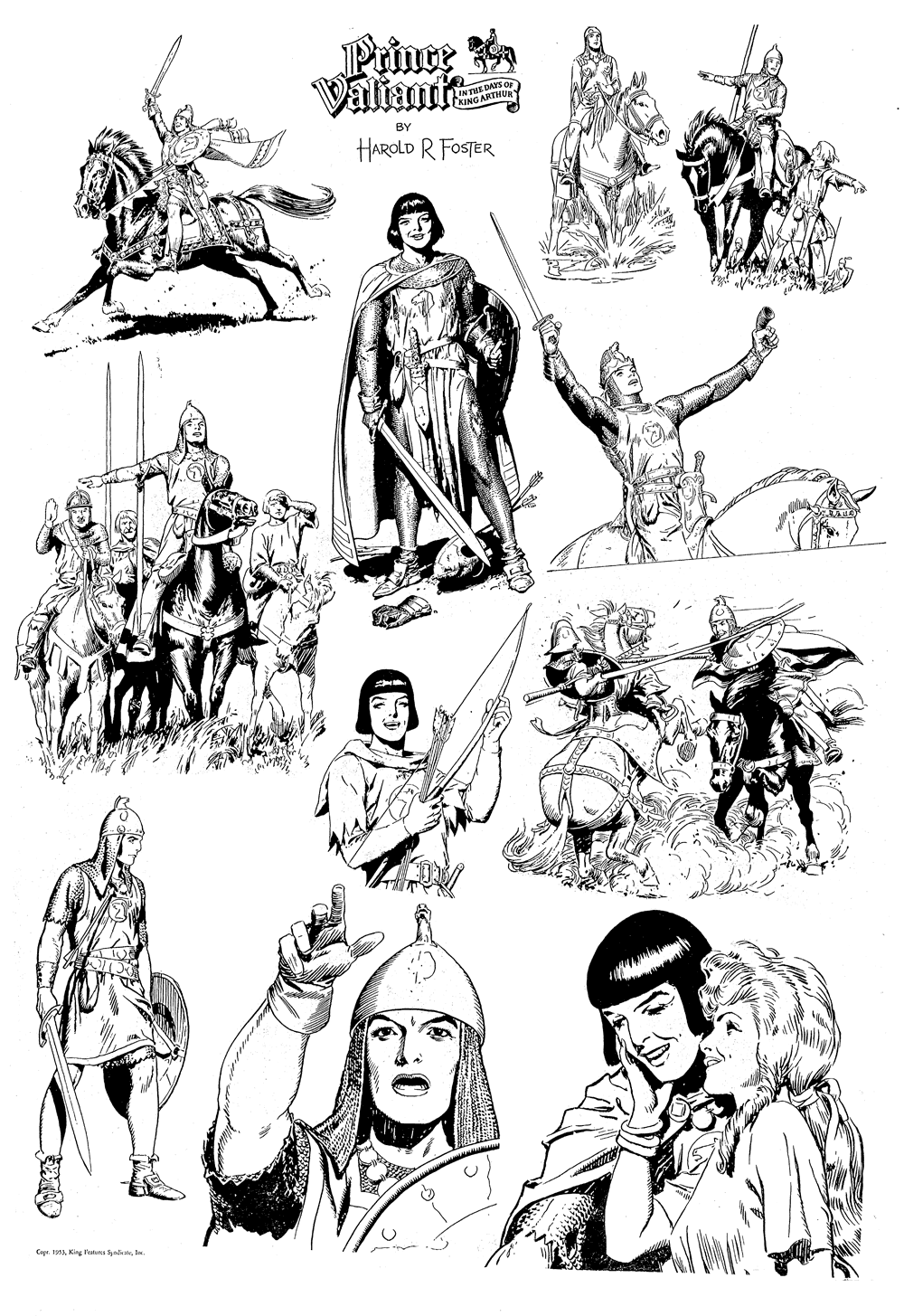 These masterpieces are things of beauty to behold, especially nice to see them in black and white, leaving the fine lines unobscured. Today, Foster’s originals are very valuable and eagerly sought by collectors. Some are in museum collections as fine art.  Things were not always so. Another reminiscence of Yates was that he would often join other Hearst men and play cards at Foster’s home. There, one would see stacks of originals piled up after being returned by the engravers. They were spilling onto the floor, even getting walked on!  Well, Foster didn’t know what to do with them, and he didn’t really care. Bill’s father-in-law was a big fan of the strip and asked him to please ask Hal to save  some for him. Sadly, Bill never remembered to take a few, and Foster just threw the originals away. Of course, the “used” art for a comic strip wasn’t worth anything… just like all those classic superhero comic books. The trash of 1950 is the platinum of today.

Yes, that is an intriguing  idea, I should do a piece on the evolution of some characters.

For a real example of drastic change, last week I showed how TILLIE THE TOILER looked in her first year, here is a week from her last year: 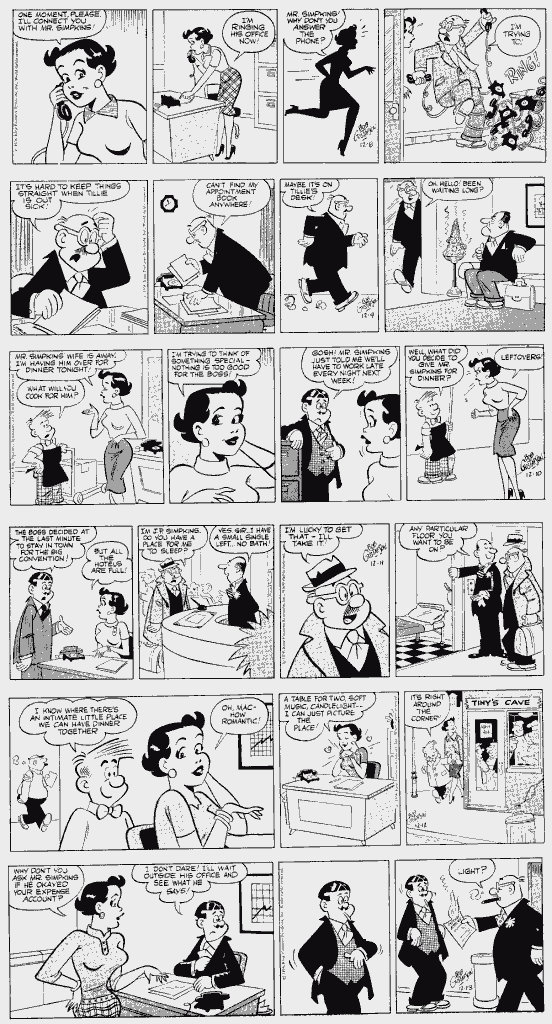 See you here again next week,