Today, I will salute Black History Month with a look back at two very different strips that featured black stars.

The first Hearst series starring a character of color was Sam, or “Laughing Sam.” He was created by James Swinnerton, of LITTLE JIMMY fame, in 1905.

Sam was a fat,  jovial fellow whose days were mainly filled with looking for and subsequently losing various jobs. He couldn’t keep a job,  but not from lack of trying. Something always seemed to inspire an outbreak of spontaneous laughter from Sam, much to the embarrassment of his boss of the minute or any passing person who struck Sam as funny. Sam would usually get a slapstick retaliation, usually resulting in, or ending with, his getting  things thrown at him, being busted over the head or thrown out the door.

Though Sam is drawn in a stereotypical manner, as was common at the time, he is for the most part treated the same as any other character. Cartoonists’ interpretations of characters’ race have come a long way in 100+ years. 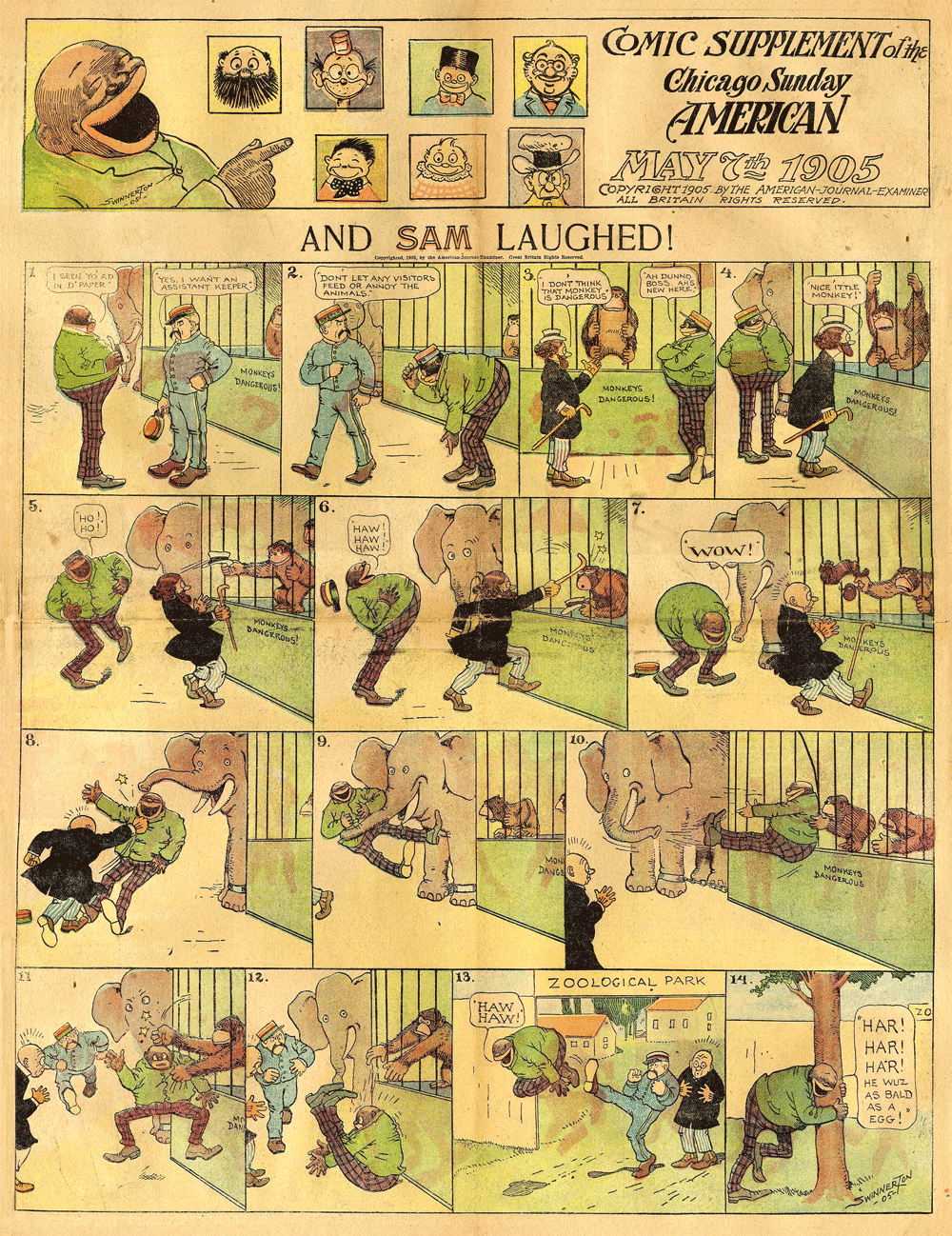 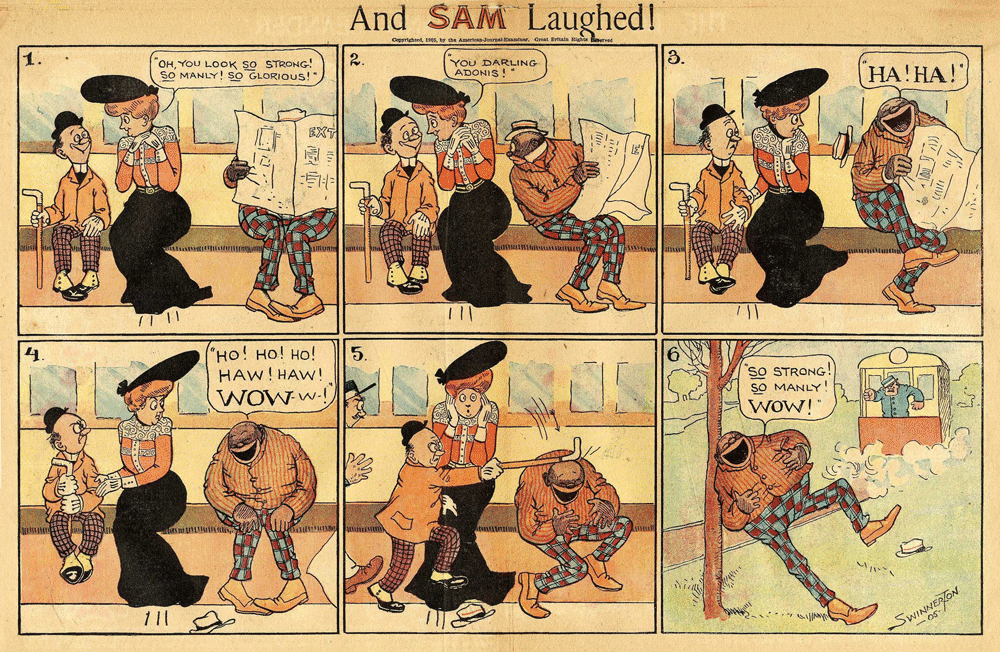 Sam get in the way of true love on a streetcar.
(Chicago Sunday American 21 May 1905) 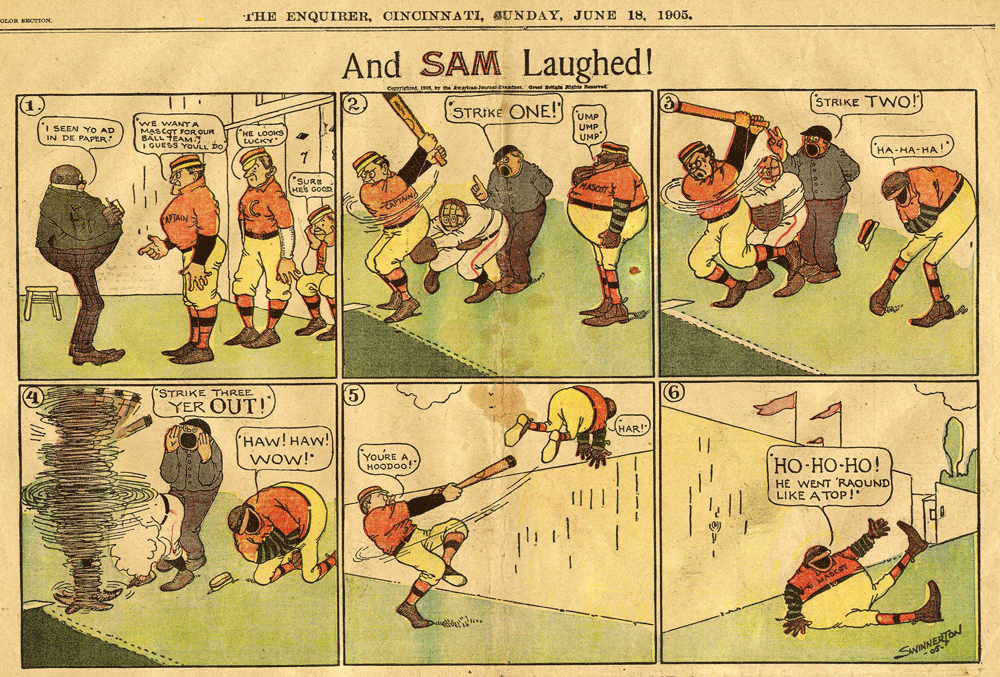 Sam doesn’t cut it with the team. Is the “C” on their uniforms significant?
(Cincinnati Enquirer 18 June 1905) 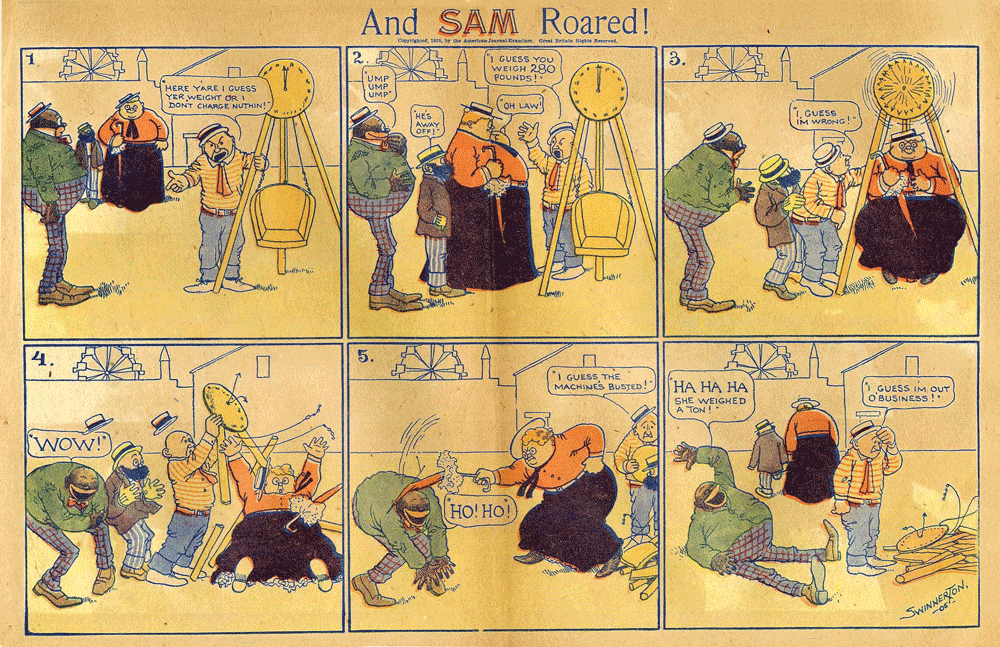 AND SAM LUAGHED lasted several years, off and on. Around 1909-10, Sam became the valet of another Swinnerton character, Mr. Batch.

Another strip, worlds away in time and character was QUINCY, by the great Ted Shearer (1919-1992). QUINCY was one of the first mainstream, big syndicate strips created by a black cartoonist.

Shearer, who was born in Jamaica and raised in New York,  had once done strips for the Continental Features Syndicate, which served the many black-interest  newspapers that existed during the years of cultural segregation. In the 1950’s and 60’s, Shearer pursued a career in advertising art. His magnum opus came about when,  during long train commutes, he toyed around with doing a strip, about an eight-year-old boy living in the big city, much like his own childhood. A fellow commuter and a King Features staff artist, William Gillmartin, was impressed with his work and got Shearer into syndicated cartooning again with QUINCY. 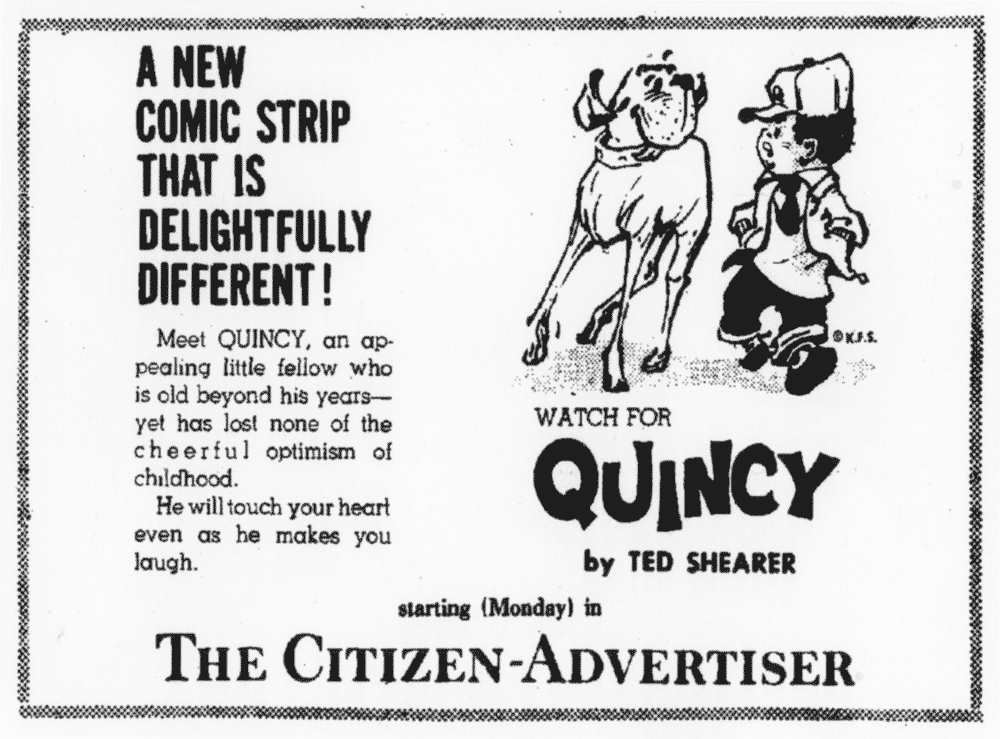 QUINCY ran from July 13, 1970 to October 4, 1986. QUINCY was a daily only, which is a shame. I always was drawn to Shearer’s evocative, impressionistic settings. This was a man who knew how the inner city felt, not just as it looked. The cast included Quincy, who lived only with his grandmother, and the racially diverse kids in his neighborhood.  The humor could be philosophical but never solemn. It was sometimes wise but never snarky.

The kids in Quincy’s world may have lived in poverty and had few luxuries, but there was always a lighthearted confidence in their lives. I always found this an interesting counterpoint to the childhood depicted by Charles Schultz’s PEANUTS  gang, who were well-off, middle-class suburban kids who were all deeply unhappy and wracked with angst.

Here are some classic QUINCY strips from the first year of the series: 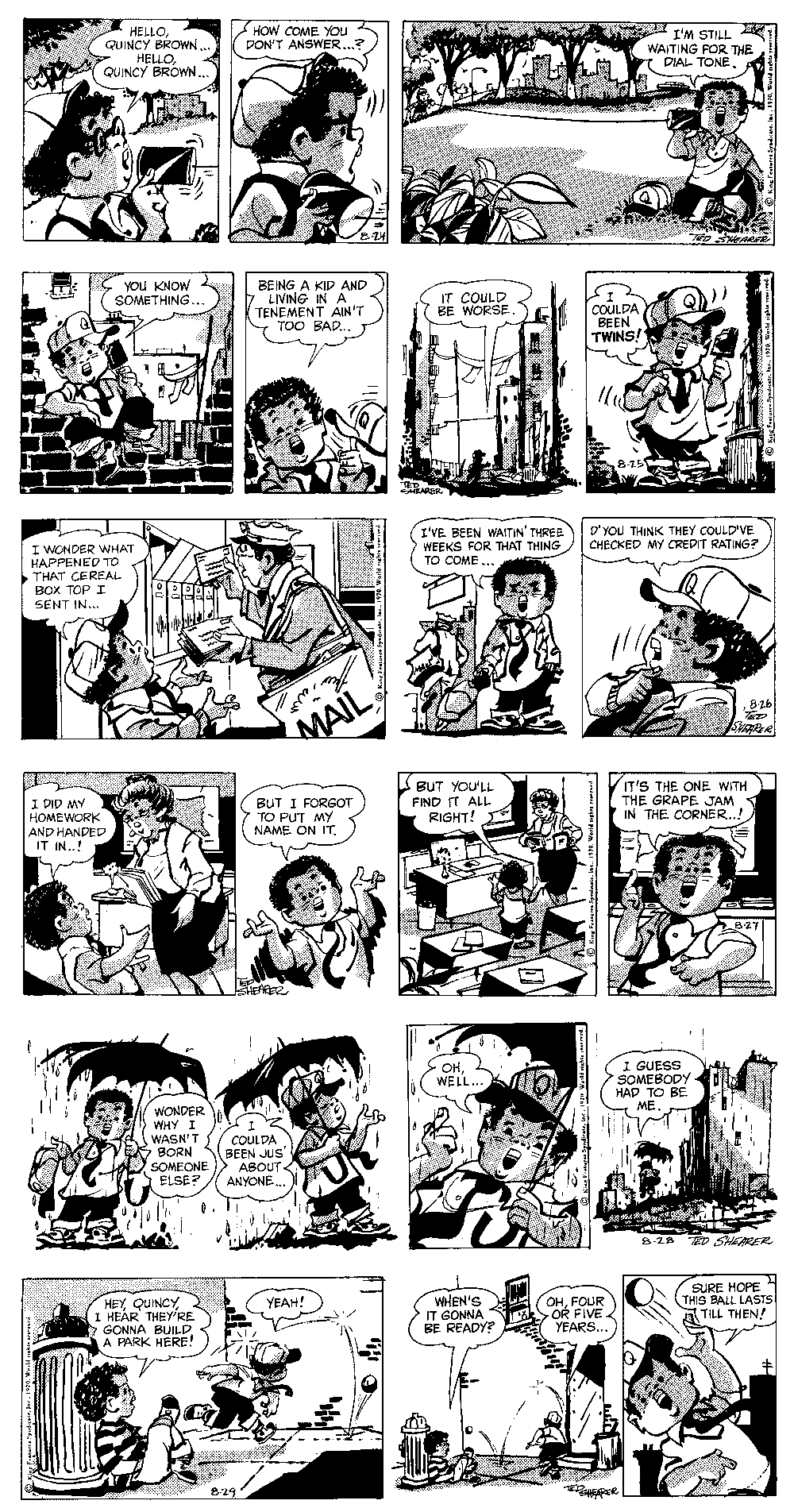 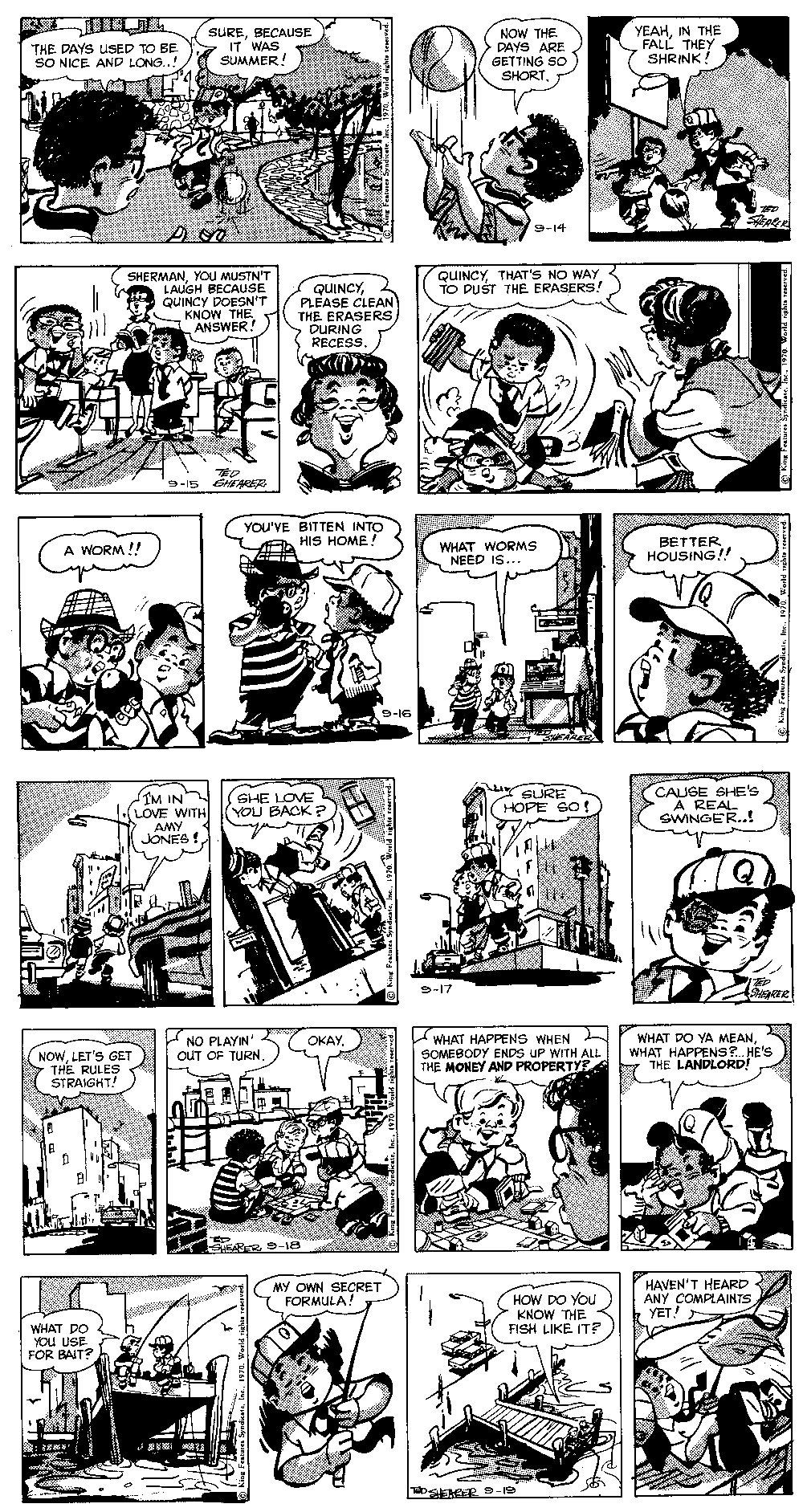 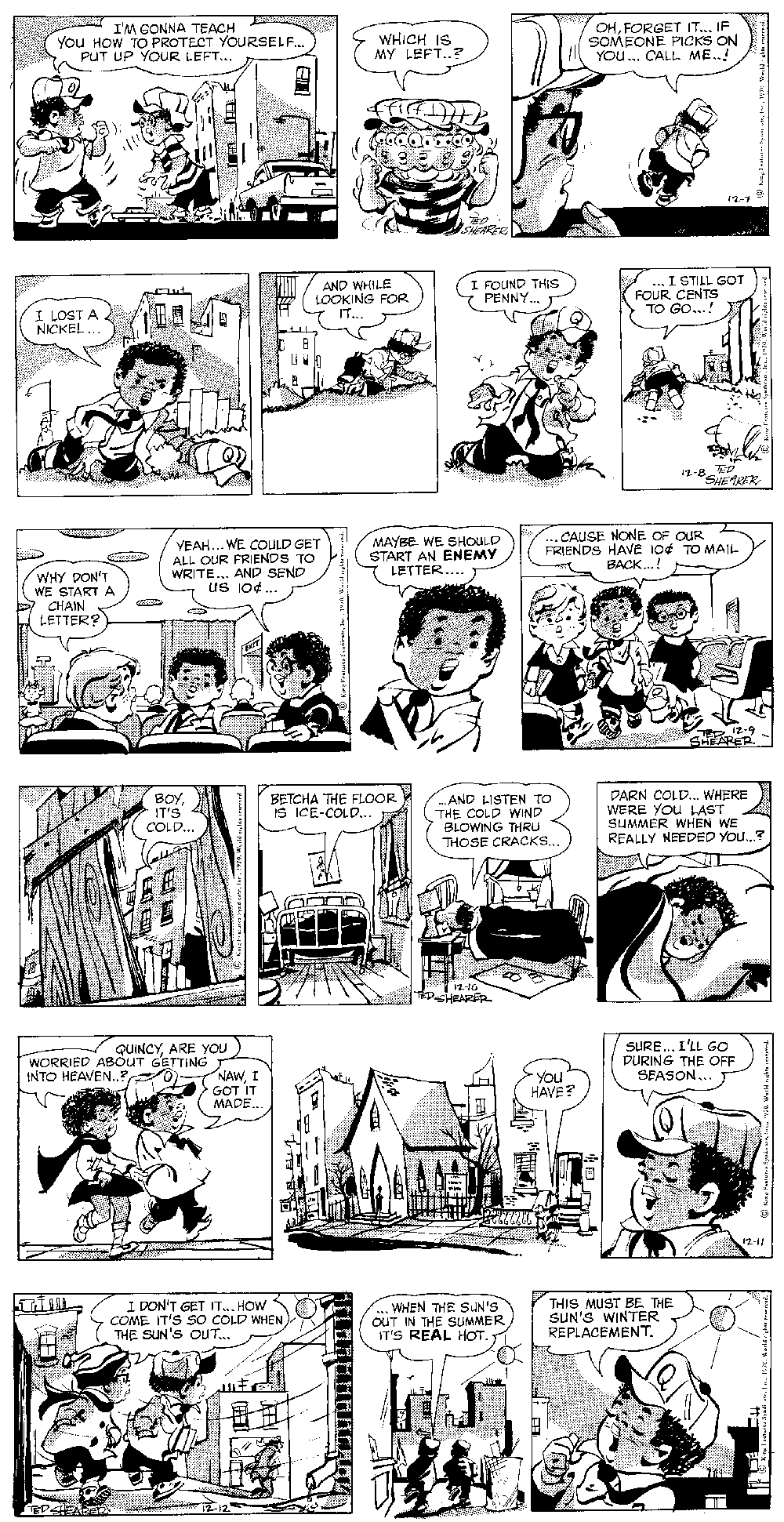 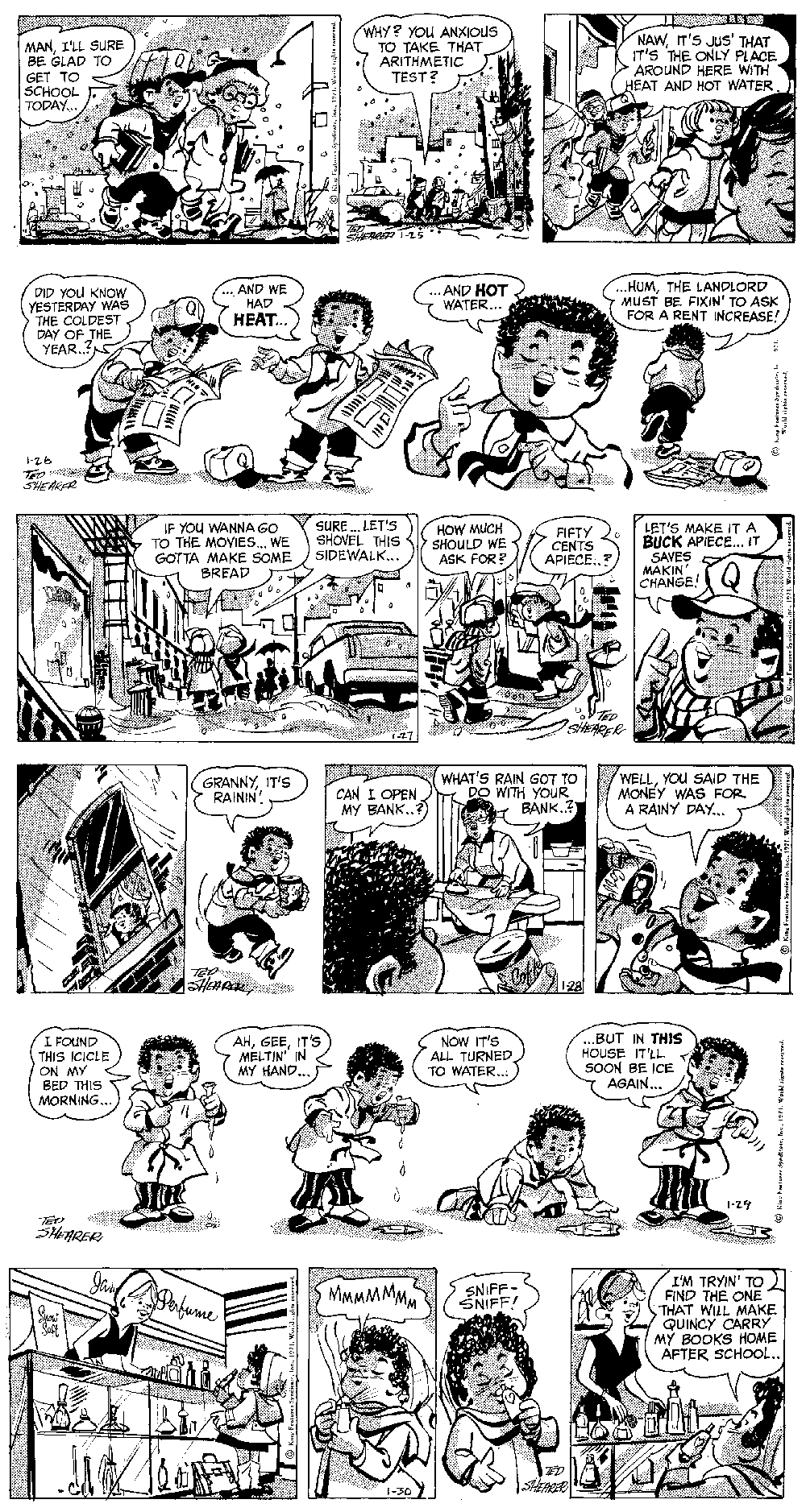 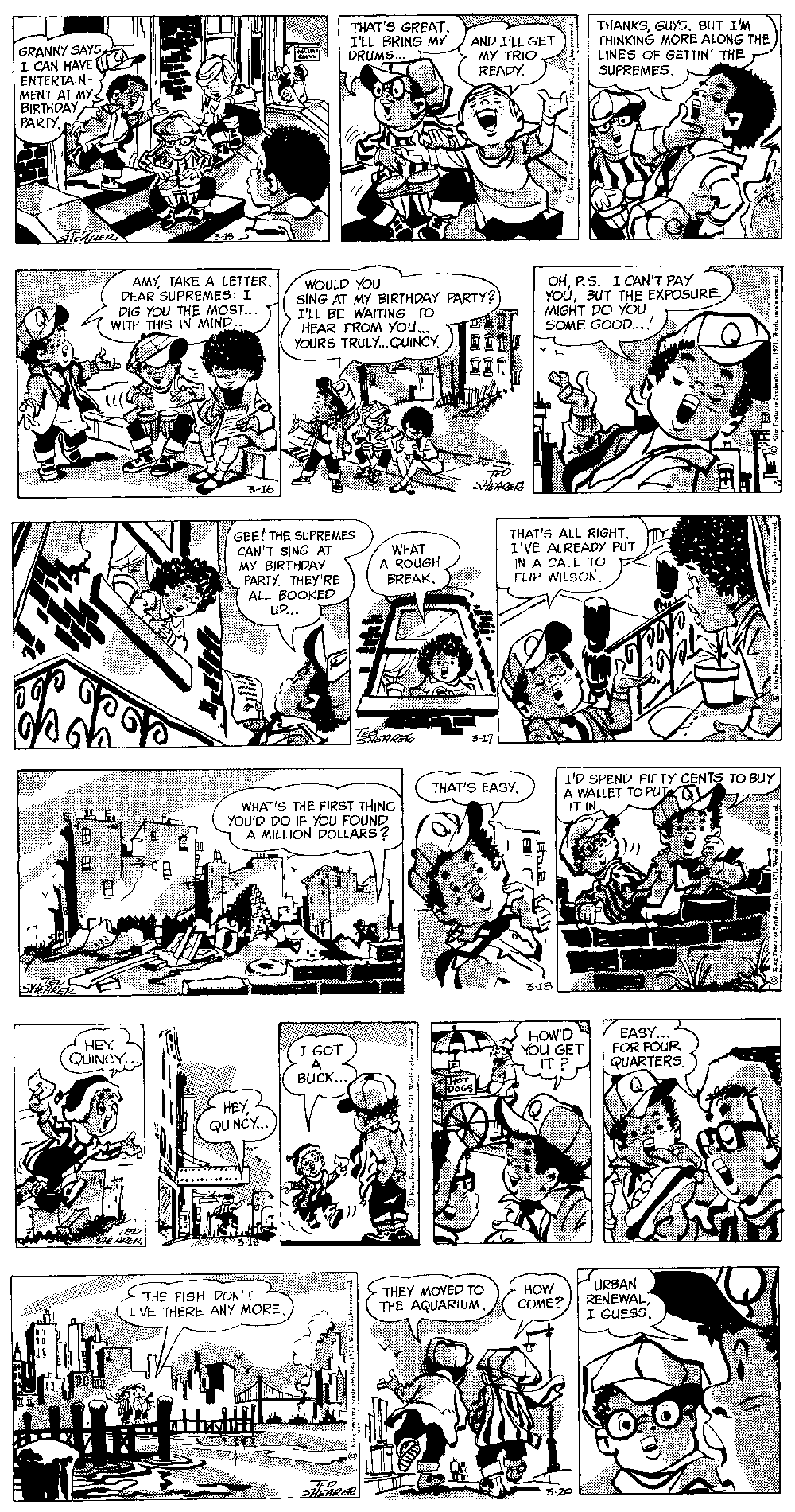 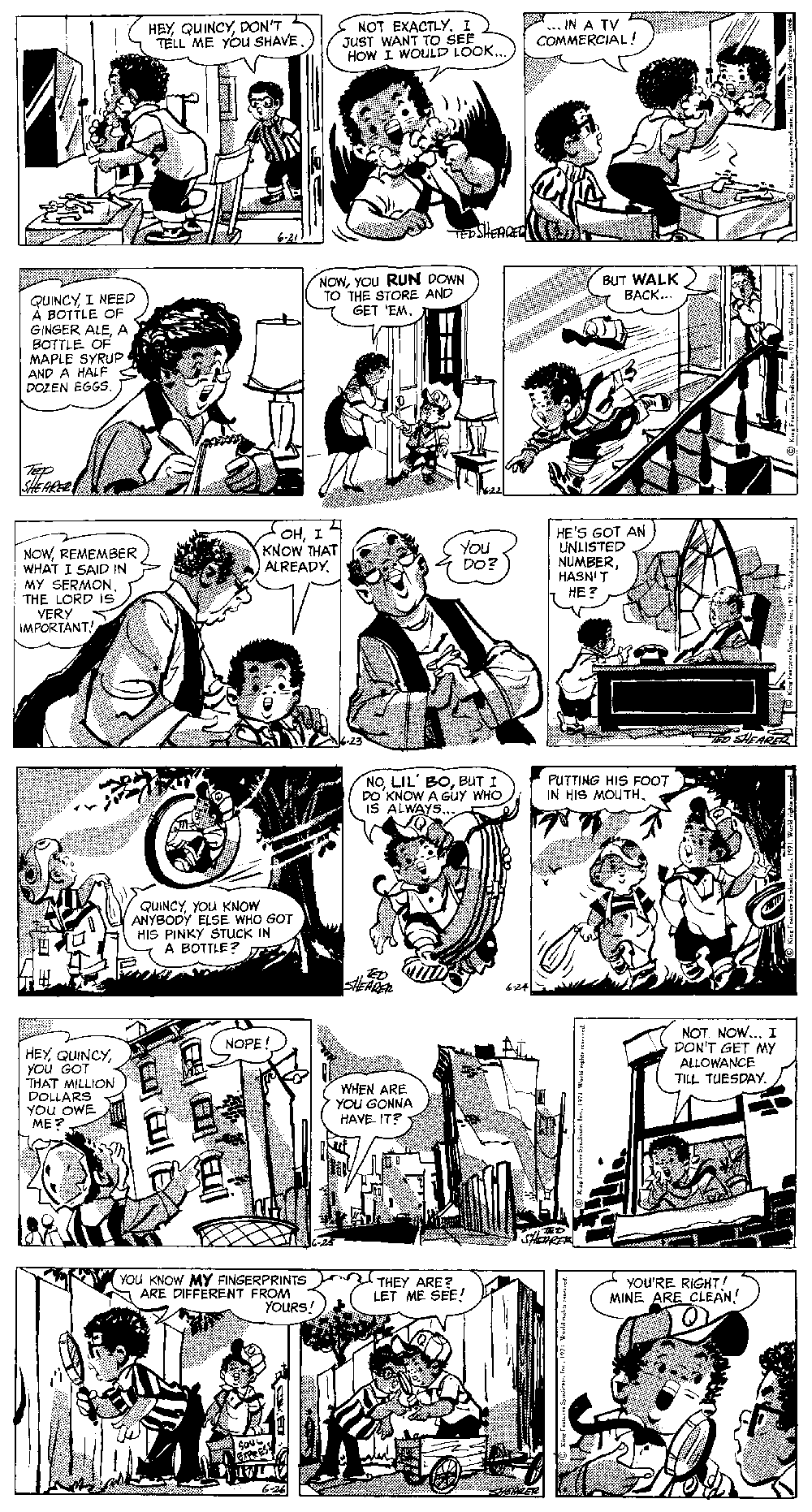 Next week, we’ll look at PRINCE VALIANT on his 75th birthday.