Ask the Archivist: The Many Loves of Beetle Bailey

Originally, in the college boy era of the BEETLE BAILEY strip, Beetle’s girlfriend was “Buzz,” a somewhat plain-Jane blonde with freckles.

Over the next few years, when Beetle is out of college and into his permanent spot at Camp Swampy, Buzz is often seen as part of what home means to Beetle and to whom he wishes to someday return. In fact when he goes back on leave, she’s there waiting for him, still regarding Beetle as her sweetheart.

Mort Walker himself said in The Best Of Beetle Bailey (Comicana 1984) that “ Buzz was replaced by Bunny,” but it didn’t happen overnight.

Buzz and Beetle  eventually drift apart, and by 1958 he’s got a new girl—or maybe girls. They all look the same, though they have names like Millie, Kathy or Julie. His type has definitely switched to brunettes.

In 1959, he finally settles on Bunny, just in time for the Beetle TV cartoons to be made where she was often seen. 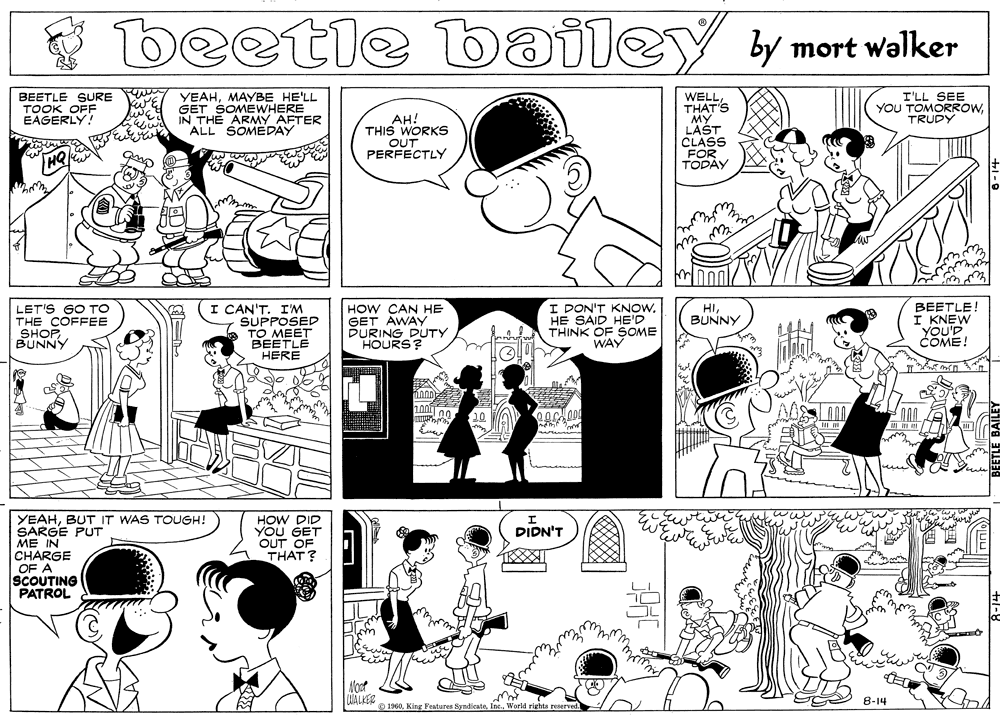 Originally, Bunny was more or less a complete replacement for Buzz, right down to the college surroundings.  This didn’t last long, and she soon became a straight woman for bad/cheap date jokes.

Over the years, readers would see Bunny make fewer appearances. She finally has gone the way of Buzz, and Beetle now dates Miss Buxley.

Buzz and Bunny were wholesome, all-American girls next door, which is sadly becoming a pretty passé character. But, Beetle isn’t complaining.