In honor of National Animal Shelter Appreciation Week (Nov. 6 -12), we’d like to talk about cats and dogs for the next couple of weeks and pay tribute to some of the comics’ most beloved four-footed friends. This week’s post is centered on genus Feline, and next week’s post will focus on genus Canine. 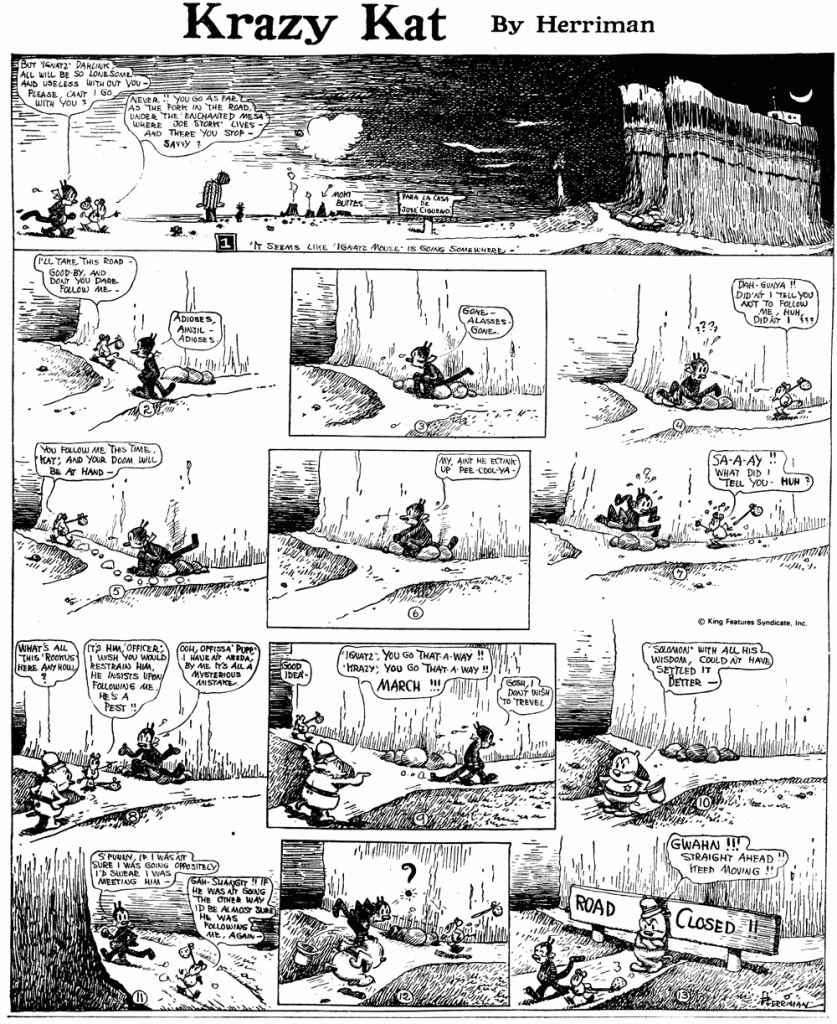 Paws down, the most famous feline star of the funnies is Krazy Kat. KRAZY KAT was created 101 years ago by cartoonist George Herriman. Prior to KRAZY KAT, Herriman had created a cat before, one Alexander the cat, who was part of a Sunday-only series for World Color Printing Co. from 1909-1910. In his daily Hearst strip, THE DINGBAT FAMILY, Herriman added a cat and mouse on July 26, 1910. This cat and mouse would become the unforgettable Krazy and Ignatz. Soon after, Krazy got his own strip in the Hearst evening papers, where he would often share the comics page with Herriman’s other strip, THE FAMILY UPSTAIRS. (THE DINGBAT FAMILY had been retitled THE FAMILY UPSTAIRS, and it was eventually replaced by BARON BEAN.)  Both of these strips faded away, but KRAZY KAT continued to enjoy many lives and adventures until Herriman’s death in 1944.

Outside the newspaper comics page, KRAZY KAT was an early licensing success story in film. When Hearst starting making its own newsreel, animated segments featuring the syndicate’s most popular characters were included starting in 1916. Eventually, KRAZY KAT cartoons were made by the Mintz Studio and released by Paramount, followed by Columbia, until 1940. After a break of twenty years, a final cartoon series was made for television by King Features Entertainment in the 1960s. Hopefully, KRAZY KAT will use one of its nine lives and return someday.

Still well known (and still in business) is FELIX THE CAT. This cat superstar was created by an Australian named Pat Sullivan. In the reverse of Krazy’s trajectory, FELIX THE CAT was seen first as an animated cartoon series in 1919.  Felix was a vagabond character, always trying to score a handout or a soft spot to sleep, relying on his wits like Charlie Chaplin’s Tramp persona. These short films were instantly popular, inspiring books, toys, songs, and finally, a comic strip of its own in 1923.

The art for the films and the strip was drawn for many years by Otto Mesmer, who had to sign his boss’ name. The strip lasted until the 1960s. By then, FELIX THE CAT  was drawn by Joe Oriolo, who also produced an early 60′s television series of FELIX THE CAT  cartoons that some Baby Boomers may recall fondly.  The most recent incarnation of FELIX THE CAT on the comics page was when Felix was teamed up with Betty Boop from 1984 to 1987 in BETTY BOOP AND FELIX by the Walker brothers. 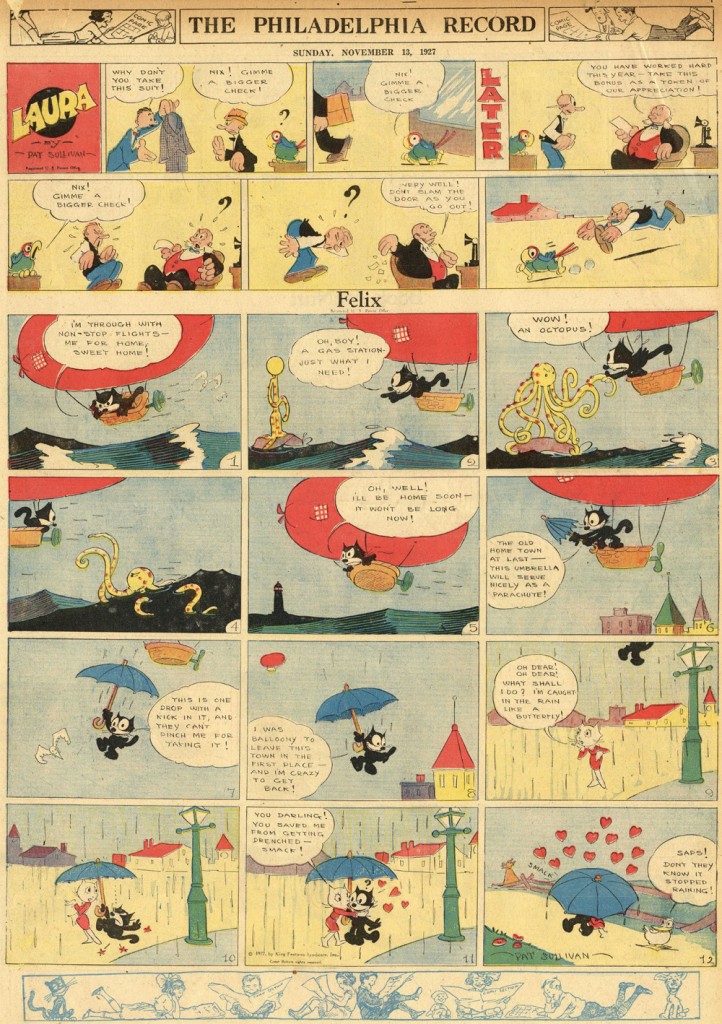 A FELIX THE CAT Sunday with top strip LAURA in 1927.

A lesser known but charming strip by one of the great female cartoonists, Grace Drayton, was THE PUSSYCAT PRINCESS which began in 1935. She had created several series since the early 1900s, including THE TURR’BLE TALES OF CAPTAIN KIDDO for the Philadelphia North American Syndicate, BOBBY BLAKE AND DOLLY DRAKE for the Philadelphia Press and TOODLES for Hearst. All were adorable moppets, often with vivid imaginations. Her most famous creation was the long running CAMPBELL KIDS, of soup fame.  After she died in 1936, the adventures of THE PUSSYCAT PRINCESS were continued by Ed Anthony and Ruth Carroll until 1947. 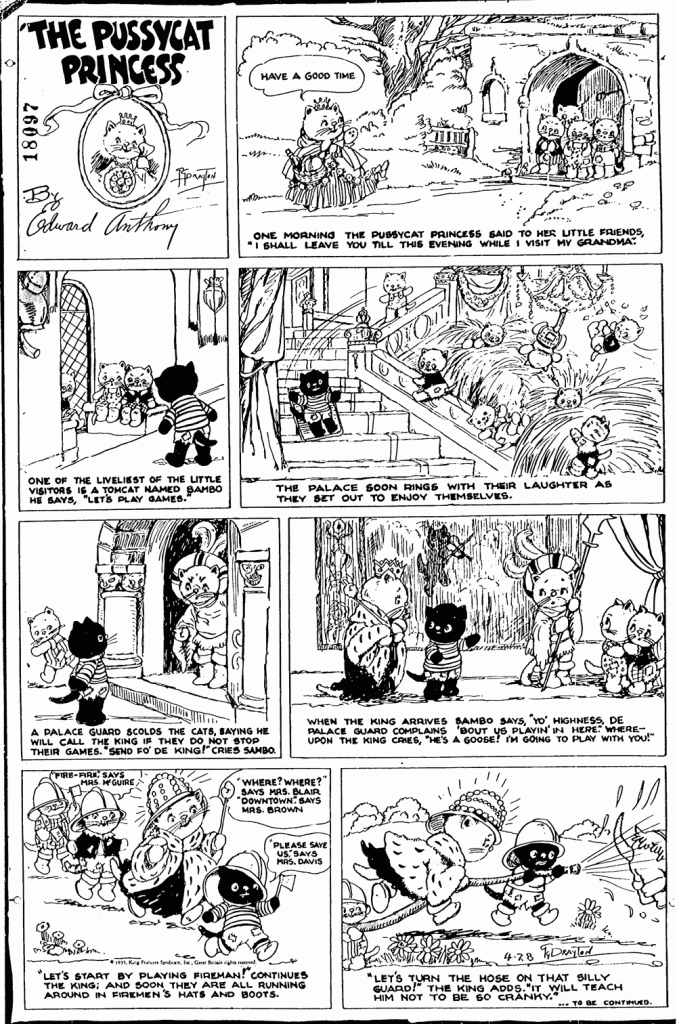 An irresponsible day at the Palace in Grace Drayton’s THE PUSSYCAT PRINCESS (April 28, 1935)

Most cats appear as secondary characters, and dogs certainly outnumber them as leads in the comics strip world. Well-remembered and beloved house cats include: Kitty, in Cliff Sterrett’s POLLY AND HER PALS, and more recently, Fatkat, in TRUDY by Jerry Marcus.

In POLLY AND HER PALS, Kitty encounters a mouse on February 3, 1938.

A more cerebral encounter with Fatkat in TRUDY on May 4, 1980

Most recently HEATHCLIFF created by George Gately over at Creators, and Jim Davis’ GARFIELD for Universal Press Syndicate are two of the most popular cat strips at this time. Last but not least, there is another frisky feline named Mooch, who is the superstar half of a cat and dog team in King Features’ MUTTS by Patrick McDonnell.

Perhaps the oddest of cat strips was the mysterious CAT by Bernard Kliban, who was famous for cat-themed art about thirty years ago. Register & Tribune put out this short-lived series. Each week, a baffling couple of cartoons featuring cats appeared.  I call it a rare foray into Zen humor for the Sunday comics world.

Next week, the DailyINK dogs will have their day. Au revoir until then,